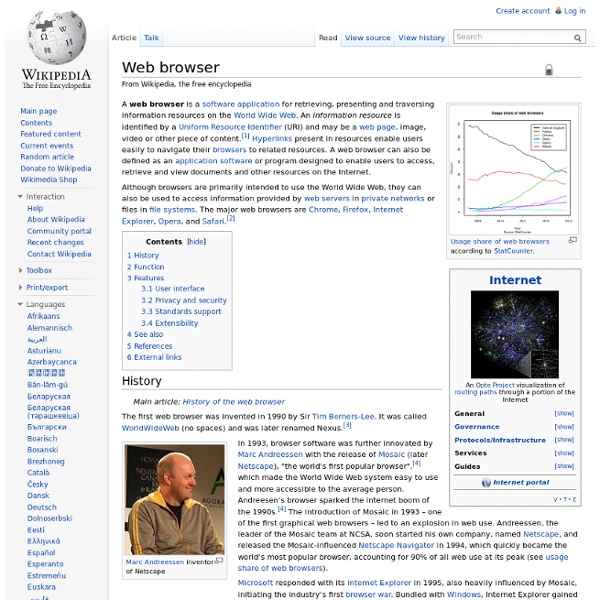 A web browser (commonly referred to as a browser) is a software application for retrieving, presenting and traversing information resources on the World Wide Web. An information resource is identified by a Uniform Resource Identifier (URI/URL) and may be a web page, image, video or other piece of content.[1] Hyperlinks present in resources enable users easily to navigate their browsers to related resources. Although browsers are primarily intended to use the World Wide Web, they can also be used to access information provided by web servers in private networks or files in file systems. History The first web browser was invented in 1990 by Sir Tim Berners-Lee. Microsoft responded with its Internet Explorer in 1995, also heavily influenced by Mosaic, initiating the industry's first browser war. The most recent major entrant to the browser market is Chrome, first released in September 2008. Business models The ways that web browser makers fund their development costs has changed over time. Related:  AJAX • Java

Web application A web application or web app is any software that runs in a web browser. It is created in a browser-supported programming language (such as the combination of JavaScript, HTML and CSS) and relies on a web browser to render the application.[1][2][3] History[edit] In earlier computing models, e.g. in client-server, the load for the application was shared between code on the server and code installed on each client locally. In contrast, web applications use web documents written in a standard format such as HTML and JavaScript, which are supported by a variety of web browsers. In 1995 Netscape introduced a client-side scripting language called JavaScript allowing programmers to add some dynamic elements to the user interface that ran on the client side. In 2005, the term Ajax was coined, and applications like Gmail started to make their client sides more and more interactive. Interface[edit] Structure[edit] There are some who view a web application as a two-tier architecture. Benefits[edit]

WiFi Finder Free Wi-Fi Hotspot Detector Ehcache | Performance at Any Scale TechCrunch Comparison of layout engines (Scalable Vector Graphics) The following tables compare SVG compatibility and support for a number of layout engines. Please see the individual products' articles for further information. Unless otherwise specified in footnotes, comparisons are based on the stable versions without any add-ons, extensions or external programs. Explanation of the tables[edit] Engine nomenclature[edit] Rather than the names of web browsers, the names of the underlying engines are used. Values[edit] Values indicate the level of support in the most recent version of the layout engine, or (if a version number is given) in the specified version. This table shows support status of different ways of embedding SVG into HTML, for different layout engines. Comparison of various Scalable Vector Graphics element support.

QMO – quality.mozilla.org | The Home of Mozilla QA Scalable Vector Graphics Scalable Vector Graphics (SVG) is an XML-based vector image format for two-dimensional graphics with support for interactivity and animation. The SVG specification is an open standard developed by the World Wide Web Consortium (W3C) since 1999. SVG images and their behaviors are defined in XML text files. This means that they can be searched, indexed, scripted, and compressed. As XML files, SVG images can be created and edited with any text editor, but are more often created with drawing software. Overview[edit] This image illustrates the difference between bitmap and vector images. SVG has been in development since 1999 by a group of companies within the W3C after the competing standards Precision Graphics Markup Language (PGML, developed from Adobe's PostScript) and Vector Markup Language (VML, developed from Microsoft's RTF) were submitted to W3C in 1998. Since 2001, the SVG specification has been updated to version 1.1. Printing[edit] Scripting and animation[edit] Compression[edit] Paths

What is Double Brace initialization in Java WebKit WebKit is available under a BSD-form license[11] with the exception of the WebCore and JavaScriptCore components, which are available under the GNU Lesser General Public License. As of March 7, 2013, WebKit is a trademark of Apple, registered with the U.S. Patent and Trademark Office.[12] Origins[edit] According to Apple, some changes involved OS X-specific features (e.g., Objective-C, KWQ,[15] OS X calls) that are absent in KDE's KHTML, which called for different development tactics.[16] Split development[edit] The exchange of code between WebCore and KHTML became increasingly difficult as the code base diverged because both projects had different approaches in coding and code sharing.[17] At one point KHTML developers said they were unlikely to accept Apple's changes and claimed the relationship between the two groups was a "bitter failure".[18] Apple submitted their changes in large patches containing very many changes with inadequate documentation, often to do with future additions.

Gecko (layout engine) Gecko is a web browser engine used in many applications developed by Mozilla Foundation and the Mozilla Corporation (notably the Firefox web browser including its mobile version and their e-mail client Thunderbird), as well as in many other open source software projects. Gecko is free and open-source software subject to the terms of the Mozilla Public License version 2. It is designed to support open Internet standards, and is used by different applications to display web pages and, in some cases, an application's user interface itself (by rendering XUL). Gecko offers a rich programming API that makes it suitable for a wide variety of roles in Internet-enabled applications, such as web browsers, content presentation, and client/server.[6] Development of the layout engine now known as Gecko began at Netscape in 1997, following the company's purchase of DigitalStyle. As Gecko development continued, other applications and embedders began to make use of it.

Chapter 1. Tutorial Intended for new users, this chapter provides an step-by-step introduction to Hibernate, starting with a simple application using an in-memory database. The tutorial is based on an earlier tutorial developed by Michael Gloegl. All code is contained in the tutorials/web directory of the project source. For this example, we will set up a small database application that can store events we want to attend and information about the host(s) of these events. The first thing we need to do is to set up the development environment. We will be using Maven in this tutorial, taking advantage of its transitive dependency management capabilities as well as the ability of many IDEs to automatically set up a project for us based on the maven descriptor. Tip It is not a requirement to use Maven. Save this file as pom.xml in the project root directory. Next, we create a class that represents the event we want to store in the database; it is a simple JavaBean class with some properties: <? Note Caution <?

Document Object Model Hierarchy of objects in an example HTML DOM—Document Object Model Legacy DOM[edit] Intermediate DOM[edit] In 1997, Netscape and Microsoft released version 4.0 of Netscape Navigator and Internet Explorer respectively, adding support for Dynamic HTML (DHTML), functionality enabling changes to a loaded HTML document. Standardization[edit] The World Wide Web Consortium (W3C), founded in 1994 to promote open standards for the World Wide Web, brought Netscape Communications and Microsoft together with other companies to develop a standard for browser scripting languages, called "ECMAScript." After the release of ECMAScript, W3C began work on a standardized DOM. DOM Level 2 was published in late 2000. DOM Level 3, the current release of the DOM specification, published in April 2004, added support for XPath and keyboard event handling, as well as an interface for serializing documents as XML. DOM Level 4 is currently being developed. Applications[edit] Web browsers[edit] Implementations[edit]