A List of Free or One-Time Payment Alternatives to Adobe Subscription Programs. A few years ago, Adobe moved to a subscription model for their Creative Suite, a decision that was fraught with controversy, particularly since many creatives felt it was a money grab. 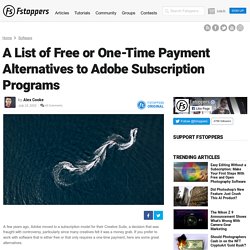 If you prefer to work with software that is either free or that only requires a one-time payment, here are some great alternatives. Photoshop GIMP (Mac/Windows/Linux: Free) GIMP (GNU Image Manipulation Program) is a robust and highly capable image editor that offers a wide array of functionality that covers the needs of the majority of photographers. Features include layers, brushes, channels, filters, automated correction tools, plug-in support, gradients, cropping, noise reduction, and more, all packaged in a fairly standard interface that does not take long to get used to, especially if you are coming from Photoshop.

Affinity (Mac/Windows/iPad: $49.99 on Mac and Windows, $19.99 on iPad) I love Affinity. Luminar 4 (Mac/Windows: $67) Luminar 4 is another favorite of mine. Lightroom Audition Premiere Photoshop. How I Photograph the Milky Way with Medium Format Film. My name is Jason De Freitas (@jase.film on Instagram), and I’m an analog photographer based in Australia. 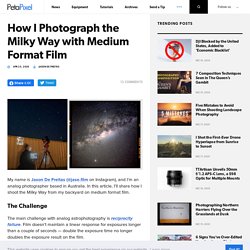 In this article, I’ll share how I shoot the Milky Way from my backyard on medium format film. The Challenge A Milky Way photo with a DSLR would normally be in the range of 20 to 30 seconds at an ISO of 1600 to 3200 if using an aperture of f/2.8. Due to reciprocity failure, this results in exposures of around 1 hour with film. A lot of people ask me why I don’t use faster speed film stocks but due to the different reciprocity characteristics of film, higher speeds generally require even longer exposure times. Shooting the Milky Way on 35mm is a good place to start because you have much faster lenses available — at an aperture of f/1.4, you’re getting an exposure duration of around 15 minutes on Provia 100 (with some pushing). My Setup. Home. I'm Back MF breathes digital life into medium format film cameras. This Picture Shows How Aperture, Shutter Speed, and ISO Affect Your Photos.

Here’s a helpful little infographic that has been floating around the Web. 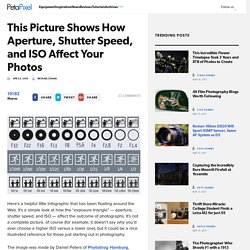 It’s a simple look at how the “exposure triangle” — aperture, shutter speed, and ISO — affect the outcome of photographs. How to Remove Fungus from a Lens. There’s nothing quite so frustrating as discovering a lens you own has developed a bad growth of fungus on the internal elements. 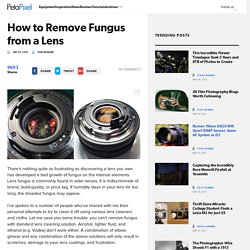 Lens fungus is commonly found in older lenses. It is indiscriminate of brand, build-quality, or price tag. If humidity stays in your lens for too long, the dreaded fungus may appear. I’ve spoken to a number of people who’ve shared with me their personal attempts to try to clean it off using various lens cleaners and cloths. Let me save you some trouble: you can’t remove fungus with standard lens cleaning solution. This Incredible Flower Timelapse Took 3 Years and 8TB of Photos to Create. Filmmaker Jamie Scott made his name in the timelapse space with Fall, a Central Park timelapse of epic proportions that took 6 months of dedication to capture. 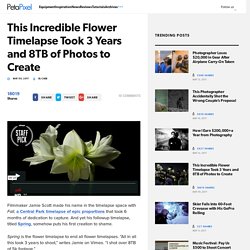 And yet his followup timelapse, titled Spring, somehow puts his first creation to shame. Spring is the flower timelapse to end all flower timelapses. “All in all this took 3 years to shoot,” writes Jamie on Vimeo. 83 Best Photoshop tutorials. Nikon FM - Wikipedia. The Nikon FM is a mechanically operated, interchangeable lens, 35 mm film, single-lens reflex (SLR) camera. 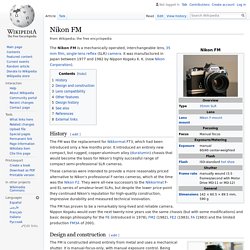 It was manufactured in Japan between 1977 and 1982 by Nippon Kogaku K. K. (now Nikon Corporation). History[edit] The FM was the replacement for Nikkormat FT3, which had been introduced only a few months prior. These cameras were intended to provide a more reasonably priced alternative to Nikon's professional F-series cameras, which at the time was the Nikon F2. The FM has proven to be a remarkably long-lived and reliable camera. Design and construction[edit] Bienvenido a Jicuri Drum. 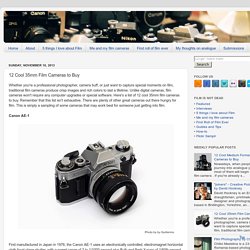 Unlike digital cameras, film cameras won't require any computer upgrades or special software. Here's a list of 12 cool 35mm film cameras to buy. Remember that this list isn't exhaustive. There are plenty of other great cameras out there hungry for film. This is simply a sampling of some cameras that may work best for someone just getting into film. Canon AE-1 First manufactured in Japan in 1976, the Canon AE-1 uses an electronically controlled, electromagnet horizontal cloth focal plane shutter, with a speed range of 2 to 1/1000 second plus Bulb and flash X-sync of 1/60th second.

After its introduction in 1976, the Canon AE-1 quickly became a very popular camera worldwide. Photography II. Graphy Forums covering every genre, brand, and idea from Photo.net. 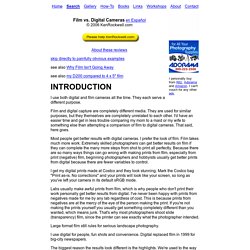