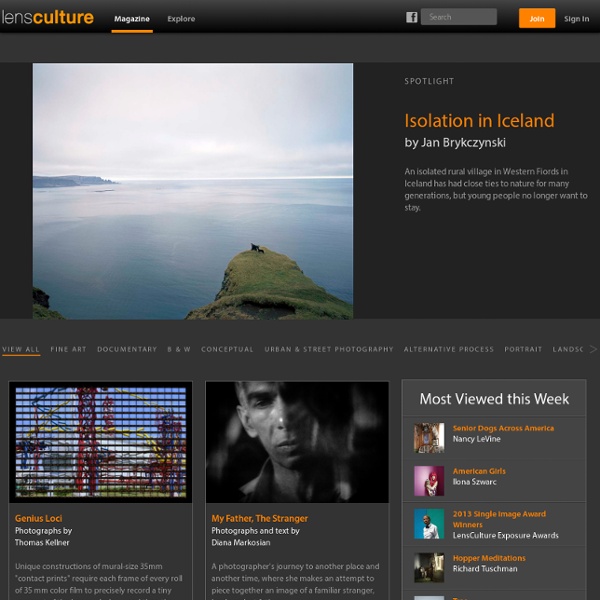 DIY - High Speed Photography at Home How to take photos like the one you are seeing here. It’s a glass of Champaign, being shot with a BB gun. It is the same idea as posted in this gallery. You can use this technique to take picture of exploding things like tomatoes, watter balloons, watermelons, or even you Canon camera as you smash it against a wall for not understanding the menus (Sorry, could not resist…) Freezing fast motion (AKA High Speed Photography), can give some pretty special photographic effects. Overview — amandacharchian.com "Four as One" for Michael Van Der Ham from Amanda Charchian on Vimeo. Quand Vas Tu Rentrer? By Amanda Charchian from Amanda Charchian on Vimeo. Close Please wait... Cole Thompson Photography cole thompson photography classic images in black & white Harbinger: \ˈhär-bən-jər\ noun 1. one that goes ahead and makes known the approach of another; herald. 2. anything that foreshadows a future event; omen; sign.

Mother Photographs Her Kids and Animals In Beautiful Russian Countryside EmailEmail Elena Shumilova is a brilliant Russian photographer, who gets her inspiration for her amazing photos from the everyday lives of her two little children, Yaroslav and Vanya, and the domestic animals they live with in the gorgeous outskirts of Andreapol, Russia. In her photography, the artist evokes long-forgotten magical realism, striking the viewer with the beauty in simple and precious things like human and animal friendship, a warm embrace, or just actually living in the moment. Take a look at Shumilova‘s photos, where kids, dogs, cats, rabbits, ducklings and geese are all one big happy family. Here are the photographer’s thoughts on photography and life that she shared with Bored Panda.

Blog Archives - Films not dead. - F.N.D Blog A New 4×5 Camera – The Intrepid Camera © The Intrepid Camera Meet The Intrepid Camera Co. which is a new camera company that makes beautiful wooden 4x5 cameras made out of... Fuji Announces The New Instax Wide 300 FUJIFILM North America Corporation announced today an expansion of the popular INSTAX line of instant film cameras... Top 100 Travel Photography Blogs - Photography Colleges Posted by Site Administrator in article Apr 13th, 2010 One incredible benefit of the Internet is the ability for travelers to share their experience with others via their blogs. This list compiles 100 of the best travel photography blogs, all of which do just that. Whether you are an art student who appreciates photography from places around the world or are an armchair travel buff, these travel photography blogs are sure to fulfill your desire for awe-inspiring photography.

More stunning black and white photography – Animal Edition (41 images) Home»Animals» More stunning black and white photography – Animal Edition (41 images) I love animals. To give you an idea of how much I love animals, when I was in Chicago this past weekend, I went to the aquarium AND the zoo. Contemporary Art The self-portraits by the Japanese artist Yasumasa Morimura, Requiem for the XX Century: Twilight of the Turbulent Gods, examines an array of historical figures and political events that have been significant in shaping the 20th century. Employing his usual methodology, Morimura uses costumes, make-up and props to create unconventional and bold renderings of iconic images from history. While Morimura’s work has traditionally investigated femininity through iconic depictions of women from art history and popular culture, this body of work examines widely disseminated images of prominent masculine figures from the last century. Each protagonist or event is cast in a moment of apogee, when history is being made and visually captured.

Atget: The Art of Documentary Photography Atget made many of his most moving and meditative photographs in the last decade of his life at the parks and gardens in and around Paris. He had worked at most of them—Versailles, Saint-Cloud, and the Luxembourg Garden—since early in his career, but these late photographs have a qualitatively different sensibility: formally bold and synthetic, they are also atmospheric, mysterious, and resonant. Their significance for Atget is suggested by the separate subseries that he set up for each near the end of his life: "Versailles," "Saint-Cloud," "Sceaux," and "Parisian Parks." Saint-Cloud (Hêtre), 1919/1921, 2002.73.15 Atget made photographs of trees throughout his career, from before 1898 until a month before he died in 1927.

Spooky, Wild Scenes Straight Out of Grimm’s Fairy Tales Like a professional location scout for Grimm fairy tale movies, photographer Kilian Schönberger seeks out and explores the less-traveled regions of Europe, searching for places that test the boundaries of fantasy and reality. The results are haunting photographs that look like they were smuggled out of a dream. The resulting series is called Brothers Grimm Homeland, for which Schönberger expertly uses framing, fog and lighting to subtly suggest the fairy tales of The Brothers Grimm. He lets our imaginations do the rest. Old mill in Eastern Bavaria, Germany.

Photographer Rigs An iPhone 4 To Helium Balloons To Take HD Videos Here is a nice concept to compete with Kite Arieal Photography, Helicopter rigged cameras and very long pole photography. A bunch of curious DIYers at Los Angeles rigged an iPhone 4 to a set of helium balloons that helped it rise about 1000 feet and take 720p videos of Los Angeles. The footage is displayed below, while it is not perfect, and kinda shaky, there is also a valuable BTS. Hit the Just for some behind the scenes and my notes of the video

Mitch Dobrowner - Fine Art Photography Growing up on Long Island (Bethpage), NY – I felt lost in my late teens. Worried about my future direction in life, my father gave me an old Argus rangefinder to fool around with. Little did he realize what an important gesture that would turn out to be for me. After doing some research and seeing the images of Minor White and Ansel Adams I quickly became addicted to photography. To make a long story short, I left home at 21, quitting my job, leaving my friends and family to see the American Southwest for myself.