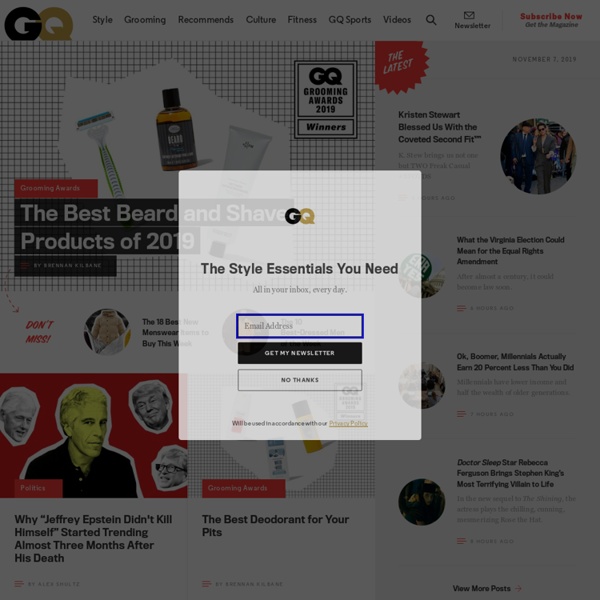 OUT MAGAZINE The True Blood and Mildred Pierce star talks about coming out as bisexual and drinking tequila with Ellen Page. Photo: Getty Evan Rachel Wood, just back from the set of a new movie (you can see some sneak peeks on her Tumblr), sat down (or was on the go — who knows when you're on Twitter!) for a chat about her coming out as bisexual in 2012, and her upcoming performance with Milla Jovovich at a fundraising event called "An Evening With Women" for the LA Gay and Lesbian Center on May 10. Midway through, as is often the case with chatting in this public way, others joined in the conversation — including TV host and chef Ted Allen, and Wood's best friend from middle school.

Fortune 500 Daily & Breaking Business News - FORTUNE on CNNMoney What is a magazine app? Fortune brings a new perspective to the iPad. Manner of Man Magazine IlGiornale.it - Le ultime notizie, attualità, politica, economia, meteo SHOTCLOTH 8th Apr 2013 | 517 notes It’s like the earth’s navel. (via alexandraelle) 6th Apr 2013 | 61,602 notes "Nor will they do any harm in all my holy mountain." People: KIM BASINGER Kim Basinger was born in Athens, Georgia—home of the famous Tree that Owns Itself (corner of Finley and Dearing, one block off Broad), stomping grounds of R.E.M. and Bubba Sparxxx. Athens, officially nicknamed “The Classic City” by those who officially nickname cities, seems deeply American, a lackadaisical college town, cobbled and redbrick, where the ghosts of fallen Confederate soldiers still patrol up and down Lumpkin Street, oblivious and diligent, keeping their phantasmal eyes upon the University grounds. That said, The Classic City seems an appropriate hometown for Kim Basinger, an American classic herself, American as applesauce. Kim Basinger—the name itself synonymous with cinematic history, conjuring Hollywood-heyday nostalgia and red-carpet reverie—is a showbiz legend, an unflagging activist, and a movie star in its truest and least bombastic sense. Kim returns to our pages in Flaunt’s 15th Anniversary, for the first time in as many years. How would you define beauty?