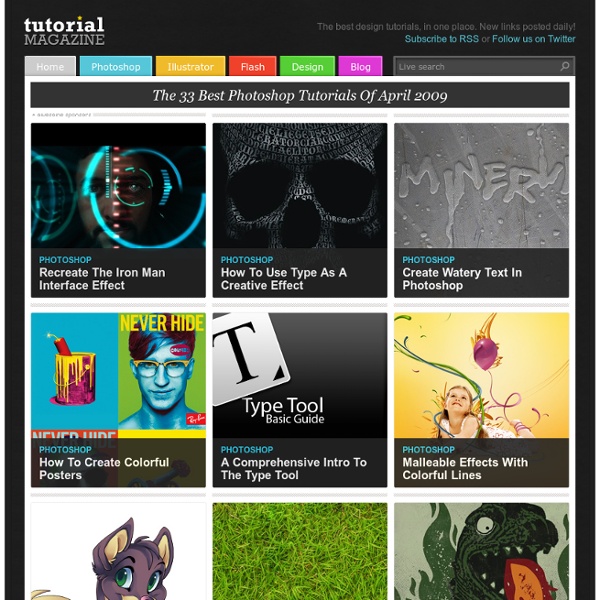 photoshop Recreate the Iron Man Interface Effect This tutorial will show you how to create the screen interface from the hit movie Iron Man. | 41410 views | by abduzeedo How to use type as a creative effect Unlock the power of the Distort tool in Adobe Photoshop to create this enigmatic image. | 35561 views | by digitalarts Create Watery Text in Photoshop No towel included. | 32799 views | by Minervity How to Create colorful posters Learn how to recreate an awesome ad campaign by RayBan, called colorize. | 26588 views | by abduzeedo A Comprehensive Intro to the Type Tool We've all used it at least once, but do you know all its potential? | 22497 views | by psdtuts Malleable Effects with Colorful Lines In this tutorial, you'll learn how to create fantastic colorful effects using only Photoshop. | 21850 views | by psdtuts How to color in lineart in photoshop When you get to this tutorial, click on the image to view the whole thing :) | 20649 views | by kuitsuku Turn a Texture into a Tiled Background

Design a Grunge Vintage Poster in Photoshop In this Photoshop tutorial I’m going to explain how to easily create a vintage poster design. We will use some useful techniques related to patterns and visual organization with Photoshop guides. Also we will play with a texture to give an old look to the composition and will deal with adjustment layers for final touches. Preview: 200++ Photoshop Photo Effects EmailEmail Have you ever wonder where is that photo effect tutorial you saw the other day and start searching all over the internet but couldn’t find what you saw initially? Honestly, i have. That is why i throw them all into this article instead. But i also use these article to gain inspiration on what to do with my photo image.

Newly Released Free Photoshop Tutorials of 2013 Just when we all believe there is not much to learn in Photoshop, Adobe launched a new product called Photoshop CC that means you still have a lot to learn while practicing new techniques and offers with the help of fresh Photoshop tutorials. There are abundance of Photoshop tutorials some of which are must to check out in order to begin designing but even then the rate of releasing new fresh Photoshop tutorials is surprising. Each new tutorial manages to trigger any designer to learn new techniques and understand the application of new style. I am sure with the launch of new Photoshop CC we will be seeing a lot more tutorials in future that reveal the potential of this cool graphic design software.

Create a Realistic Space Scene from Scratch with Photoshop In this intermediate-to-advanced-level design tutorial, we are going to create a stunning space scene that has realistic-looking planets, stars, and lighting effects using a few innovative Photoshop techniques and some textures. Final result This tutorial can have two variations, check out both versions below. 44 Grunge Photoshop Tutorials What’s up today? We’ve actually compiled a whole array of creative grunge tutorials so you can infuse staggering grungy styles into your artworks using Photoshop. Lately the grunge effect is known to be an enormously popular trend in web design, and basically it doesn’t seem to be going anywhere any time soon. So if you want to really wild on your grunge designs, you may now explore different techniques in Photoshop that can give your artwork some textured, aged and uneven looks with rusting metal signs, dirty spots, grunge patterns, scorched borders, or overall distressed accents.

Beautiful Water Effect in Photoshop CC It's been quite a long time since I played with water textures. I was checking some amazing artworks on Behance and Pinterest when I saw some examples that really inspired me to try something and learn a little bit more about Photoshop and the Displace filter. So for this tutorial I will show you how to create a really cool effect with water texture and the displace filter.

Combine Photo Elements to Create a Surreal Photo Manipulation Combine Photo Elements to Create a Surreal Photo ManipulationReviewed by Oliver Cereto on Feb 13Rating: Preview of Final Results Step 1 – Place the background The first step it’s to place the sky, our background, into the image. Mastering Illustrator Effects Have you been missing out the Illustrator Effects? Did you know it is a powerful tool for creating symmetrical shapes or adding texture to vector paths? For example, with just one simple effect, you can turn a polygon path into a flower shape. You can also make paths look sketchy with the Scribble effect. Read this tutorial to learn how to save time by using Illustrator Effects and work more efficient.