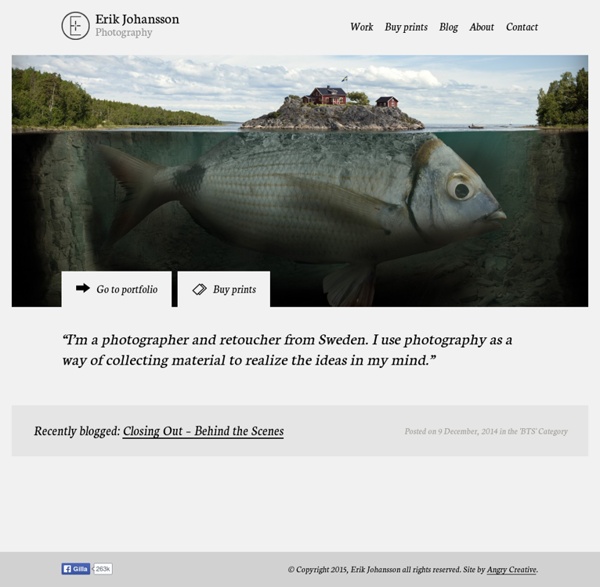 P E R S O N A L - Lachlan Bailey {image 1} 4.11.2012 ANAIS POULIOT outtakes from Twin magazine {image 1} {image 91} {image 93} {image 95} {image 97} {image 103} Best Photo Locations: Abandoned Swimming Pools © Jonathan Haeber | Catskills, NY If you’re an on-location photographer or filmmaker, then you know how much value a great location can add to the shoot. I like to find and feature supercool locations around the world. Stuff I discover, stuff that others send me, places I’d love to shoot. If the location makes you scratch your chin, laugh aloud or the hair on your arms stands up… it might be a good location to shoot something original.

Featured magazine reviews on Magpile Wildland 21st April 2014, reviewed by Hayli Chwang I was immediately drawn to the current issue of Wildland by its mesmerising cover, a photo of a lone figure silhouetted against a glowing canyon covered in snow and one of many amazing travel images to be found inside the magazine. Schell Studio Maquette Sculpting and Painting Class Maquette Sculpting and Painting Class (currently enrolling) Once again Jordu Schell is offering a Maquette Sculpting and Painting class. This class will be held at his studio: 21629 Marilla St., Chatsworth, CA 91311. Materials are included! Tattoo Photography by Jake Raynor Awesome tattoo shoots by Jake Raynor. Jake is a photographer based in New York. He shoots mostly on beauty, and gets into more and more fashion and artwork View the website