Morning Joe: The Story Of How The Mafia Became Hitmen For The CIA. Morning Joe welcomed Thomas Maier, author of "Mafia Spies: The Inside Story of the CIA, Gangsters, JFK, and Castro. 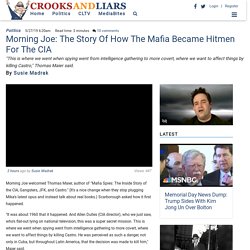 " (It's a nice change when they stop plugging Mika's latest opus and instead talk about real books.) Scarborough asked how it first happened. "It was about 1960 that it happened. And Allen Dulles (CIA director), who we just saw, who's flat-out lying on national television, this was a super secret mission.

This is where we went when spying went from intelligence gathering to more covert, where we want to affect things by killing Castro. Scarborough asked him about the Kennedy connections with Mob boss Sam Giancana. "There sure is. "My question, in the course of living this book, as you reported and wrote this book, do you think there is a truth out there that the American public does not know and might never know? " "Well, you know, Fidel Castro died at age 90 and you say, well, if there's all these CIA attempts to kill him, how did he avoid getting killed?

John F. Kennedy Assassination Flight - What Happened on the Flight from Dallas. This article originally appeared in the October 2013 issue. 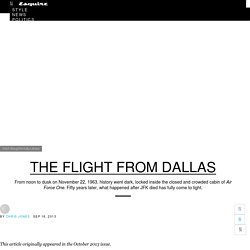 Colonel James Swindal, a handsome forty-six-year-old carpenter's son from Alabama and the pilot of Air Force One, sits in the communications shack behind his cockpit, pushing back a roast-beef sandwich. Two million dollars' worth of the latest technology buzzes around him, teletype machines and radios and three separate phone patches. Classic Who: GHW Bush and the JFK Assassination. The highly anticipated release of long-withheld US government documents related to the assassination of President John F. 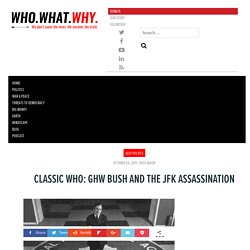 Kennedy is scheduled for this Thursday, October 26. In anticipation, the media has devoted more attention to this history-altering political murder than at any time since the hoopla surrounding Oliver Stone’s 1991 film “JFK.” On Saturday, President Trump tweeted: What Happened Thursday to the JFK Records? What happened on Thursday, Oct. 26, with the JFK records scheduled for release under the JFK Records Act? 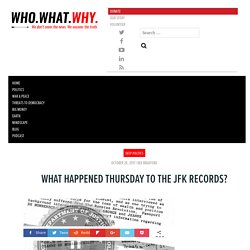 A travesty. Most news reports correctly noted the release of about 2,800 documents, but added that only a few were held back, in some cases saying “300 documents” remain withheld (see CNN, and Washington Post for example). They are off by a factor of 100. CIA Spyhunters Knew Lee Harvey Oswald Was in Dallas Days Before JFK’s Assassination. CIA urges POTUS Trump to delay release of 3,000 never-before-seen documents on assassination of John F. Kennedy. Kirkuk and its vast oil fields are now officially back under Iraqi control after years of illegal rule, first by the illegitimate ISIS terror group and since 2014 by unauthorised Kurdish militants. 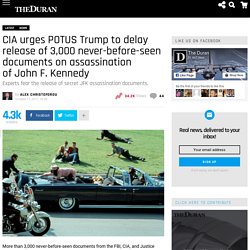 As Kirkuk falls outside of the constitutionally designated autonomous Kurdish regions of northern Iraq, there was never any legitimacy for the Kurdish regime’s rule. Video has emerged of Iraqi troops entering the city centre where they faced no resistance from fleeing Kurdish Peshmerga militants. Another video shows local Iraqis welcoming the troops as well as the Popular Mobilisation Forces (PMF) who have aided Iraqi regulars throughout the long battle against ISIS. As I reported yesterday in the The Duran, this is significant as the majority Sunni population of Kirkuk has welcomed both a majority Shi’a Iraqi army as well as entirely Shi’a PMF forces: “The Iraqi government claims to now be in full control of Kirkuk after taking the city centre and surrounding areas.

We’re on the verge of learning who assassinated JFK. President John F. 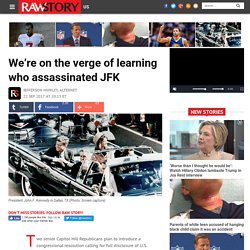 Kennedy in Dallas, TX (Photo: Screen capture) Two senior Capitol Hill Republicans plan to introduce a congressional resolution calling for full disclosure of U.S. government records related to the assassination of President John F. Kennedy in 1963. Rep. Untitled. — from Alternet The release of the last of the U.S. government's long-secret JFK assassination files by the National Archives has drawn the attention of news organizations nationwide responding to enduring interest in Kennedy's murder—the most shocking event in American history after the Japanese bombing of Pearl Harbor in 1941, and before the attacks of September 11. 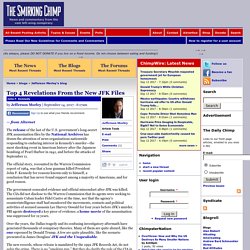 The official story, recounted in the Warren Commission report of 1964, was that a lone gunman killed President John F. Kennedy for reasons known only to himself, a conclusion that has never found support among a majority of Americans, and for good reason. The government concealed evidence and official misconduct after JFK was killed.

Over the years, the Dallas tragedy and its confusing investigatory aftermath have generated thousands of conspiracy theories. Analysis and Opinion. Following is the first in a series of commentaries by distinguished authors, researchers, and historians associated with the AARC. 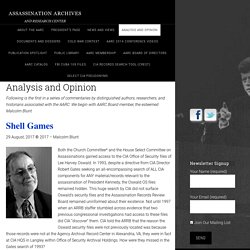 We begin with AARC Board member, the esteemed Malcolm Blunt. 29 August, 2017 © 2017 – Malcolm Blunt. Missing from the New JFK Files: Batch of CIA Records on Lee Harvey Oswald. All of the U.S. government's files on the assassination of President John F. 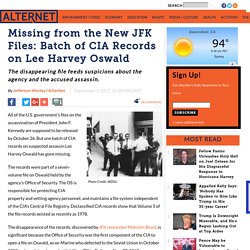 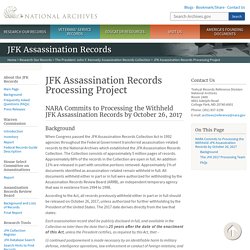 New Files Confirm the JFK Investigation Was Controlled by the CIA— Not 'Botched' as Some Pretended. Photo Credit: White House Press Office (WHPO) [Public domain], via Wikimedia Commons In May 1964, top CIA officials stonewalled the official investigation of the murder of President John F. Kennedy by concealing or downplaying evidence about the Cuban contacts of the accused assassin, according to newly declassified documents. The documents, released online last month by the National Archives, show how two CIA spymasters concocted a series of false and misleading statements that served to steer the Warren Commission investigation away from evidence that might point to a conspiracy.

J_Norwood. Part I: Peeling Away the Layers of the Legend The documentary record of Lee Harvey Oswald’s life may be categorized in three chronological periods:#1: The first stage of the documentary record runs from his birth until late 1962. The surviving records point to a composite identity of two young men whose life stories were merged into a single biography of a young man for purposes of the “Oswald Project. " The goal of this top-secret project was the successful planting of a Russian-speaking spy in the Soviet Union at the height of the Cold War.

In light of this evidence, the lives of two boys were conflated into the single “legend” of Oswald as a truant, a high school dropout, and a Marxist sympathizer. Harvey & Lee Home Page. Guns. Oswald Did NOT Purchase a Rifle from Kleins by John Armstrong For nearly 50 years the public has been confused and purposely misled by a systematic and continuous barrage of disinformation relating to the assassination of President Kennedy.

This began with the illusion that Oswald was the lone assassin. This illusion was created by the Warren Commission, based upon altered and fabricated FBI reports and documents, and continued with the House Select Committee on Assassinations, and was continuously promoted with an endless stream of Oswald-did-it books and made-for-TV documentaries. Over the years numerous books were written about the life of Lee Harvey Oswald by his mother, his widow, and his brother--people who allegedly knew Oswald better than anyone. But these books in particular are filled with inaccuracies and were designed and promoted to fool and confuse the public about the life and background of Lee Harvey Oswald.

KLEIN'S MICROFILM. IRVING SPORTS SHOP. Lee Harvey Oswald's Carcano Rifle - Shooting It Today - GunsAmerica Digest. Abraham Bolden & Thomas Vallee are keys to the JFK assassination – The Tin Whistle. Twenty-three days before the assassination of JFK in Dallas, Lee Harvey Oswald walked into the FBI offices in Dallas and delivered a handwritten note for agent James Hosty. After JFK’s murder, Hosty was ordered to destroy this note and it took many years to uncover what that note might have said and why it had to be destroyed immediately after the assassination. The official story given by Hosty was it contained “some sort of threat,” but that later changed to the more ludicrous: “stay away from my wife.”

In fact, the note most likely claimed that a four-man assassination team had assembled in Chicago for the purpose of assassinating JFK on his way to Soldier Field for the annual Army-Air Force football game, an assassination scheduled to take place on November 2. JFK Assassination: Articles by Grover Proctor. Now Published! A greatly expanded, revised, and updated article onThe Raleigh Call and the Fingerprints of Intelligence,for the first time utilizing the declassified files and documents from the House Select Committee on Assassinations, and pulling together everything we now know about the Raleigh Call.CLICK HERE TO READ. Two Video Presentations: JFK and the Questions That Still Haunt Us. There was a time, not so long ago, that when phones rang, you had no idea who was calling. Call it the Russian roulette phone challenge, but it could have been anyone calling, and even more so when you’re editor-in-chief-ing high-profile magazines in Los Angeles.

“Is this Eugene Robinson?” JFK at 100: 'His life was not as glamorous as you think' Neutron Activation Analysis Evidence in the JFK Assassination. What is Neutron Activation Analysis? Neutron activation analysis is currently the most sensitive and reliable method of measuring quantities of elements within compounds. 74 elements are susceptible to NAA, which can detect quantities in the range of parts per billion. NAA usually takes place within nuclear reactors. State Secret Chapter1. Wiretapping in Mexico City, Double Agents, and the Framing of Lee Oswald by Bill Simpich. State Secret Chapter6. On November 22, 1963, President John F. Kennedy was shot at 12:30 pm. Johnny Carson interviews Jim Garrison : Pittsburgh Indymedia.

Johnny Carson interviews Jim Garrison by reposted Tuesday, Mar. 28, 2006 at 1:42 PM. The Witness: Howard Brennan. Howard Brennan: "Brennan...appears to be one of those self-promoting bystanders who because of....the need to be associated with some great tragedy -- pretend knowledge of the event when they actually have no information. " ( Gerald McKnight, Breach of Trust, pg. 398 )