More JFK and the Assassination

The JFK Assassination: The Two Best Books Published Last Year. As far as the assassination is concerned, it is my belief that there was a conspiracy, because there were those that disliked [President Kennedy] and felt the only way to get rid of him was to assassinate him. 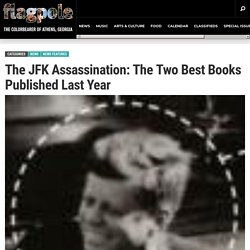 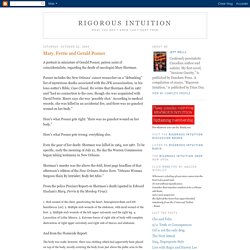 Posner includes the New Orleans' cancer researcher on a "debunking" list of mysterious deaths associated with the JFK assassination, in his lone-nutter's Bible, Case Closed. He writes that Sherman died in 1967 and "had no connection to the case, though she was acquainted with David Ferrie. Marrs says she was 'possibly shot.' According to medical records, she was killed in an accidental fire, and there was no gunshot wound on her body. " Here's what Posner gets right: "there was no gunshot wound on her body.

" Here's what Posner gets wrong: everything else. In the death of Doctor Mary Sherman, strange myths pale next to stranger facts. Mary S. Sherman. Mary Stults, the daughter of a voice teacher, was born in Evanston, Illinois in 1913. 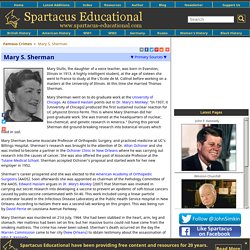 A highly intelligent student, at the age of sixteen she went to France to study at the L’Ecole de M. Collnot before working on a masters at the University of Illinois. At this time she married Thomas Sherman. The Project and the Death of Mary Sherman MD. Unethical Human Experiments, Carcinogenic Viruses, and Murder during the Cold War. by James Stewart Campbell, MD. 2013 In the early morning of July 21, 1964, renowned orthopedic cancer researcher, Doctor Mary Stults Sherman, MD, age 51, was found dead in her New Orleans apartment. 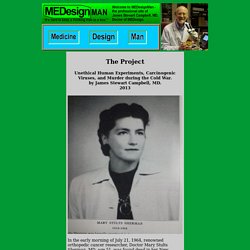 She had been stabbed multiple times and her body partially but severely burned. There was only minor fire damage to the apartment, however, and no indication of forced entry or signs of a struggle. JFK Facts » St. John Hunt. The JFK Mistress Mary Pinchot Meyer Was Gunned Down in Cold Blood. Why? People who knew her could never forget her. 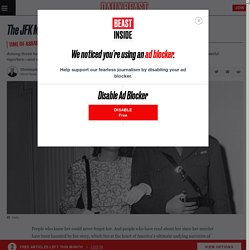 And people who have read about her since her murder have been haunted by her story, which lies at the heart of America’s ultimate undying narrative of romance and conspiracy. The death of Mary Pinchot Meyer is linked forever to that of President John F. Kennedy, for whom she was one lover among many, but not like the others. And when she was killed on the towpath of what was then a derelict canal at the edge of the nation’s capital in October 1964—a shot in the head and a shot next to the heart—11 months after Kennedy was murdered, her story quickly folded into his as a tragic subplot. THE MANNLICHER-CARCANO FIRING TEST.

MEMORANDUM TO: ALL COMMITTEE MEMBERS FROM: G. 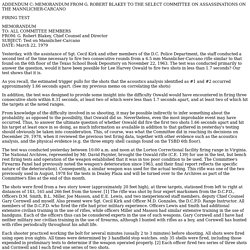 Robert Blakey, Chief Counsel and Director SUBJECT: Test on Mannlicher-Carcano DATE: March 22, 1979. The Men That Dont Fit In Roderick A. MacKenzie III 1. The Murder of John Kennedy’s Mistress, Part 1 - WhoWhatWhy. On October 12, 1964, Mary Pinchot Meyer, a Washington socialite, went for her usual jog along the Potomac River in a fairly deserted section of Washington DC and, for no apparent reason, she was shot twice at close range. 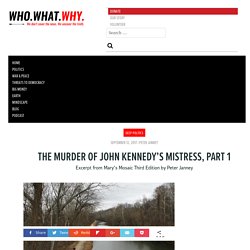 She was neither raped nor robbed. A witness, who heard screaming and shots ran to an embankment overlooking the scene, arrived in time to see a black man standing over Meyer’s body. He said the man stared at the woman for a bit, then put a dark object in his pocket, presumably a gun, and calmly walked away. The witness, Henry Wiggins Jr., saw the gunman from a distance of 128.6 feet, and described him as a “negro” who was 5 feet 8 to 5 feet 10 inches tall, weighing about 185 pounds. Not long afterward, the police arrested a “negro” and Wiggins positively identified him — even though he was only 5 feet 3.5 inches, and weighed 130 pounds. What Was Lee Harvey Oswald Doing in Russia? - Foundation for Economic Education - Working for a free and prosperous world.

An Amazon search for books about Lee Harvey Oswald unearths endless reading that would last several lifetimes for all but the very bookish. 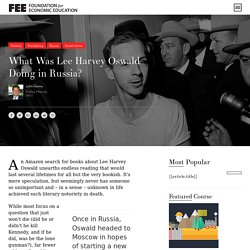 It's mere speculation, but seemingly never has someone so unimportant and – in a sense – unknown in life achieved such literary notoriety in death. Once in Russia, Oswald headed to Moscow in hopes of starting a new life as a Soviet citizen.While most focus on a question that just won't die (did he or didn't he kill Kennedy, and if he did, was he the lone gunman?) , far fewer address Oswald's time in the Soviet Union. That's what's so interesting about Peter Savodnik's 2013 book The Interloper: Lee Harvey Oswald Inside the Soviet Union. Most interesting for this reader were the various economic anecdotes that Savodnik unearthed in his extensive research of Oswald's rather staged (by the KGB) life in Minsk. Unhappy Guy Perhaps unsurprisingly, Oswald's pre-Soviet life was defined by unhappiness and uncertainty. Mugged by Reality No Programming Works Begins. How the KGB Duped Oliver Stone.

Helping defeat Hillary Clinton is not the most successful influence operation Moscow has ever mounted against the United States. 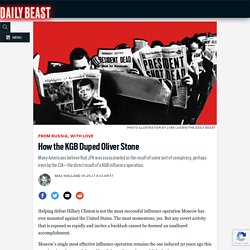 The most momentous, yes. But any covert activity that is exposed so rapidly and incites a backlash cannot be deemed an unalloyed accomplishment. Moscow’s single most effective influence operation remains the one induced 50 years ago this month, when the now-defunct New Orleans States-Item published a front-page story on April 25, 1967, entitled “Mounting Evidence Links CIA to ‘Plot’ Probe.” It was an operation that culminated in an unimaginable success—a Hollywood blockbuster by Oliver Stone contending that the CIA was behind JFK's assassination. Trump-really-war-cia-jury-still-out?akid=15346.2617. Photo Credit: JFK Library From the fever swamp of Alex Jones' InfoWars, Jerome Corsi reports that "JFK researchers" are saying President Donald Trump is at risk for assassination because of his differences with the Central Intelligence Agency. 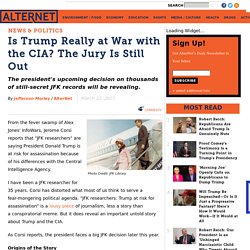 I have been a JFK researcher for 35 years. Corsi has distorted what most of us think to serve a fear-mongering political agenda. Who Was Jack Ruby? Illustrated by Greg King All I know about the best man in my wedding is he didn’t exist. Five days before John F. The Harold Weisberg Archive. Ruminations on the Greatest Mystery Never Solved. At the recent JFK Lancer conference in Dallas, WhoWhatWhy Editor-in-Chief Russ Baker spoke to a group dedicated to finding out the full truth behind the assassination of President John F.

Kennedy. Though supposedly the matter was settled long ago, most Americans don’t believe the Warren Commission’s hasty, FBI-driven verdict. Nor was that verdict acceptable to the House Select Committee on Assassinations (of the 1970s) which concluded that the president had most likely been killed as a result of a conspiracy, though it failed to resolve the particulars. Yet, all kinds of people keep trying, at their own expense, to solve the mystery. “There is a tremendous debt owed to this amazing bunch of people who do this stuff selflessly their whole lives … This may be the greatest revelation out of the whole thing if nothing else, the fundamental goodness, decency, and tenacity” of truth-seeking investigators in the U.S. and around the world, Baker said.

Full Text Transcript: Audience claps Laughter. Prayer Man @ Prayer Man. JFK Assassination: Prayer Man is Lee Harvey Oswald. McCone/Rowley. A document, clearly the smoking gun that Oswald was in the employee of the CIA, came to light and was widely circulated on the Internet. The question, however, remains: is it genuine? The entire document will be typed herein, as I cannot cut and paste it and still make it readable. It is a "United States Government" Memorandum dated March 3, 1964 (stamped "Confidential" and is from "Mr.