Ian Griggs, No Case To Answer. No Case To Answer: A retired English detective's essays and articles on the JFK Assassination, 1993-2011 UPDATED by Ian Griggs As a retired police officer in the UK (uniform and CID, 1971-1994) it is only natural that one of my specialist areas of research into the JFK assassination should centre upon the Dallas Police Department. 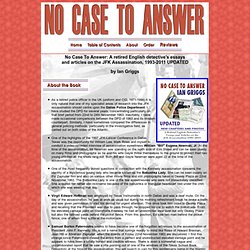 I have studied the DPD for several years, concentrating particularly on that brief period from 22nd to 24th November 1963. Inevitably, I have made occasional comparisons between the DPD of 1963 and its modern counterpart. JFK and the Assassination. The Men Who Killed Kennedy: Part 7 Smoking Guns. WikiMindMap. The Men Who Killed Kennedy - Part 8 - The Love Affair (2003)

The Men Who Killed Kennedy - Part 9 - The Guilty Men (2003) Amazon. The J.F.K Assassination's Theories. 10 Best JFK Conspiracy Theories. Less than a second after the fatal bullet hit President Kennedy As we pointed out in an earlier article on JFK assassination theories, the thirst for information surrounding US President John F. 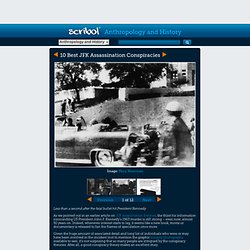 Kennedy’s 1963 murder is still strong – even now, almost 50 years on. Indeed, whenever interest starts to lag, it seems like a new book, movie or documentary is released to fan the flames of speculation once more. Given the huge amount of associated detail and long list of individuals who were or may have been involved in the incident (not to mention the graphic autopsy photographs available to see), it’s not surprising that so many people are intrigued by the conspiracy theories. After all, a good conspiracy theory makes an excellent story. With this in mind, we present 10 incredible JFK conspiracy theories. Yohani Kamarudin Scribol Staff. Missing Files: The JFK Assassination. 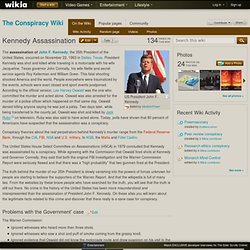 Kennedy, the 35th President of the United States, occurred on November 22, 1963 in Dallas, Texas. President Kennedy was shot and killed while traveling in a motorcade with his wife Jacqueline, Texas governor John Connally, his wife Nellie and secret service agents Roy Kellerman and William Greer. This fatal shooting shocked America and the world. People everywhere were traumatized by the events, schools were even closed and sport events postponed. DVP's POTPOURRI: FOUR DAYS IN NOVEMBER (1964 DAVID L. WOLPER DOCUMENTARY FILM) (REVIEWS & VIDEOS) THE JFK ASSASSINATION: AS IT HAPPENED. John F. Kennedy assassination conspiracy theories. The circumstances surrounding the assassination of John F.

Kennedy on November 22, 1963, spawned suspicions of a conspiracy. These suspicions were mitigated somewhat when an official investigation by the Warren Commission concluded the following year that there was no conspiracy. Since then, doubts have arisen regarding the Commission's controversial finding that only Lee Harvey Oswald was responsible for the assassination of Kennedy, and most Americans believe that others besides Oswald were also involved in the assassination.[1] Critics have argued that the Commission and the government have covered up crucial information pointing to a conspiracy. JFK, 9-11, and the REAL America. The Men Who Killed Kennedy: Part 5 The Witnesses. Kennedy Assassination. 50th Anniversary Commemoration. No One Knows the Full Story of What Happened. Fifty Years Later, Kennedy Shooting Less Certain than Lincoln Conspiracy 50 th anniversary commemorations of the assassination of President John F. 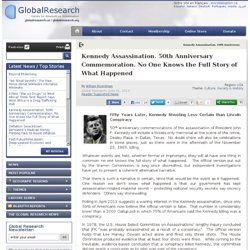 Kennedy will include a tickets-only memorial at the scene of the crime, Dealey Plaza, in Dallas, Texas. No doubt there will also be celebrations in some places, just as there were in the aftermath of the November 22, 1963, killing. Whatever events are held, whether formal or impromptu, they will all have one thing in common: no one knows the full story of what happened.

The official version put out by the Warren Commission, is long since discredited, but independent investigations have yet to present a coherent alternative narrative. That there is such a narrative is certain, since that would be the event as it happened. SHOCKING: Video unreleased JFK assassination. JFK MURDER SOLVED. The Assassination of JFK (BBC Documentary) JFK Conference. John F. 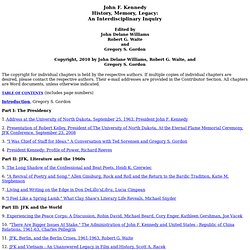 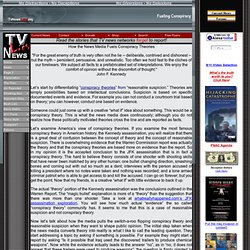 Too often we hold fast to the cliches of our forebears. We subject all facts to a prefabricated set of interpretations. We enjoy the comfort of opinion without the discomfort of thought. "John F. Let’s start by differentiating “conspiracy theories” from “reasonable suspicion.” Someone could just come up with a creative “what if” idea about something. 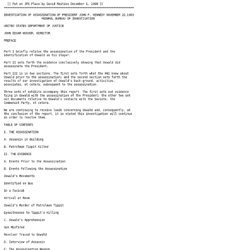 KENNEDY NOVEMBER 22,1963 FEDERAL BUREAU OF INVESTIGATION UNITED STATES DEPARTMENT OF JUSTICE JOHN EDGAR HOOVER, DIRECTOR PREFACE Part I briefly relates the assassination of the President and the identification of Oswald as his slayer. Part II sets forth the evidence conclusively showing that Oswald did assassinate the President. Part III is in two sections. JFK's Secret Service agents reflect on loss of a president. JFK and the Secret Service President John F. 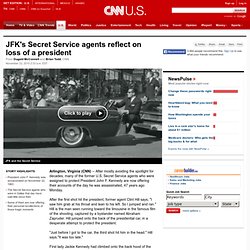 Kennedy was assassinated on November 22, 1963The Secret Service agents who were in Dallas that day have said little since thenSome of them are now offering their personal recollections of those tragic moments Arlington, Virginia (CNN) -- After mostly avoiding the spotlight for decades, many of the former U.S. Secret Service agents who were assigned to protect President John F. Kennedy are now offering their accounts of the day he was assassinated, 47 years ago Monday. After the first shot hit the president, former agent Clint Hill says, "I saw him grab at his throat and lean to his left. The Assassinations of the 1960s as “Deep Events” Peter Dale Scott October 17, 2008 For over two years now I have been speaking and writing about what I call deep events. 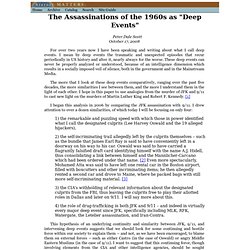 I mean by deep events the traumatic and unexpected episodes that recur periodically in US history and alter it, nearly always for the worse. These deep events can never be properly analyzed or understood, because of an intelligence dimension which results in a socially imposed veil of silence, both in the government and in the Mainstream Media. The more that I look at these deep events comparatively, ranging over the past five decades, the more similarities I see between them, and the more I understand them in the light of each other.

I hope in this paper to use analogies from the murder of JFK and 9/11 to cast new light on the murders of Martin Luther King and Robert F. I began this analysis in 2006 by comparing the JFK assassination with 9/11. Oswald’s and Sirhan’s Alleged Self-Incriminating Behavior at Rifle Ranges This is what Malcolm H. JFK Assassination Part 1A. The CIA and the JFK Assassination. CIA Headquarters in Langley,Virginia "And ye shall know the truth, and the truth shall make you free. 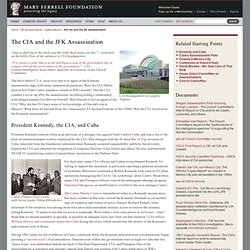 " - enshrined on the lobby floor of the entrance to CIA headquarters. "It is inconceivable that a secret intelligence arm of the government has to comply with all the overt orders of the government. " - CIA CounterIntelligence head James Angleton, in testimony to the Church Committee. The three letters C.I.A. recur over and over again in the Kennedy assassination saga, with many unanswered questions. Were the CIA-Mafia plots to kill Fidel Castro somehow related to JFK's murder? Did the CIA conduct a cover-up after the assassination, including hiding a relationship with alleged assassin Lee Harvey Oswald? JFK, The Kennedy Detail, and more: Emory Roberts: THE REAL STORY. Agent Emory P. Roberts (ATSAIC, Commander of the Secret Service follow-up car): A native of Cockeysville, Maryland, Roberts had previously served with the Maryland State Police, the Baltimore County Police, and as an investigator for the Office of Price Administration.28 Secret Service agent Emory P.

JFK-ASSASSINATED by the U.S. Government. Absolute Proof of JFK Assassination Conspiracy Part 1. Assassination of John F. Kennedy. Although the Commission's conclusions were initially supported by a majority of the American public,[4] polls conducted between 1966 and 2003 found that as many as 80 percent of Americans have suspected that there was a plot or cover-up.[5][6] A 1998 CBS News poll showed that 76% of Americans believed the President had been killed as the result of a conspiracy.[7] A 2013 AP poll showed, that although the percentage had fallen, more than 59% of those polled still believed that more than one person was involved in the President's murder.[8][9] A Gallup Poll in mid-November 2013 showed 61% believed in a conspiracy and 30% thought Oswald did it alone.[10] In contrast to the conclusions of the Warren Commission, the United States House Select Committee on Assassinations (HSCA) concluded in 1978 that Kennedy was probably assassinated as a result of a conspiracy.

Kennedy was assassinated as he rode in a motorcade through Dealey Plaza in downtown Dallas, Texas. Extraterrestrial life.