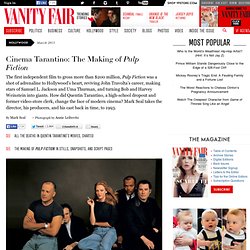 Does it stay this good?’ ” remembers Gladstein. He called again an hour later, having read to the point where the main character, the hit man Vincent Vega, is shot and killed. 10 Captivating Documentaries About Silence, Solitude, And Strange People. Travel is fatal to prejudice, bigotry, and narrow-mindedness, and many of our people need it sorely on these accounts. ~ Mark Twain, The Innocents Abroad. 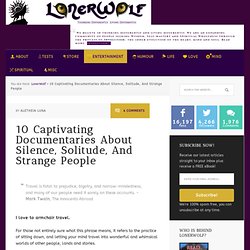 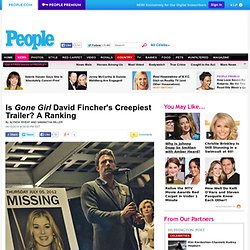 'A Million Ways to Die in the West' trailer. Harvard discovers three of its library books are bound in human flesh. There's something undeniably creepy about big, expansive libraries. The hushed whispers, the almost artificial quiet, and the smell of dusty tomes combine to create a surreal experience. But when it comes to creepy libraries, Harvard University might take the cake... you see, at least two of its books are bound in human skin. A few years ago, three separate books were discovered in Harvard University's library that had particularly strange-looking leather covers. Upon further inspection, it was discovered that the smooth binding was actually human flesh... in one case, skin allegedly harvested from a man who was flayed alive.

Yep, definitely the creepiest library ever. As it turns out, the practice of using human skin to bind books was actually pretty popular during the 17th century. Harvard's creepy books deal with Roman poetry, French philosophy, and a treatise on medieval Spanish law for which the previously mentioned flayed skin was supposedly used. Feature Image via Brian Wilson. Jake Gyllenhaal takes on a double role in the downbeat psycho-sexual thriller ‘Enemy.' 'The Signal' Trailer: Terrifying And Fragmented [Trailer + Pictures] The general synopsis for The Signal reads like a how-to on clichés from both the sci-fi and horror film genres. 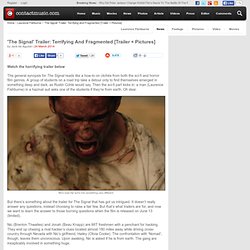 Russell Crowe is a convincing title character in the ambitious, often impressive biblical epic ‘Noah' The result is a movie that is clearly deeply respectful of its source material but also at times startlingly revisionist, a go-for-broke throwback to Hollywood biblical epics of yore that combines grandeur and grace, as well as a generous dollop of goofy overstatement. 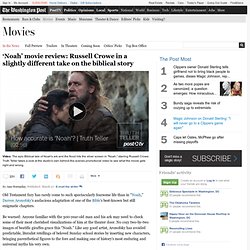 Viewers may not agree about what they’ve seen when they come out of “Noah.” But there’s no doubt that Aronofsky has made an ambitious, serious, even visionary motion picture, whose super-sized popcorn-movie vernacular may occasionally submerge the story’s more reflective implications, but never drowns them entirely. Noah: Film Review. Darren Aronofsky wrestles one of scripture's most primal stories to the ground and extracts something vital and audacious, while also pushing some aggressive environmentalism, in Noah. Whereas for a century most Hollywood filmmakers have tread carefully and respectfully when tackling biblical topics in big-budget epics aimed at a mass audience, Aronofsky has been daring, digging deep to develop a bold interpretation of a tale which, in the original, offers a lot of room for speculation and invention.

The narrative of the global flood that wiped out almost all earthly life is the original disaster story, one that's embraced by most of the major world religions, which means that conservative and literal-minded elements of all faiths who make it their business to be offended by untraditional renditions of holy texts will find plenty to fulminate about here. PHOTOS: 'Noah's' Berlin Premiere, Emma Watson, Jennifer Connelly, Douglas Booth Flood the Red Carpet. 8 Great Canadian Music Videos that DIDN'T make the Prism Prize Shortlist. The Prism Prize, Canada's award for excellence in music videos, will be chosen this Sunday. 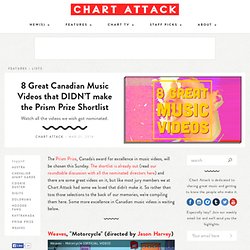 The shortlist is already out (read our roundtable discussion with all the nominated directors here) and there are some great videos on it, but like most jury members we at Chart Attack had some we loved that didn't make it. So rather than toss those selections to the back of our memories, we're compiling them here. Some more excellence in Canadian music videos is waiting below. 10 Stephen King Short Stories That Should Be Films. 10 Documentaries About Life In The Biosphere Streamable Online. 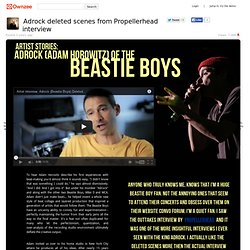 "I didn't know that was something I could do," he says almost dismissively. "And I did. And I got into it" But under his moniker "Adrock" and along with the other two Beastie Boys, Mike D and MCA, Adam didn't just make beats... he helped invent a whole new style of beat collage and layered production that inspired a generation of artists that would follow them. The Beastie Boys have an uncanny ability to convey fun and experimentation - perfectly maintaining the humor from their early jams all the way to the final master. It's a feat not often duplicated for many who let the perfectionism, quantization, and over-analysis of the recording studio environment ultimately deflate the creative output. The Voyager Mission and the Golden Record. Last September, the Times reported that Voyager 1, the hardy spacecraft launched in 1977, had exited the solar system and entered the interstellar void. Whenever stories about Voyager 1 and Voyager 2 appear in the papers, I read every word, transfixed: I was nine years old when the vessels began their journeys outward, and avidly followed news of their early progress.

When, in 1981, I changed schools, a favorite teacher gave me a copy of Carl Sagan’s book “Murmurs of Earth,” which describes the Golden Record affixed to both Voyagers—a disk containing greetings, natural sounds, pictures, and music, intended to document human civilization for the possible benefit of extraterrestrial beings. Calle 13's René "Residente" Pérez on Revolutionary Music, WikiLeaks & Puerto Rican Independence. This is a rush transcript. 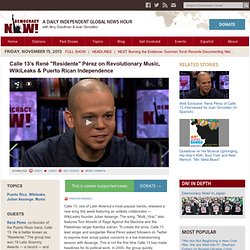 Copy may not be in its final form. JUAN GONZÁLEZ: One of Puerto Rico’s popular bands is out with a new song this week with an unlikely collaborator. On Wednesday, the band Calle 13 released their latest tune titled "Multi_Viral. " It features the voice of WikiLeaks founder Julian Assange. Top 10 Intellectual Rappers. Music Despite being in the mainstream consciousness for over twenty years now, Hip-Hop is still largely thought to consist solely of idiotic, crude and often pointlessly violent lyrics that debase and malign the English language. 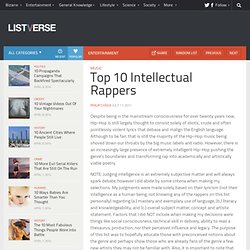 Although to be fair, that is still the majority of the Hip-Hop music being shoved down our throats by the big music labels and radio. Top 100 - Classical Music Best Famous Popular Kickass. It's the top Classical Music from movies, songs, commercials, cartoons, video games and ringtones. 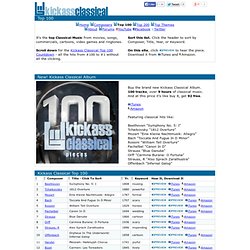 Scroll down for the Kickass Classical Top 100 Countdown - all the hits from #100 to #1 without all the clicking. Sort this list. Click the header to sort by Composer, Title, Year, or Keyword. On this site, click to hear the piece. iTunes and Amazon.

The writer in that opening scene, Jep Gambardella (Toni Servillo), could almost be an older version of the Marcello Mastroianni character in “La Dolce Vita.” Having published one very successful novel 40 years ago, Jep became “King of the High Life” and never penned another, instead doing just enough journalistic work to keep him in contact with everyone worth knowing in the city. 'Maleficent' trailer: 'Dream' See Quvenzhane Wallis sing in the new 'Annie' trailer. 'Bad Grandpa' Movie Review. 19 Art Documentaries You Shouldn't Miss — Art Biz BlogName.

‘Guardians Of The Galaxy' Landing On Earth Soon. Marvel Studios’ Guardians of the Galaxy will soon leap out from print and into the big screen. Geraldine - short film by Arthur de Pins.

Town with so Perfect Views. Drawing. Free art lessons - teach yourself how to draw, paint and design. Drawing and Painting. 100 Awesome Art Lessons on YouTube. PersonalNote. The Academy of Art university. Painting. Writing. Write & Get Paid.

Books. One Page Per Day: A web typewriter for authors. Project #20. Guide for Writers: French Phrases. Overcoming Writer's Block and the Indolent writer. How to Write an Article in 13 Steps That Blow People Away.