JFK and the Assassination

Digging Up Lee Harvey Oswald. I was 6 when Don José surprised me with some cookies and milk before bed. 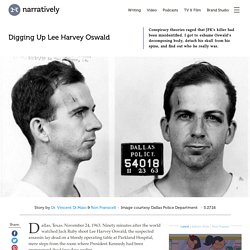 I got so sleepy. The next day I woke up all bloody, with a cut on my ankle. Mami and my sister Valery washed me and bandaged my wound. It was not only my ankle that hurt. Everywhere, my body was sore. This was in Tijuana, where I had moved with my mother and five sisters, in 1962, four years after I was born further south, in the Mexican state of Jalisco. Don José (whose name, like mine and others in this story, has been changed to protect my identity) was a middle-aged laborer whose distinguishing feature was his yellow teeth.

After the night he offered me cookies, Don José would often come get me from the bed I shared with my sister Lupe. The abuse continued for three years until one day Don José tried to molest my younger sister, Berta. That’s when I told Mami, “He does a lot of wrong things to me.” Valery said, “Mami, she’s been raped for many years.” Although small in stature, Mami was strong. “No! “No! The Last Words of Lee Harvey Oswald - Statement Analysis® In the 1970s, Mae Brussell, an authority on the Kennedy assassination, compiled every statement she could find made by Lee Harvey Oswald between the time of his arrest for the shooting of President John F. 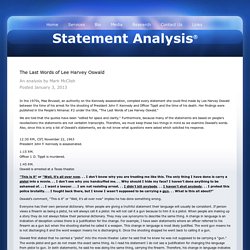 Kennedy and Officer Tippit and the time of his death. Jason Bermas on Oswald, the CIA and de Brueys. What Really Happened? By my count, there have been 44 documentaries, docu-dramas and news specials that have aired during this 50th anniversary of the JFK murder.All 44 have somehow "concluded" that Lee Harvey Oswald was the lone nut assassin of President Kennedy. 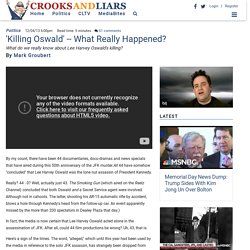 Really? 44 - 0? Well, actually just 43. The Smoking Gun (which aired on the Reelz Channel) concluded that both Oswald and a Secret Service agent were involved. Although not in cahoots. Johnny Carson interviews Jim Garrison. Johnny Carson: This particular program came around in a peculiar set of circumstances. 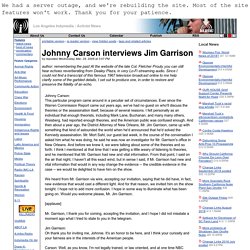 Ever since the Warren Commission Report came out years ago, we've had no guest on who'll discuss the theories or the assassination itself, because of several reasons. I felt personally as an individual that enough theorists, including Mark Lane, Buchanan, and many many others, Weisberg, had reported enough theories, and the American public was confused enough. And then about a year ago, the District Attorney of New Orleans, Mr. Kennedys And King - JFK Declassified: Tracking Oswald. The six-part series “JFK Declassified: Tracking Oswald” (History Channel, Tuesdays, 10 PM EDT) went on the air this week. 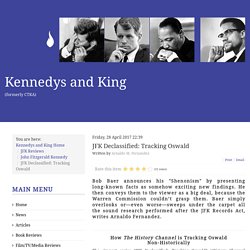 To give weight to the presentations, the host is a former CIA agent, Bob Baer. Baer boasts that no one else, except him, has analyzed the more than two million pages of declassified documents about the JFK assassination which the Assassination Records Review Board has released. Not everyone who reaches back into history can survive intact. Baer doesn’t make it because of Shenonism.1 At the very beginning of the series he more or less announces this by presenting long-known facts as somehow exciting new findings.

Real History Blog. CIA’s Vietnam Illegal Drug Trafficking, JFK’s Assassination. Perhaps the biggest secret of the Vietnam War is that our Central Intelligence Agency seized control of the infamous Golden Triangle during that time period, then, along with assistance from various elements of Organized Crime, shipped huge amounts of heroin out of that area into our country. by Victor Thorn NOTE: The information below is derived from Michael Collins Piper’s Final Judgment. 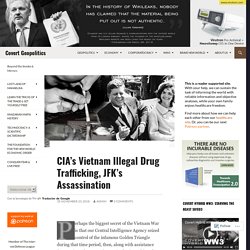 My role is that of a reviewer, and all credit for the research must be given to Mr. Piper. I urge everyone to purchase a copy of this book. Rush to Judgment (1966) Scientist’s Trick ‘Explains’ JFK Backward Movement When Shot. Should we trust “experts” writing in “peer reviewed” journals who seek to promote interpretations of events preferred by the very establishment whose approval is necessary for their career advancement? 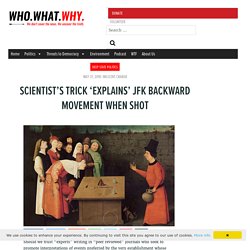 Is this about National Security — the usual reason given when it comes to hiding the truth in the Kennedy assassination — or is it about job security? Are we being cynical to wonder about these things? See if the following revelations make you wonder as well. In any case, if you like puzzles, you should find this report engaging. Untitled. — from Alternet Of all the fascinating and weird things about the JFK assassination story, the veil of official secrecy that still surrounds the subject a half-century later is one of the most fascinating and weird. 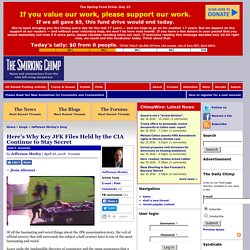 Leave aside the implausible theories of conspiracy and the smug assurances that a little man shot a big man, get over it. The extreme and strange secrecy around the government’s information about the JFK assassination continues—even as the CIA insists we already know the whole truth of who killed a popular liberal president a long, long time ago. On President Trump’s April 26 deadline for full disclosure of the JFK files, that veil of secrecy is still in place.

According to the Mary Ferrell Foundation’s analysis of the National Archives database, some 21,890 JFK files remain wholly or partially secret. Chapter 9, Oswald's Rifle Capability, "PRESUMED GUILTY", 1976. 9 Oswald's Rifle Capability The lunchroom encounter was Oswald's alibi; it proved that he could not have been at the sixth-floor window during the shots. 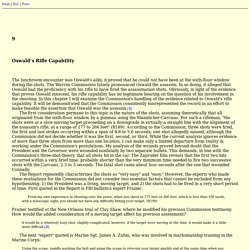 The Warren Commission falsely pronounced Oswald the assassin. In so doing, it alleged that Oswald had the proficiency with his rifle to have fired the assassination shots. Obviously, in light of the evidence that proves Oswald innocent, his rifle capability has no legitimate bearing on the question of his involvement in the shooting. In this chapter I will examine the Commission's handling of the evidence related to Oswald's rifle capability. When did the second floor lunchroom encounter first come to light? - JFK Assassination Debate. How could the FBI have found shirt fibers on the rifle ? - JFK Assassination Debate. 104 10305 10005. Why CIA’s Richard Helms Lied About Oswald: Part 2.

Richard Helms takes an oath at the his swearing in ceremony as Director of Intelligence. 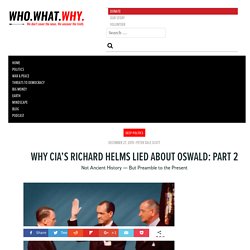 Photo credit: Adapted by WhoWhatWhy from (Jesse Wilinski / YouTube) This is a rumination on lies — layer upon layer of lies — told by US intelligence agencies and other officials about what Lee Harvey Oswald, or someone pretending to be him, was allegedly doing in Mexico City just weeks before the Kennedy assassination. The original goal, it seems, was to associate Oswald, in advance of the events of Dealey Plaza, with the USSR and Cuba. The essay focuses on tales told by Richard Helms, a top official of the CIA in 1963 who later became its director — and is based on a talk given by Peter Dale Scott. Richard Case Nagell. Richard Case Nagell was born in Greenwich, New York, on 5th August, 1930. Educated in Albany, Nagell, joined the United States Army at Albany in 1948. How to Avoid Being Linked to the JFK Assassination: Get Yourself Locked Up. On September 20, 1963, two months before President John F. Kennedy was gunned down in Dallas, a highly decorated Army veteran named Richard Case Nagell walked into a bank in El Paso, fired two shots into a wall from a revolver, and went outside to await arrest.

There was speculation, even by the officer who put him in handcuffs, that for some reason he wanted to be locked up. Nagell was charged with attempted bank robbery. Only later would he indicate to the FBI that he feared being implicated in an “inimical act” — one that involved accused JFK assassin Lee Harvey Oswald. Salon. Codebreakers and Killers: CIA Covert Ops and the JFK Assassination. To those not acquainted with the multifaceted narrative of President John F. Kennedy’s assassination, the idea that US intelligence was somehow involved sounds like wild speculation — an alternative reality deserving of the pejorative label “conspiracy theory.”

But to those more familiar with the facts surrounding the case, and knowledgeable about the formation and history of operations of the various intelligence agencies — particularly the CIA — this doesn’t seem so far-fetched after all. If you examine the history of the CIA, going from the late 1940s all the way up to 1963, the year of Kennedy’s death, you will discover an organization deeply involved in the business of overthrowing foreign governments that had fallen out of favor with US power elites. And part of that business sometimes involved assassinating foreign leaders that wouldn’t bend — although the actual dirty work could be contracted out to criminal elements. Our Comment Policy Related. Garrison's Evidence. In response to: Garrison's Case from the September 14, 1967 issue To the Editors: A critic of the Warren Report, it seems to me, is obliged to apply to Garrison’s evidence the same strict and objective tests which he applied to the Commission’s evidence.

Sylvia Meagher : Notes for a New Investigation. (First published in Esquire, December 1966, pp.211ff) Call the Important Witnesses Not Heard by the Commission Concerning Oswald’s Activities Pierce Allman, television newsman: Oswald had said that someone had approached him outside the Depository after the shooting and asked to be directed to the nearest phone. Oswald’s account corresponds with the actual experience of Pierce Allman, and this conflicts with the Commission’s reconstruction of Oswald’s “escape.” Mary Dowling, waitress at Dobbs House: She told the F.B.I. that Oswald and Tippit were in the restaurant at the same time, two days before the assassination, and that Tippit especially noticed Oswald when he complained about his food. Sylvia Meagher : The Curious Testimony of Mr Givens. (First published in The Texas Observer, 13 August 1971) Vincent Salandria interviewed by David Starks, 1995.

Anatomy of a CIA Assassination: The Chase. Who killed President John F. The CIA, Mafia, Mexico — and Oswald, Part 6. When John F. Kennedy was assassinated on November 22, 1963, the United States lost more than its president. Why CIA’s Richard Helms Lied About Oswald: Part 1. This is a rumination on lies — layer upon layer of lies — told by US intelligence agencies and other officials about what Lee Harvey Oswald, or someone pretending to be him, was allegedly doing in Mexico City just weeks before the Kennedy assassination.

Sylvia Meagher on Lee Harvey Oswald / interview by William O'Connell. Analysis and Opinion. Following is the first in a series of commentaries by distinguished authors, researchers, and historians associated with the AARC. We begin with AARC Board member, the esteemed Malcolm Blunt. 29 August, 2017 © 2017 – Malcolm Blunt. Real History Archives Kennedy Assassination Collection: How the Media Assassinated Oliver Stone's film JFK. Salon. About Us. Presidential Limo. The voice of the grassroots JFK research community! THE MURDER OF J.D. TIPPIT by S.r. Dusty Rohde. On November 22nd, 1963, President John F.

Kennedy was assassinated by what was once described as “a flurry of bullets” while riding in his Presidential motorcade in Dealey Plaza, Dallas, Texas. Larry Hancock. Someone Would Have Talked goes beyond proving a conspiracy to murder JFK. Plausible Denial, Mark Lane, E. Howard Hunt, and the Liberty Lobby Trial. Jury: CIA Involved in JFK Assassination. HUNT v. LIBERTY LOBBY. The drums of conspiracy and the fear of transparency. State Secret Conclusion. Tippit.html. JFK Assassination – "John Connally Hit at Z-frame 285" Assassination Records Review Board (ARRB) JFK Forum Index - JFK Assassination Debate. JIM GARRISON VS. JOHNNY CARSON (JANUARY 31, 1968) One - Listen to Pandora with No Ads, Higher Quality Audio, and More. Ian Griggs, No Case To Answer.

Finally hearing the TRUTH about the JFK cover-up. CIA Instructions to Media Assets. The Sibert and O'Neill Report : The JFK Assassination. The Shots in Dealey Plaza. Chapter 5. Coalition on Political Assassinations. Vince Salandria: The JFK Conspiracy Theorist. Warren Commission Hearings and Exhibits. O'Reilly's JFK Reporting Was Impossible. I Know Because I Was There.