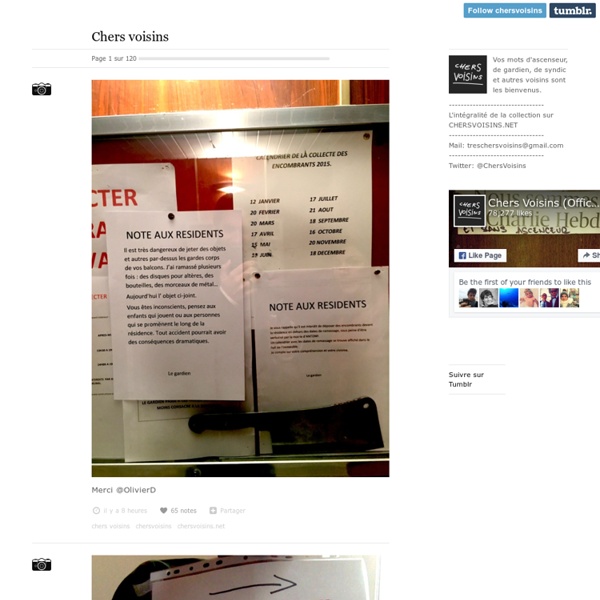 # ma vie Oct 26 Oct 20 Oct 19 Oct 18 Oct 17 Je suis une vraie fille Quand après m'avoir larguée comme une merde, il tente de prendre de mes nouvelles. When, after dumping me like shit, he wants to catch up for some news. (Source: whatshouldbetchescallme) Quand on me dit: “ C’est que tu dois les effrayer” When someone says: “Maybe you frighten them, no?” (Source: hollywoodassistants) The 5 Most Statistically Full of Shit National Stereotypes Stereotypes exist for a reason: They help us form opinions about people without all the hassle of getting to know them. Why waste time talking to, say, a Frenchman, when everybody knows they are a bunch of baguette-gobbling, beret-wearing cowards? Russians? Furious, bear-fighting drunkards.

Pouce Rouge Hitler Oct 15 Oct 14 ArtSheSaid brought to you by Ann Taylor and Flavorpill / branding and design by ALLDAYEVERYDAY #myfriendsaremarried UPDATE: Facebook has restored the ability to post links to and share MFAM posts!! You should now be able to post any links, share posts via the MFAM Facebook page, or share through the Facebook button on this site. Thank you, everyone for bombarding the internets yesterday! Russia in color, a century ago With images from southern and central Russia in the news lately due to extensive wildfires, I thought it would be interesting to look back in time with this extraordinary collection of color photographs taken between 1909 and 1912. In those years, photographer Sergei Mikhailovich Prokudin-Gorskii (1863-1944) undertook a photographic survey of the Russian Empire with the support of Tsar Nicholas II. He used a specialized camera to capture three black and white images in fairly quick succession, using red, green and blue filters, allowing them to later be recombined and projected with filtered lanterns to show near true color images.