Gender pay gap a persistent problem in Canada: Statscan data. It may be 2017 and Canada may have a self-proclaimed feminist as Prime Minister, but gender parity is not yet the norm in Canadian workplaces. 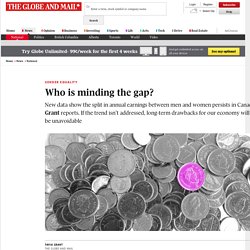 Recent annual data show that, in yearly earnings, women working full time in Canada still earned 74.2 cents for every dollar that full-time male workers made. Another measure that controls for the fact that men typically work more hours than women – the hourly wage rate – shows women earned 87.9 cents on the dollar as of last year. The updated numbers, compiled from Statistics Canada data, show the pay gap exists in every province and in every major occupational group, though there are variations.

The gap in annual earnings between men and women has barely budged over the past two decades, even as education levels among women have surpassed those of men. Canada’s gender pay disparity is larger than the Organization for Economic Co-operation and Development average. I need to have a baby to benefit from this federal budget: Mochama. 3 things women say that weaken the power of their words. If we're to believe the self-help aisle of every '90s bookstore, men and women talk and act so differently because we're really from two opposing planets. 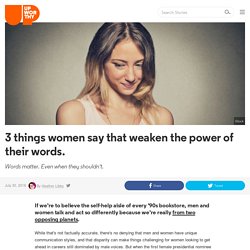 While that's not factually accurate, there's no denying that men and women have unique communication styles, and that disparity can make things challenging for women looking to get ahead in careers still dominated by male voices. But when the first female presidential nominee for a major political party addresses the nation to describe her vision for America — to be met by pundits dissecting her smile and her "shrill" tone instead of her proposed policies — it’s clear that words really matter. Not simply because we’re women, but especially because we’re women.

So, what makes language explicitly "female"? A crisis of confidence. The real reason that so many women have to spend so much time getting ready. iStock Before 8 a.m., I have often already applied seven products to my face -- face wash, tinted moisturizer, eyeliner, mascara and more. 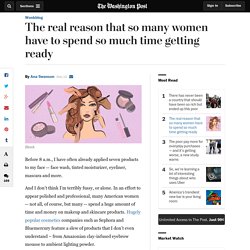 Most People Don't Know What They Should Be Making. We know there's a good chance we're not making as much as we should. 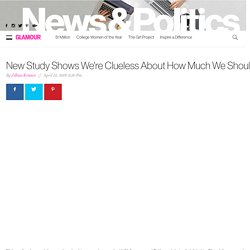 (Hello, wage gap.) But beyond closing that disturbing 21-cent discrepancy, how do we know what we should be making? In honor of Equal Pay Day, Glassdoor set to find out—and discovered most of us have no clue what our fair-market value is or should be. The Global Salary Transparency Survey, released today, shows that fewer than half of all employees around the world—64 percent, to be exact—work for companies that don't share pay data internally, with just 36 percent saying their companies do share internal salary information with employees. Even worse, American employees are the least likely to have a handle on what their cubicle mates or presentation partners take home, with just 31 percent saying their employer shares salaries. How I Landed My Dream Job Even Though I Wasn't an Overachiever. People who went to fancy schools throughout life do have an advantage, but that doesn't make my experience at public schools invaluable. 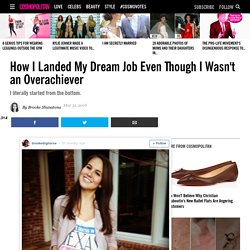 Mizzou, although public, is a great school. 3 Things Nurses REALLY want. Nurses don’t want a new cafeteria or the façade of the building remodeled. 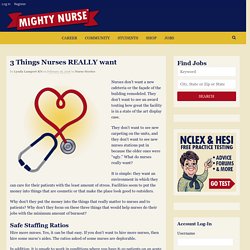 They don’t want to see an award touting how great the facility is in a state of the art display case. They don’t want to see new carpeting on the units, and they don’t want to see new nurses stations put in because the older ones were “ugly.” What do nurses really want? It is simple: they want an environment in which they can care for their patients with the least amount of stress. Male biology students consistently underestimate female peers, study finds. News releases | Research | Social science February 11, 2016 The survey data showed that in a hypothetical class made up equally of males and females with the same grades and level of outspokenness, males consistently named their male peers as being more knowledgeable, and female students showed a pattern of moving from female to male nominations over the course of the class.PLOS ONE Female college students are more likely to abandon studies in science, technology, engineering and math (STEM) disciplines than their male classmates, and new research from the University of Washington suggests that those male peers may play a key role in undermining their confidence. 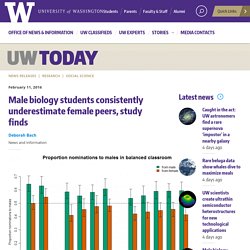 Published this week in the journal PLOS ONE, the study found that males enrolled in undergraduate biology classes consistently ranked their male classmates as more knowledgeable about course content, even over better-performing female students. Read the researchers’ study online in PLOS ONE. National Women In Engineering Day: 'My dad said architecture wasn't for girls. Boy I proved him wrong' Facebook's Sheryl Sandberg: 'I want women to be paid more' It took Sheryl Sandberg a long time – "too long" – to realise she was a feminist, and even longer to say it out loud. 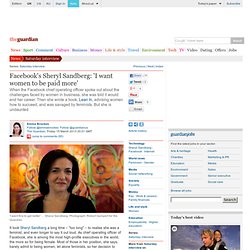 As chief operating officer of Facebook, she is among the most high-profile executives in the world, the more so for being female. Female academics pay a heavy baby penalty. Photo by Cristi M/iStockphoto/Thinkstock In 2000, I greeted the first entering graduate-student class at Berkeley where the women outnumbered the men. 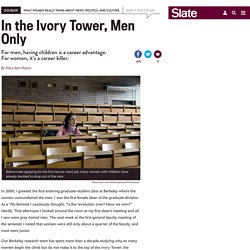 The Unspoken Stigma of Workplace Flexibility. “Do Women Have Too Many Rights?" Abby Johnson's Dangerous Message Delivered With Sugar. If Abby Johnson, former Texas Planned Parenthood Director-cum-pro-life maven, came to your event, she would respect your rights. 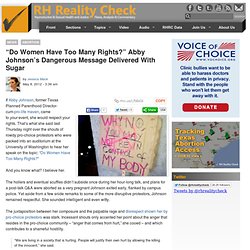 That’s what she said last Thursday night over the shouts of rowdy pro-choice protestors who were packed into an auditorium at the University of Washington to hear her speak on the topic: “Do Women Have Too Many Rights? “ Argentinian sex workers take to the walls. A series of Argentinian advertisements for sex workers’ rights has been making a small but well-deserved splash. Prostitution is legal in Argentina but brothels are not, and, without labor protections, sex workers are vulnerable to physical violence and economic exploitation. Commissioned by the Argentinian sex workers’ union, Asociación de Mujeres Meretrices de Argentina, the wheat paste ads cover the corners of buildings. Game Of Thrones' George RR Martin Is 'Feminist at Heart' Tips for Keeping your Tenement Tidy (in 1911) Miss Representation. Magazine - Why Women Still Can’t Have It All.

The culture of “time macho”—a relentless competition to work harder, stay later, pull more all-nighters, travel around the world and bill the extra hours that the international date line affords you—remains astonishingly prevalent among professionals today. Nothing captures the belief that more time equals more value better than the cult of billable hours afflicting large law firms across the country and providing exactly the wrong incentives for employees who hope to integrate work and family. Yet even in industries that don’t explicitly reward sheer quantity of hours spent on the job, the pressure to arrive early, stay late, and be available, always, for in-person meetings at 11 a.m. on Saturdays can be intense. Indeed, by some measures, the problem has gotten worse over time: a study by the Center for American Progress reports that nationwide, the share of all professionals—women and men—working more than 50 hours a week has increased since the late 1970s.

Revaluing Family Values. Science: It’s a sexist thing #sciencegirlthing. The best of non-profit advertising and marketing for social causes Posted by Tom Megginson | 26-06-2012 23:19 | Category: Women's Issues It was the marketing fail heard round the world, and I got a call this morning at my office asking me what the problem was. 'Science: It's a Girl Thing!' - Insipid Ad. Turns Out Being Born a Woman Is a Major Financial Mistake. I can't understand why so many Americans think their health care system is better than ours here in the UK, where the National Health Service is paid for out of general taxation.