4 Ways to Increasing Accountability (and Happiness!) at Work - Reality Based Leadership. People who are personally accountable have an internal motivation and desire to succeed, no matter what obstacles stand in their way. 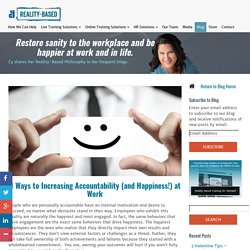 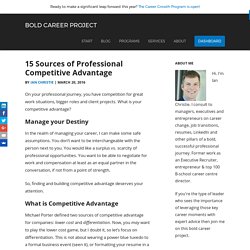 What is your competitive advantage? Manage your Destiny In the realm of managing your career, I can make some safe assumptions. You don’t want to be interchangeable with the person next to you. Brian Slobodow - Alumni Profile 2017 - detail - A.T. Kearney. Office: Chicago, 1995-2000; Cambridge, 2000-2003Title: PrincipalPractice: Operations If he didn’t have to work, Brian Slobodow of Golden Gate Capital is pleased to say he wouldn’t change a thing, including taking on the projects nobody else wanted. 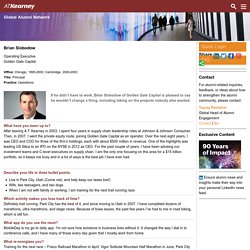 What have you been up to? After leaving A.T. Kearney in 2003, I spent four years in supply chain leadership roles at Johnson & Johnson Consumer. Then, in 2007, I went the private equity route, joining Golden Gate Capital as an operator. Describe your life in three bullet points. Live in Park City, Utah (Come visit, and help keep our taxes low!) Which activity makes you lose track of time? Definitely trail running. Why Your "Career Path" Probably Won't Lead You To Your Dream Job. By one estimate, there’s an almost 75% chance that your current job is unrelated to your college major. 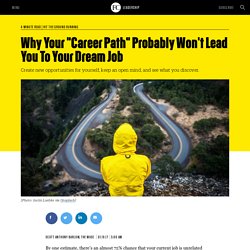 You spend four years sweating for that BSc in accounting, only to end up as a field sales rep for a pharmaceutical company. You break your back for your BA in modern European history, and now you're a fleet manager for a rental car company. Don’t Wait to Be Asked: Lead - A roadmap for increasing your influence at work. Ask people what they would change about their organizations, and you are likely to get an earful. 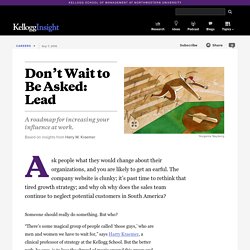 The company website is clunky; it’s past time to rethink that tired growth strategy; and why oh why does the sales team continue to neglect potential customers in South America? Someone should really do something. But who? “There’s some magical group of people called ‘those guys,’ who are men and women we have to wait for,” says Harry Kraemer, a clinical professor of strategy at the Kellogg School. But the better path, he says, is to lose the shroud of magic around this group and simply become part of it. He offers the following roadmap to future leaders looking to change their organizations right now. 1. “When I bring up this topic, very often younger people will say, ‘I really want to be a leader, but I’ve got this one slight problem: I don’t have anybody reporting to me.

But leadership doesn’t require direct reports, or a long tenure at an organization, says Kraemer. How to Criticize Your Boss (Without Offending Anyone) Being Multipassionate Doesn't Make You a Failure. It Makes You Indispensable - Here's Why. Untitled. 4 Factors That Advance Your Career (That Have Nothing To Do With You) How To Negotiate Your Salary. Five Signs Your Manager Is A Coward. 5-career-errors-new-graduates-make. I like listening to students evaluate their career options. 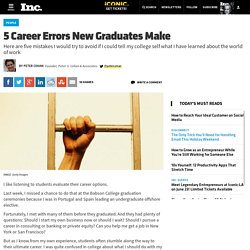 Last week, I missed a chance to do that at the Babson College graduation ceremonies because I was in Portugal and Spain leading an undergraduate offshore elective. Fortunately, I met with many of them before they graduated. And they had plenty of questions: Should I start my own business now or should I wait? Should I pursue a career in consulting or banking or private equity? Can you help me get a job in New York or San Francisco? But as I know from my own experience, students often stumble along the way to their ultimate career. By my junior year, I figured out that strategy consulting was the career for me. I had many ideas that turned out to be wrong. The brilliant people, the interesting projects, and the lifestyle of traveling the world appealed to me. I did attend business school and got a job in strategy consulting with a firm co-founded by HBS strategy guru, Michael Porter. Get Your Contacts In Order.

Networking means connecting with lots of people who can boost your career, and you’ll get farther with a solid tracking system. 17 October 2014 Getting ahead in your career often hinges on who you know as much as what you know. 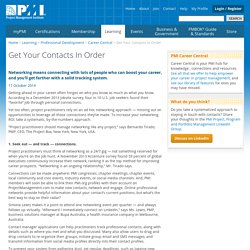 According to a December 2013 Jobvite survey, four in 10 U.S. job-seekers found their “favorite” job through personal connections. Yet too often, project practitioners rely on an ad hoc networking approach — missing out on opportunities to leverage all those connections they’ve made. To increase your networking ROI, take a systematic, by-the-numbers approach. How Super Successful People Learn to Say 'No' How-to-survive-criticism. When it became clear this spring that Alan Mulally, Ford's CEO, wasn't going to be selected for the top spot at Microsoft, the software company's stock took a hit. 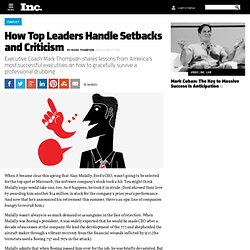 You might think Mulally's ego would take one, too. As it happens, he took it in stride. (Ford showed their love by awarding him another $14 million in stock for the company's prior year's performance. And now that he's announced his retirement this summer, there's an epic line of companies hungry to recruit him.) Mulally wasn't always in so much demand or as sanguine in the face of rejection.

Mulally admits that when Boeing passed him over for the job, he was briefly devastated. Legendary leaders like Mulally have three coping mechanisms that help them get through times when criticism, failure or disappointment threaten to rob the mojo that made them successful in the first place. Just let it go! Make Yourself Sponsor-Worthy - Sylvia Ann Hewlett. By Sylvia Ann Hewlett | 11:00 AM February 6, 2014 Gauge whether you’re ready for a sponsor by taking this brief assessment. 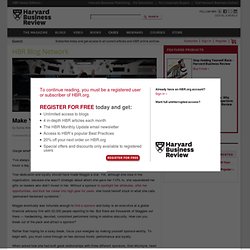 “I’ve always given 110%,” says Maggie. “Whoever I worked for, I gave them my all, every day, 10 hours a day, weekends and holidays, whatever it took. That endeared me to a lot of powerful men.” That dedication and loyalty should have made Maggie a star. Maggie eventually was fortunate enough to find a sponsor and today is an executive at a global financial advisory firm with 22,000 people reporting to her. Three Questions to Advance Your Career - John Beeson. By John Beeson | 12:00 PM February 4, 2014 In most organizations, professionals who want to move up get lots of feedback. 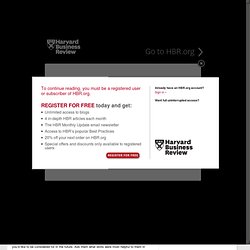 How to prepare for your next (inevitable) career change. This column is part of Globe Careers’ new Leadership Lab series, where executives and leadership experts share their views and advice about the leadership and management issues of today. There will be a new column every weekday. Find all Leadership Lab stories at tgam.ca/leadershiplab Over the past decade, we’ve all witnessed the end of the world of work as we know it.

How to Write the Dreaded Self-Appraisal - Amy Gallo. By Amy Gallo | 1:00 PM March 29, 2013 No one likes review time. For many, self-appraisals are a particularly annoying part of the process. What can you say about your own performance?