5 Essential Skills You Need To Keep Your Job In The Next 10 Years. Both Donald J. 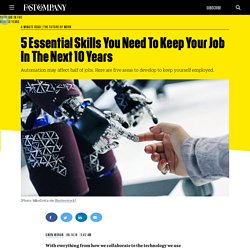 Trump and Hillary Clinton, their respective parties' presumptive nominees, have been called hypocrites repeatedly, loudly, and often by critics. You don't even need to adjudicate those attacks to understand why: We want leaders who allow us to hold consistent beliefs—which often (but certainly not always) means behaving consistently themselves. But there's another reason why we put a high value on integrity. Leaders play a crucial role in establishing their organizations' social structures, and successful organizations need to function like a neighborhood. Neighbors look out for each other and rally to work on projects, knowing that when they need help, other members of the community will step up to assist them. A leader's perceived personal integrity, in other words, is a cue for how everyone who follows to interact.

Positive Attitude: The One Thing That Determines Success. No one else “makes us angry.” 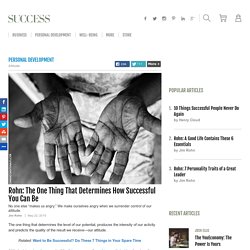 We make ourselves angry when we surrender control of our attitude. The one thing that determines the level of our potential, produces the intensity of our activity and predicts the quality of the result we receive—our attitude. Related: Want to Be Successful? Do These 7 Things in Your Spare Time. Only You Can Make Your Own Job Meaningful. No one could ever accuse Michael Scott, the hapless boss played by Steve Carell on the American version of The Office, of not trying hard enough. 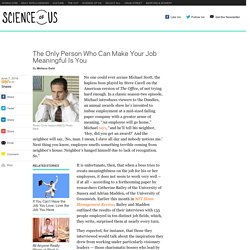 In a classic season-two episode, Michael introduces viewers to the Dundies, an annual awards show he’s invented to imbue employment at a mid-sized failing paper company with a greater sense of meaning. “An employee will go home,” Michael says, “and he’ll tell his neighbor, ‘Hey, did you get an award?’ And the neighbor will say, ‘No, man.

I mean, I slave all day and nobody notices me.’ Next thing you know, employee smells something terrible coming from neighbor’s house. Can ‘Deep Work’ Really Work for You? It’s a condition familiar to a broad swath of American workers. 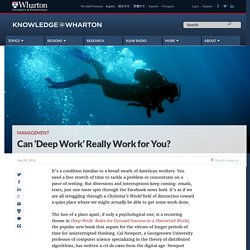 You need a free stretch of time to tackle a problem or concentrate on a piece of writing. But diversions and interruptions keep coming: emails, texts, just one more spin through the Facebook news feed. It’s as if we are all struggling through a Christina’s World field of distraction toward a quiet place where we might actually be able to get some work done. The lure of a place apart, if only a psychological one, is a recurring theme in Deep Work: Rules for Focused Success in a Distracted World, the popular new book that argues for the virtues of longer periods of time for uninterrupted thinking.

Cal Newport, a Georgetown University professor of computer science specializing in the theory of distributed algorithms, has written a cri de cœur from the digital age. What Makes Work Meaningful — Or Meaningless. References (32) 1. 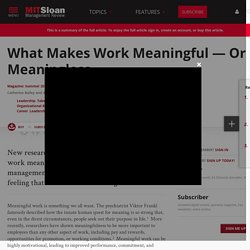 V.E. Frankl, “Man’s Search For Meaning” (Boston: Beacon Press, 1959). 2. 3 Questions That Are Way Better Than 'What's My Passion?' Three Habits For Showing Leadership Even When You Aren't An Expert. Most meetings—whether the formal kind, with everyone seated a conference table, or the quicker, standing variety—don't encourage the type of collaboration they could. 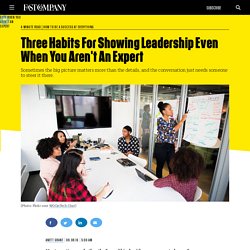 Rather than a free exchange of ideas, meetings usually find everybody retreating into their areas of expertise—their mental cubicles. That makes a kind of sense. Few of us are comfortable venturing a comment about something we don't know a whole lot about, especially in the company of those who may know more. But stepping outside of your comfort zone isn't just a way to display leadership. It's also how the types of ideas that businesses rely on circulate and catch on. After all, leadership itself isn't only (or even mostly) about utilizing your technical, functional skills. Here’s how you can break free from your mental cubicle and show leadership in every meeting, every day. 1. Those who show leadership without necessarily having deep expertise are good at taking the long view.

What Makes Work Meaningful — Or Meaningless. 6 Honest Mistakes That Can Get You Fired. There are so many things that can get good, hard-working people fired. 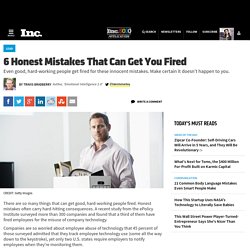 Honest mistakes often carry hard-hitting consequences. A recent study from the ePolicy Institute surveyed more than 300 companies and found that a third of them have fired employees for the misuse of company technology. Companies are so worried about employee abuse of technology that 45 percent of those surveyed admitted that they track employee technology use (some all the way down to the keystroke), yet only two U.S. states require employers to notify employees when they're monitoring them. When it comes to reasons for getting fired, digital faux pas steal the spotlight. Every week, it seems, we read about someone getting fired for something they posted on social media. "The real problem is not whether machines think but whether men do. " But digital media is far from the only way that people slip up and lose their jobs. Three Reasons Why You Aren't Reaching Your Full Potential.

"Inborn talent" is something of an oxymoron. 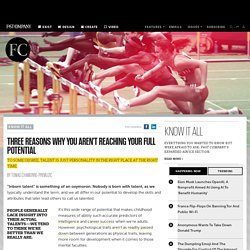 Nobody is born with talent, as we typically understand the term, and we all differ in our potential to develop the skills and attributes that later lead others to call us talented. It's this wide range of potential that makes childhood measures of ability such accurate predictors of intelligence and career success when we're adults. However, psychological traits aren't as readily passed down between generations as physical traits, leaving more room for development when it comes to those mental faculties.

The question, then, is why some people are better at developing their potential than others. Telltale Signs It's Time To Quit Your Job. Five Signs Your Manager Is A Coward. How to Explain a Career That Looks Stalled - John Lees. By John Lees | 11:00 AM July 11, 2014 People hold on to jobs too long for all kinds of reasons. 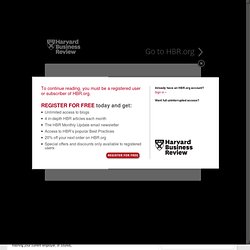 Sometimes it’s loyalty to co-workers at a company you’ve outgrown, or maybe you spent a long time thinking you were just about to get promoted… but never got the call. Or perhaps you simply had a lot going on in your personal life and your somewhat dull job felt steadying. During the downturn, many people decided to stay in whatever job they had, figuring that any job was better than no job. Whatever the reason, if you’ve stayed in a role long after your growth and learning in that role plateaued you need a plan for presenting your experience to recruiters and hiring managers.

How can you show you’ve grown? There are ways of making even timid choices sound less passive or defeatist. Dig deeper for good narratives showing skill development – just because evidence is hard to find doesn’t mean it’s hidden beyond reach. Above all else, if your career has been on hold, don’t blame the economy. How to Mentor. 21 Questions to Ask Yourself When All You Seem to Do is Fail. 1. 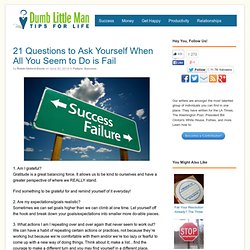 Am I grateful? Gratitude is a great balancing force. It allows us to be kind to ourselves and have a greater perspective of where we REALLY stand. Find something to be grateful for and remind yourself of it everyday! 2. 3. 4. What It's Like To Fail at McKinsey.