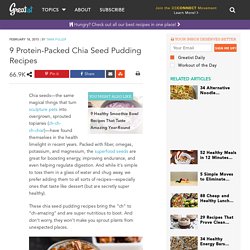 —have found themselves in the health limelight in recent years. Packed with fiber, omegas, potassium, and magnesium, the superfood seeds are great for boosting energy, improving endurance, and even helping regulate digestion. And while it’s simple to toss them in a glass of water and chug away, we prefer adding them to all sorts of recipes—especially ones that taste like dessert (but are secretly super healthy). These chia seed pudding recipes bring the “ch” to “ch-amazing” and are super nutritious to boot. Photo: I Heart Eating 1. Think 50 Shades of Grey is seductive?

2. You say parfait, we say par-tay (in your mouth). 3. Why save dark chocolate and raspberries for Valentine’s Day when you can eat them every day? Photo: Natural Chow 4. We love when simple recipes result in big flavor. 10 Delicious Chia Seed Pudding Recipes. Despite their minuscule appearance, chia seeds are a nutritional powerhouse: They’re packed with omega-3 fatty acids, antioxidants, calcium, fiber and protein. 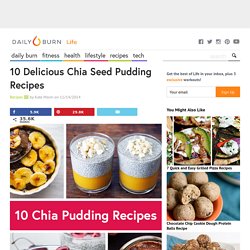 Plus, these small ingredients are simple to make into a pudding because they absorb up to 10 times their weight in water! Not only does this make chis seeds a great starting point for breakfast, a healthy snack, or textured dessert, but it also means that they will help you stay hydrated. Try making one or all of these chia seed pudding recipes — and don’t be afraid to put your own spin on them, too. 10 Must-Try Chia Seed Pudding Recipes 1. The Chippy Doon The Lane, Buchanan Street, City Centre, Glasgow - Zomato UK. Stoemp. Stoemp is the richer Brussels variant of the stamppot dish in the cuisine of Belgium and the Netherlands. 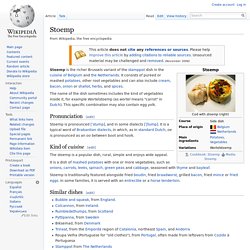 It consists of pureed or mashed potatoes, other root vegetables and can also include cream, bacon, onion or shallot, herbs, and spices. The name of the dish sometimes includes the kind of vegetables inside it, for example Wortelstoemp (as wortel means "carrot" in Dutch). This specific combination may also contain egg yolk. Pyttipanna. A plate of vegetarian pyttipanna with vegetables, beet, and a fried egg. 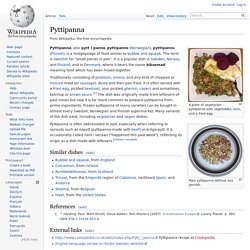 Plain pyttipanna without any garnish. Pyttipanna, also pytt i panna, pyttipanne (Norwegian), pyttipannu (Finnish), is a hodgepodge of food similar to bubble and squeak. The term is Swedish for "small pieces in pan". It is a popular dish in Sweden, Norway and Finland, and in Denmark, where it bears the name biksemad, meaning food which has been mixed together. Traditionally consisting of potatoes, onions, and any kind of chopped or minced meat (or sausage), diced and then pan fried, it is often served with a fried egg, pickled beetroot, sour pickled gherkin, capers and sometimes ketchup or brown sauce.[1] The dish was originally made from leftovers of past meals but now it is far more common to prepare pyttipanna from prime ingredients. 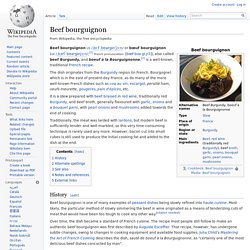 It is a stew prepared with beef braised in red wine, traditionally red Burgundy, and beef broth, generally flavoured with garlic, onions and a bouquet garni, with pearl onions and mushrooms added towards the end of cooking. Traditionally, the meat was larded with lardons, but modern beef is sufficiently tender and well-marbled, so this very time-consuming technique is rarely used any more. However, bacon cut into small cubes is still used to produce the initial cooking fat and added to the dish at the end. History[edit] Beef bourguignon is one of many examples of peasant dishes being slowly refined into haute cuisine. Over time, the dish became a standard of French cuisine. How to make Potato Croquette コロッケ. Moo Goo Gai Pan. Rating: 41 30 minutes 15 minutes 45 minutes Per Serving 421 calories Fat 34 g Carbs 6 g Protein 22 g Ingredients. 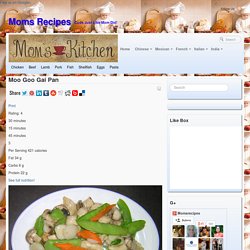 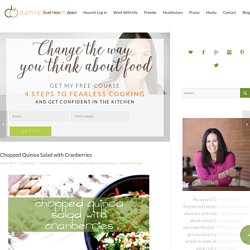 Once I start making them I just can’t stop. This one is so tasty. I followed my simple formula for quinoa salad making and it worked like a charm. Here's What Real Healthy People Actually Eat For Lunch. Breakfast Hacks You Can Make In 5 Minutes. Best Food From Around the World. If you’re eating at chain restaurants when you’re traveling, you’re not really traveling. 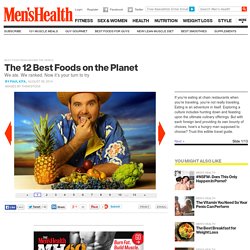 Eating is an adventure in itself. Exploring a culture includes hunting down and feasting upon the ultimate culinary offerings. But with each foreign land providing its own bounty of choices, how’s a hungry man supposed to choose? Trust this edible travel guide. Next » 1. Ireland American diners love to boast about the size of their breakfast platters, but those flapjack-laden plates can’t stack up to how the Irish start their day. 2.

Hawaii Few foods in the world taste as fresh as this island delicacy. 3. Spain Walk into most Spanish tapas bars and you’ll find legs of cured pork dangling from the ceilings. 4. Sicily The Piazza Carlo Alberto market in Catania is madness. 5. India Indian cuisine is so much more than chicken tikka masala. 6. Philadelphia. 12 Best Foods on the Planet. Cobb Salad Ham Roll-ups - Pork Be Inspired. 21 Signs You re Old Before Your Time. Avocado Smash Prosciutto and Poached Eggs on Toast stevescooking YouTube. Grilled Brats With Braised Cabbage and Apples stevescooking YouTube. Dinner Recipe: Classic Salad Niçoise — Recipes from The Kitchn. Sometimes in the rush of life, there is nothing better than an old standby to help nourish your soul. 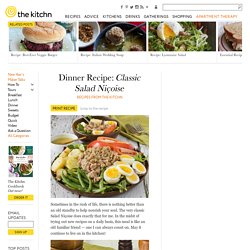 The very classic Salad Niçoise does exactly that for me. In the midst of trying out new recipes on a daily basis, this meal is like an old familiar friend — one I can always count on. May it continue to live on in the kitchen! As a recipe developer, I maintain a fairly abnormal eating schedule. Rarely do I enjoy the "standard" three square meals plus a snack. Salade Nicoise. Enlarge Credit: Todd Coleman SERVES 4–6 FOR THE DRESSING:1 clove garlicKosher salt, to taste⅓ cup olive oil2 tbsp. fresh lemon juice1 tbsp. 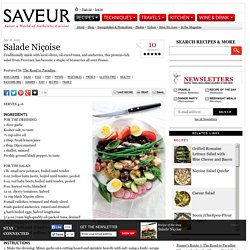 Make the dressing: Mince garlic on a cutting board and sprinkle heavily with salt; using a knife, scrape garlic and salt together to form a smooth paste. Bouillabaisse - Steamy Kitchen Recipes. A couple of weeks ago, I hosted my buddy Hank Shaw of the award-winning Hunter Gardener Angler Cook at our home and hit 2 out of the 4 activities from his blog name: fishing and cooking. If you must know why those 2 specific activities, our garden is winding down for its summer rest and hunting involves either a gun, spear, snare or crossbow – none of which I know how to use.

Hank is traveling the U.S. as part of his book tour for Hunt, Gather, Cook: Finding the Forgotten Feast, where he will be visiting each of the 50 States to experience each native species. For us here in Florida, we were out to snag a grouper. You can read about our experience on my blog post. Soba Noodle Salad with Chili Lime Shrimp. Okay let’s talk about healthy things PLEASE. I hope everyone had a great Halloween weekend.

Ka-La and I had a wonderful time and despite our costume attempt at being healthy I’m afraid I am still recovering from a major sugar coma… I don’t really do hangovers…but I sure as heck do sugar comas. I have an insane sweet tooth so you better believe that if I’m surrounded by candy for an entire weekend I’m going to eat it. Grilled Brats With Braised Cabbage and Apples (stevescooking) Avocado Smash, Prosciutto and Poached Eggs on Toast (stevescooking) How to make Egg drop soup かんたん卵スープの作り方. How to make Potato Croquette コロッケ.