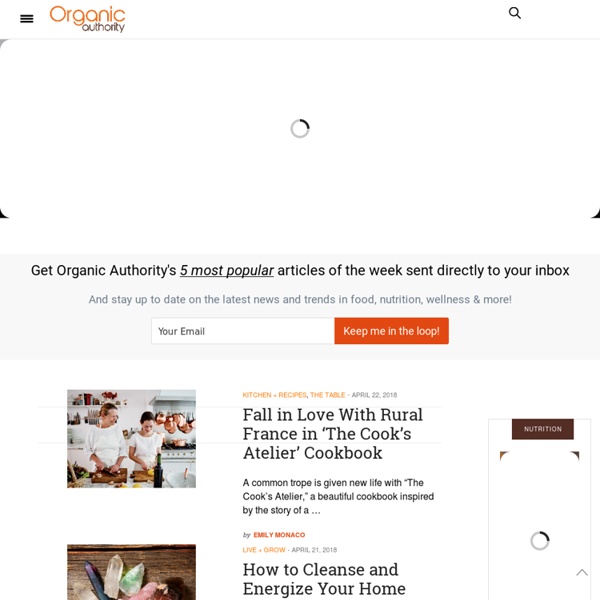 Meet The 11-Time World Pizza Champion Photo: Sara Remington You'd be hard pressed to find someone more enthusiastic than Tony Gemignani is about pizza. Tony Gemignani has one jealousy-inducing resume. Is Eating Organic Really Better for You and the Environment? On average, organic food items are 47 percent more expensive than standard supermarket fare—but thanks to their purported health and environmental benefits, many shoppers still splurge on them. In fact, the total retail market for organic products in the United States was valued at over $39 billion in 2016. But while the organic industry means big business for farmers and food companies, the question still remains: Are organic foods actually better for both you and the environment? In the video below, AsapSCIENCE co-creator and host Mitchell Moffit explains why eating organic may not be the panacea most people think it is. Contrary to popular belief, an organic diet isn't chemical-free. In fact, Moffit explains, organic farmers can still use natural pesticides and fungicides to keep crop-destroying insects at bay—and studies show that they aren’t necessarily better for you or the soil than synthetic ones.

What's the Difference Between Dutch Process and Natural Cocoa Powder? [Photographs: Marissa Sertich Velie, unless otherwise noted] There's a kitchen stereotype that bakers are meticulous and measure everything to the gram. They follow directions to the letter, all while savory cooks are throwing food into pots Swedish Chef style. Sometimes I wish I baked like that, but truth be told I often freestyle and substitute. The Serious Eats Field Guide to Asian Greens [Photographs: Ben Jay, unless otherwise noted] When you walk into the produce section of your local Asian supermarket, you'll probably be greeted by a dazzling but daunting display of unusual greens. They're all great, and easy to cook, but it helps to be armed with some knowledge to tell your shoots from your choys. That's why we highlighted the most common varieties you'll find in Asian groceries with notes on what they are, how they taste, and most importantly, what to do with your haul. AA Choy AA Choy stalks and leaves.

19 Years of Feeding Animals GMO Shows No Harm Often GMO critics will argue that the biotech industry is conducting a massive experiment with our food supply by introducing genetically modified organisms. The implication is that GMOs are not adequately studied, which is at best debatable, but in a way they are correct. We can look at what has happened in the 19 years of GMO use starting in 1996 to see if there have been any adverse effects. A newly published study, Prevalence and impacts of genetically engineered feedstuffs on livestock populations, does just that. Decoding the Secret Language of Food Expiration Dates Americans tend to harbor dark suspicions about that forgotten can of beans in the back of the pantry, far past its sell-by date. If you’re like most consumers, you probably just toss expired items on the better-safe-than-sorry principle (unless, perhaps, it’s a Twinkie). But there’s a good chance many aged food remains totally safe to eat, according to a new report (PDF) that blames the flawed food-dating system for tons of perfectly edible food getting wasted each year.

The Difference Between Organic and Sustainable Food Updated September 04, 2018 Sustainable and organic do not mean the same thing. Beyond the limited scope of the U.S. Department of Agriculture's National Organic Program (NOP), there are no strict rules set up to ensure that organic farmers or organic food production operations follow eco-minded practices. For members of the organic industry, it's important to be realistic about the limits of organic certification.﻿ How to Make Bone Broth (and Why Is it So Healthy?) With cold and flu season upon us, you might want to learn how to make bone broth so you can stock up on this superliquid. For those, not in the know, bone broth is stock on steroids (not literally, of course). Back before meat and vegetables came already cut up and wrapped in styrofoam and plastic, our grandparents used to make mineral rich bone broth from bones, scraps and other leftover bits. Nothing was allowed to go to waste. Unfortunately, we lost the knowledge to make this nourishing food. What Is Bone Broth?

Which Pesticides Can Be Used in Organic Farming? Just because agricultural practices are organic does not mean they are 100 percent free of pesticides. Although the National Organic Program has created rules to help keep organic products free from extremely harmful pesticides, such as synthetics or organochlorine pesticides, some pesticides are allowed for use when producing or handling certified organic products. Exceptions Slow Cooker Bone Broth Recipe Asian In Asian culture, soups and broths are part of everyday meals. A traditional Japanese breakfast would include a bowl of Miso Soup to warm the body. Chinese restaurants feature a long list of house soups, from an appetite stimulating Hot and Sour Soup to even a light broth served after dinner to cleanse the palate and complete the meal. Growing up, Mom always had soup simmering on the stove.

Top Myths About Organic Food Pesticides are bad. Very bad. Beyond the fact that pesticides are poisons designed to kill, many of them (organochlorine pesticides in particular) are absorbed by the human body in such a way that even long after you ingest them, they remain in your body, building up as the years go by. In fact, consider this: DDT is an organochlorine pesticide that everyone thought was safe, but as it turns out, DDT was seriously dangerous and was banned in 1972. With this in mind, you'd think DDT would have vanished. However, the effects of DDT were so strong that it's still showing up in the bodies of people today, including in people born after DDT was banned.

Make Fresh Ricotta Gnocchi in Less Time Than it Takes to Cook Dried Pasta Tender, light, flavor-packed gnocchi from scratch in under 10 minutes. [Photographs: J. Kenji Lopez-Alt] More Pasta Essential techniques, recipes, and more! Organic Pesticides Have you seen the pro-organic propaganda video with the happy family who switches to organic only food and the pesticides disappear from their urine? It has over 5 million hits as of this writing. This is a core fearmongering strategy of the organic lobby. Of course, there is no discussion about the absolute level of the pesticides, and the fact that such levels are insignificant and pose no known risk. But there is a deeper deception in this video and many studies looking at the difference in pesticide exposure between conventional and organic produce.