Our 25 Best Holiday Cookies for Your Dessert Table. Holiday cookie finder: Over 75 winning recipes. 52 Heavenly Church Potluck Recipes. Visit Salzburg - Austrian Desserts & Sweet Dishes. The famous Salzburg Nockerl as they should be served: Golden with a bit of sugar. 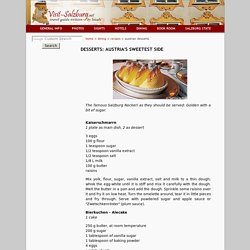 Kaiserschmarrn1 plate as main dish, 2 as dessert 3 eggs 100 g flour 1 teaspoon sugar 1/2 teaspoon vanilla extract 1/2 teaspoon salt 1/8 L milk 100 g butter raisins Mix yolk, flour, sugar, vanilla extract, salt and milk to a thin dough; whisk the egg-white until it is stiff and mix it carefully with the dough. Melt the butter in a pan and add the dough. Sprinkle some raisins over it and fry it on low heat. Bierkuchen - Alecake1 cake 250 g butter, at room temperature 200 g sugar 1 tablespoon of vanilla sugar 1 tablespoon of baking powder 4 eggs a pitch of salt 500 g flour 250 g raisins grated lemon peel 125 mL pale beer crystallised cherries Mix butter, sugar, vanilla sugar, eggs and salt until creamy. Chocolate peanut butter tart – smitten kitchen. Definitely one of the best things about having a 6.5 year old is that he now has classmates that can bestow upon us The Annual Gift of the Thin Mint Cookies. 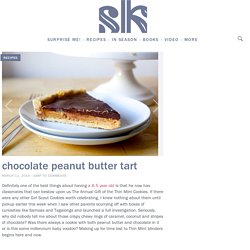 If there were any other Girl Scout Cookies worth celebrating, I knew nothing about them until pickup earlier this week when I saw other parents scurrying off with boxes of curiosities like Samoas and Tagalongs and launched a full investigation. Seriously, why did nobody tell me about those crispy chewy rings of caramel, coconut and stripes of chocolate? Shrimp Tortellini Pasta Toss Recipe. Yorkshire Pudding Recipe. Print Photography Credit: Elise Bauer The texture of a Yorkshire pudding is nothing like a pudding in the modern sense of the word. 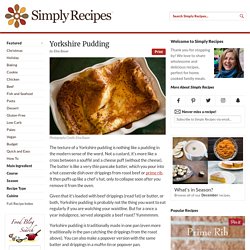 Prime Rib Recipe. 1 Remove the beef roast from the refrigerator 3 hours before you start to cook it. 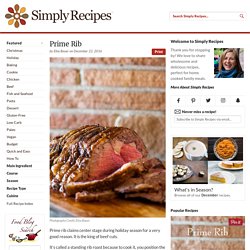 Sprinkle it with salt all over and let it sit, loosely wrapped in the butcher paper. Roasts should be brought close to room temperature before they go into the oven, to ensure more even cooking. 2 If your butcher hasn't already done so, cut the bones away from the roast and tie them back on to the roast with kitchen string. This will make it much easier to carve the roast, while still allowing you to stand the roast on the rib bones while cooking. 3 Preheat your oven to 500°F (or the highest temp your oven reaches less than 500°F). 4 Place the roast fat side up and rib bones down in a roasting pan. 5 After browning the roast at a 500°F temperature in the oven for 15 minutes, reduce the oven temperature to 325°F.

How to make slow cooker creamy mushroom chicken with rice. This is a comforting meal in one pot! 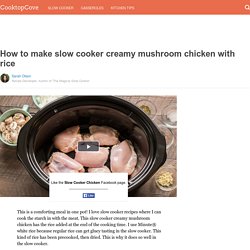 I love slow cooker recipes where I can cook the starch in with the meat. This slow cooker creamy mushroom chicken has the rice added at the end of the cooking time. Oatmeal Toasting Bread Recipe & a Baking Invitation. Mandarin Orange Chicken Recipe. Amanda Cohen’s Secret-Weapon Stir-Fry Sauce Recipe. Brownies With Caramel: Sweet and Salty in a Committed Relationship. “Ultimately, there’s nothing you can make with chocolate that’s better than a brownie,” said Renato Poliafito, owner of two Baked bakeries in New York City with his partner and co-founder, Matt Lewis. 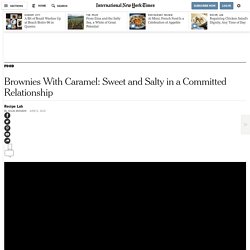 “You can make things that are fancier, or lighter, or creamier, but they won’t be better.” If such a title is possible, Mr. Lewis and Mr. Bowled over: Our favorite tasty bowls in the Twin Cities. At breakfast, lunch and dinner, in restaurants across the Twin Cities area, chefs have taken their focus off the plate and are concentrating on what's in the bowl. 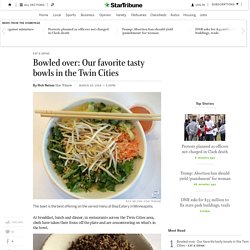 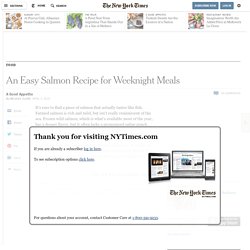 Farmed salmon is rich and mild, but isn’t really reminiscent of the sea. Frozen wild salmon, which is what’s available most of the year, has a deeper flavor, but it often lacks a pronounced saline punch. Orange Party Cake from Mike's Table. Like I’ve said before, my wife and I are cake people. 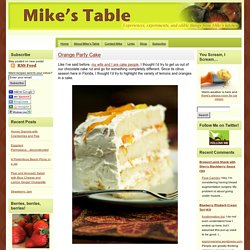 I thought I’d try to get us out of our chocolate cake rut and go for something completely different. Since its citrus season here in Florida, I thought I’d try to highlight the variety of lemons and oranges in a cake. So before I go into how it tastes, I should let you know what’s actually in the cake. The cake itself is flavored with both lemon and orange, and wedged between all four layers is a sheet of orange marmalade, orange flavored buttercream, and bits of candied citrus (I candied a variety of fruit–more on this later). Broccoli Cheddar Bites Recipe. Do you like broccoli? 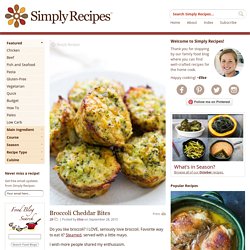