Science and history of cooking

A History of Royal Food and Feasting. Explore the history and making of butter : Butter. The History Dish: The Photographer’s Cheesecake « Four Pounds Flour. A cheesecake recipe for a 19th century Photographer. 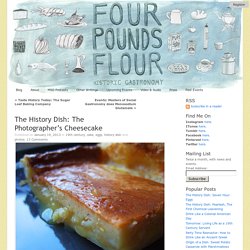 The History College was one of the most difficult and demanding times of my life. I looked for small ways to escape the pressure, like ducking into Attenson’s Antiques on Coventry, a maze of rooms stuffed with treasures. In the back corner was a bookshelf used as a dumping ground for an ever-growing collection of photographs. Box after box, picked up at estate sales, ended up in this nook. If you’ve ever spent time sorting through thrift store images, you’ve certainly come across a type of photography known as albumen printing. Albumen is made of egg whites. The process was revolutionary and used for much of the second half of the 19th century, and even into the 20th. The Recipe In 1861, The British Journal of Photography suggested, to the amateur photographer, that he could use his excess egg yolks to make a cheese cake.

Beat (using an electric mixer, if you like) butter and sugar until light and fluffy. ‪Learn To Cook: Making an Emulsion (for Salad Dressing, Mayonnaise, or Sauces)‬‏ A Science Moment with Harold McGee: What is Alkalinity? Bakistry: The Science of Sweets. Science: Substituting Dried Herbs for Fresh. Science: How to Slice Steak and Make Cheap Cuts Tender (with Your Knife) 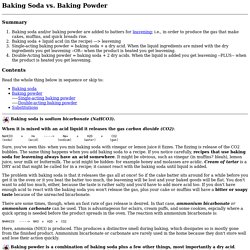 When it is mixed with an acid liquid it releases the gas carbon dioxide (CO2): NaHCO3 + H+ -----> Na+ + H20 + CO2 (soda) (acid) (sodium) (water) (gas) Sure, you've seen this- when you mix baking soda with vinegar or lemon juice it fizzes. Science of Bread: Bread Science 101. From Chinese baozi to Armenian lavash, bread comes in thousands of forms. What do they have in common? On the most basic level, they all involve cooking a mixture of milled grains and water. Imagine a continuum of breads, ranging from the thinnest flatbreads to the fluffiest brioche. Some are amazingly simple: Matzoh, for example, is nothing more than flour and water, baked until crisp. Raised breads, on the other hand, involve the complex interactions between flour and the leaveners that give them their porous, tender quality.

Leaveners come in two main forms: baking powder or soda and yeast. Baking powder or baking soda work quickly, relying on chemical reactions between acidic and alkaline compounds to produce the carbon dioxide necessary to inflate dough or batter (more on this later). Yeast, on the other hand, is a live, single-celled fungus. But leavening agents would just be bubbling brews without something to contain them. For more about bread science, check out these links!