Bacon Chicken Roulade Recipe. This post is sponsored by Tabasco® and is the fifth of five dishes in the Tabasco 10 Ingredient Challenge. 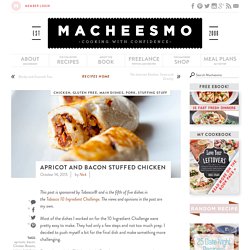 The views and opinions in the post are my own. Most of the dishes I worked on for the 10 Ingredient Challenge were pretty easy to make. They had only a few steps and not too much prep. I decided to push myself a bit for the final dish and make something more challenging. Enter the roulade. The filling turned out really nice, the chicken didn’t unroll on me, and the dish wasn’t overcooked at all. Directions 1) Add bacon to a large skillet over medium-low heat. 2) Add onions, tomato, and dried apricots. 3) Preheat oven to 350 degrees F. 4) Divide filling between four pounded chicken breasts. 5) Add oil to a large skillet over medium high heat. 6) Once all the chicken roulades are seared, transfer chicken to baking dish and bake at 350 F. until they reach 160 degrees F. in the thickest parts. 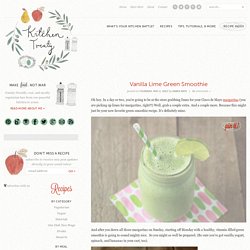 In a day or two, you’re going to be at the store grabbing limes for your Cinco de Mayo margaritas (you are picking up limes for margaritas, right?!) Well, grab a couple extra. And a couple more. Because this might just be your new favorite green smoothie recipe. And after you down all those margaritas on Sunday, starting off Monday with a healthy, vitamin-filled green smoothie is going to sound mighty nice. Ginger and Spinach Green Smoothie. I know, I know. 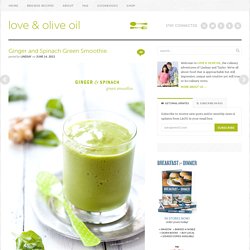 Here I am, posting a green smoothie. Me, the girl that berated juice cleanses and liquid diets in lieu of hot fudge sauce. But, you know what, sometimes after a week of decadence and doughnuts and tacos and fried everything, we were craving something fresh for lunch instead of our usual melted cheese something or other. We actually used to do smoothies for lunch quite often, though not so often as of late. While they are typically of the blue and pink persuasions, however, we have learned a few lessons in green smoothies over the years. 20 Super-Healthy Smoothie Recipes. 20 Super-Healthy Smoothie Recipes. My Happy Place: peach crisp smoothie. So I'm halfway through my second week back to school and I'm already missing sleeping in, eating pancakes for breakfast on a Wednesday, laying in bed browsing Pinterest foreversssss, and eating cake for lunch. 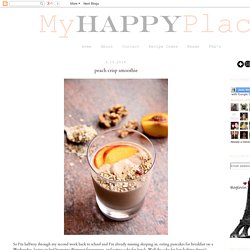 Well the cake for lunch thing doesn't depend on if I'm on break or not, but you know. Soft Boiled Eggs. 2012 ended up being the year of the egg for me in the kitchen. 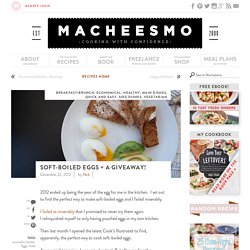 I set out to find the perfect way to make soft-boiled eggs and I failed miserably. I failed so miserably that I promised to never try them again. I relinquished myself to only having poached eggs in my own kitchen. Then last month I opened the latest Cook’s Illustrated to find, apparently, the perfect way to cook soft-boiled eggs. As you might imagine, I was very skeptical. I did so and I almost cried when my eggs came out. As a bonus, I’m partnering with the people over at Cook’s Illustrated to do a cool giveaway at the end of this post! Directions 1) Bring about 1/2 inch of water to a boil over medium high heat in a pot big enough to hold your eggs in one layer. 2) When water is boiling, add eggs straight from the fridge. 3) Cover pot and let cook for 6 1/2 minutes exactly. 4) Uncover pot and run cold water over eggs for 30 seconds. 5) Peel eggs starting with the larger end of the egg and slowly working up the egg.

Greens and Ham Breakfast Bowl. It’s no secret that I’ve become a huge fan of the soft-boiled egg. 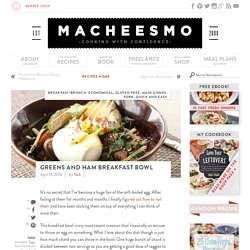 After failing at them for months and months I finally figured out how to nail them and have been sticking them on top of everything I can think of since then. This breakfast bowl is my most recent creation that’s basically an excuse to throw an egg on something. What I love about this dish though is just how much chard you can shove in the bowl. One huge bunch of chard is divided between two servings so you are getting a good dose of veggies to start the day.

I could have this for breakfast or lunch and be full for the entire day. Directions 1) Dice ham and rinse and dice chard. 2) Add ham to a large skillet over medium heat with a small drizzle of olive oil. 3) Season veggies with salt and pepper and divide between two large bowls. 4) Top with avocado slices, an egg (poached, soft-boiled or over-easy), and a dash of hot sauce. Simple Ingredients There is really only a few ingredients in this bowl. Three ingredient bowls!