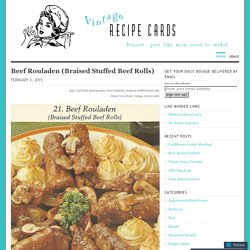 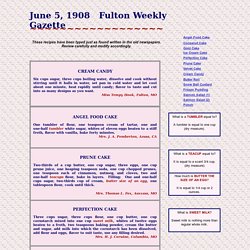 Miss Tempy Hook, Fulton, MO Make a plain egg and milk custard, three pints, add a cup of partially chopped blanched almonds and pour into the freezer; when just beginning to freeze, add two cups whipped cream, stir often while freezing so that the fruit will be well distributed. Mrs. Opal Muir, Fulton, MO Three cups sugar, three cups flour, one cup butter, one cup cornstarch mixed into one cup sweet milk, whites of twelve eggs beaten to a froth, two teaspoons baking powder, cream the butter and sugar, add milk into which the cornstarch has been dissolved, add flour and eggs, flavor to suit taste, use any filling desired. Mrs. Mrs. Mrs. Mrs. Historic cookbooks 1900 - 1910. Duke University's Advertising books online have changed their URLs, so until I get time to change them all, when you are redirected to their main page, type in the author or title. 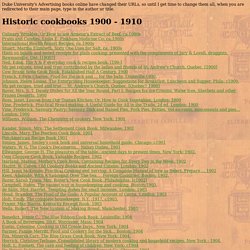 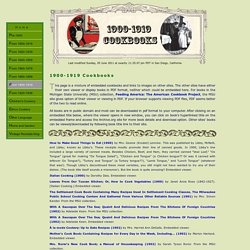 The other sites have either their own viewer or display books in PDF format, neither which could be embedded here. The Baking Circle Community. Old Cook Books (late 1800's & early 1900's), links to free e-copies & PDF copies Here are links to complete e-copies of old cookbooks that can be read online and downloaded for free in PDF format, at Archive.org and Google e-books. 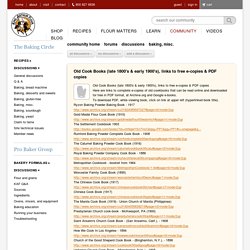 Vintage Cookbooks Resource. Don Bell with Scrapbooks and Vintage Cookbooks My collection of vintage cookbooks published from the late 1800s to the mid 1900s and now in the public domain was a source for many old fashioned dessert recipes published on this site. 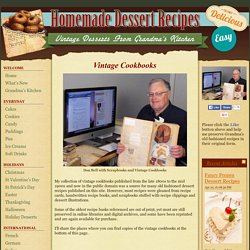 However, most recipes were gleaned from recipe cards, handwritten recipe books, and scrapbooks stuffed with recipe clippings and dessert illustrations. Some of the oldest recipe books referenced are out of print, yet most are still preserved in online libraries and digital archives, and some have been reprinted and are again available for purchase. I'll share the places where you can find copies of the vintage cookbooks at the bottom of this page. 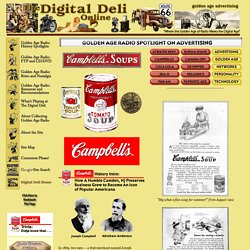 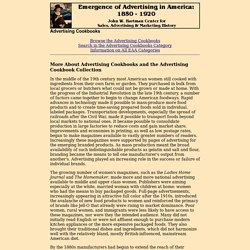 They purchased in bulk from local grocers or butchers what could not be grown or made at home. With the progress of the Industrial Revolution in the late 19th century, a number of factors came together to begin to change American foodways. The growing number of women's magazines, such as the Ladies Home Journal and The Homemaker, made more and more national advertising available to middle and upper class women. By the 1880s manufacturers had begun to extend the reach of their advertising message by the device of offering little booklets filled with recipes by mail, either for free or at a very modest cost. Historic Cookbooks on line. Over 1,000 free historic cookbooks and manuals found online as e-texts are grouped by date and author. 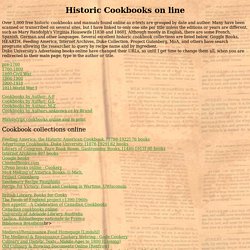 Many have been scanned or transcribed on several sites, but I have linked to only one site per title unless the editions or years are different, such as Mary Randolph's Virginia Housewife [1838 and 1860]. Although mostly in English, there are some French, Spanish, German and other languages. Several excellent historic cookbook collections are listed below. BookFeeding America. Browse the Collection The titles below are organized alphabetically. 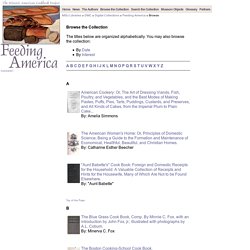 You may also browse the collection: Vintage Cookbooks. Recipes Past and Present- Wartime Recipes II. These recipes are taken from the Ministry of Food leaflets issued in the United Kingdom during the Second World War. 9th Nov, 1939 Issued by the Ministry of Food The following listing is for one adult (children receive half) per week Bacon and ham (3-4 slices/rashers) 4 ozOther meats – 2 small chopsButter 2 ozCheese 2 ozMargarine 4 ozCooking fat 4 ozMilk 3 pintsPlus 1 packet dried milk per monthSugar 8 ozPreserves every two months 1 lbTea 2 ozEgg (shell egg) 1Plus 1 packet dried egg per monthSweets 12 oz.

At these cooking schools, auditoriums full of women (unless it was a “white elephant” day, when women could bring the men in their lives) would see scripted cooking and cleaning demonstrations and take part in raffles. Vintage Recipes: Cookbooks. Maria Parloa (Parloa, Maria, 1843-1909) Online Books by (Parloa, Maria, 1843-1909) A Wikipedia article about this author is available. Help with reading books -- Report a bad link -- Suggest a new listing Additional books from the extended shelves: See also what's at your library, or elsewhere. Preparation of vegetables for the table / by Maria ... v.256(1906). - Full View. Old Elizabethan Recipes. The term "vegetable" was used only rarely during the Elizabethan era. Instead the term "herb" covered all green plants, roots and herbs.

Food items which came from the ground were only are considered fit for the poor. Vintage Recipes: Recipes. BookFeeding America. Feeding America. Feeding America: The Historic American Cookbook Project The Project The Feeding America project has created an online collection of some of the most important and influential American cookbooks from the late 18th to early 20th century. The digital archive includes page images of 76 cookbooks from the MSU Library's collection as well as searchable full-text transcriptions. This site also features a glossary of cookery terms and multidimensional images of antique cooking implements from the collections of the MSU Museum. Internet Archive Search: cooking books. American Libraries : Free Books : Free Texts : Download & Streaming. California Digital Library. Recipes and Cookbooks - OnLiving - The Henry Ford. Yesterdish.com. 16 Old-Fashioned Recipes Through The Decades.

Old Recipe Books - Basic Home Cooking and Canning Recipes. Old Rival Crockpot Recipes and Directions Manual. Home >> Rival Crockpot Recipe manual I can't remember where I picked up this old manual for a Rival Crockpot. I'm thinking it was at a garage sale. But I remember being delighted when I found it, because a friend gave me a crockpot. I love to be able to put something in the crockpot before I leave for work, and then come home to dinner already prepared.

All I have to do is dish it out. Sometimes I put a whole chicken in it before I go to bed at night, and let it cook all night long on LOW. I took pictures of the pages of the Rival Crockpot Manual. RecipeCurio.comGraham Cracker Pudding Recipe. This recipe was clipped from the Akron Beacon Journal newspaper, date unknown but it mentions “rations” and the winner of a Glenna Snow cook book which was distributed by Akron Beacon Journal in the late 1930s and 1940s so this probably dates from that time.

Recipe is typed below (I omitted the cook book winner’s information) along with a scanned copy. RecipeReminiscing. A classic recipe from an ad for Sunkist Lemons published in 1932. RecipeReminiscing. Ko-ko-nut pie recipe (1950) - Click Americana. Untitled. "History is Served" presented by Colonial Williamsburg Historic Foodways. Pork Sausage Patties on Fried Mush, ca. 1920. If you have been reading this blog since I began 18 months ago, you’ll recall that a meal at the Eagle Tavern at Greenfield Village in Dearborn, Michigan was the catalyst for my journey into historic food.