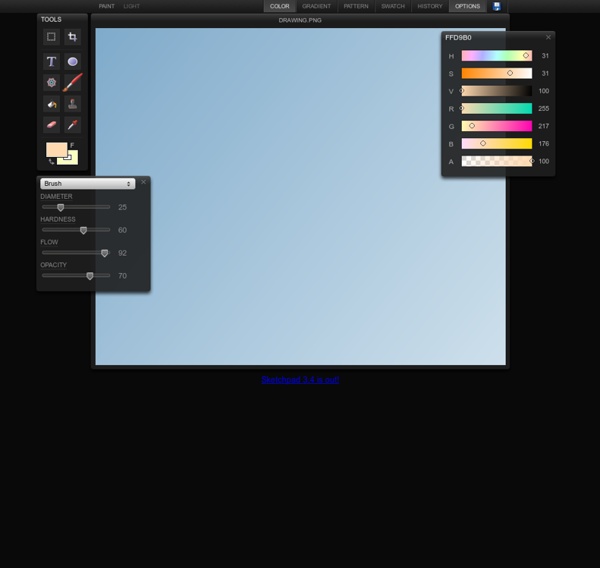 Create Something. Donate Login Remember Me Create An Account Forgot Password Rajacenna Draws Celebrity Portraits Rajacenna is an 18-year-old self-taught artist from the Netherlands who draws the most realistic portraits I have ever seen, using only pencils. I’m a big fan of realistic drawings, and I’ve previously featured amazing works like the pencil drawings of Paul Lung, the ballpoint pen portraits of Juan Francisco Casas, or Cristina Penescu’s detailed scratchboard masterpieces, but at only 18 years of age Rajacenna is in a league of her own. Born in 1993, she started modelling for various Dutch companies when she was only 4, and at 5 years old she made her first appearance on television. She starred in films, soap-operas and tv-series and at 12 she became the host of Kinderjournaal, the first Dutch web-tv for kids. She only took up drawing in 2009, and although she had never taken any art classes she produced some stunning pieces. Reddit

23 Free, Vector Icon Packs for Social Media It's massive freebie time again! We've rounded up a huge collection of social media icons in, you guessed it, vector format. These designs are simple, clean, and versatile. They're easy to integrate into your next app, interface, blog, web design, or anything you have in the pipeline that needs to connect via social networking. There are multiple unique pack designs, and hundreds of free vector icons to grab a hold of. Now's the time to download these freebies, so get to it. free online paint program Flame Painter is a unique paint program, it belongs to my 'I am an Artist' experimental project. I think with tools which inspires you, everyone can be an artist. You can try it here, change different brush settings and paint your own flame paintings. When you change the background from black to white, the palette changes from additive to subtractive and the feeling of the painting is very different. It's not easy to explain all brush parameters, so I leave this for your experimentation.

The 25 Largest Facebook Games As 2010 Begins - Flock The 25 Largest Facebook Games As 2010 Begins While 2009 was the year social games exploded into the mainstream consciousness, developers aren’t slowing down as 2010 begins. Instead, they’re only speeding up – hiring more coders and artists, spending more intelligently on customer acquisition, and in some cases, releasing new games every 4 weeks. Here’s a look at the top 25 Facebook games as we enter what will surely be the biggest year for social gaming yet, from Inside Social Games: Interestingly, December was a mixed end to the year, as traffic stayed level or fell for most of the biggest Facebook games during December, according to AppData. 10 of the top 25 games saw decreases from December 1, 2009 to January 1, 2010.

Create an animation online with AnimateStar ABCya is the leader in free educational computer games and mobile apps for kids. The innovation of a grade school teacher, ABCya is an award-winning destination for elementary students that offers hundreds of fun, engaging learning activities. Millions of kids, parents, and teachers visit ABCya.com each month, playing over 1 billion games last year. Apple, The New York Times, USA Today, Parents Magazine and Scholastic, to name just a few, have featured ABCya’s popular educational games. ABCya’s award-winning Preschool computer games and apps are conceived and realized under the direction of a certified technology education teacher, and have been trusted by parents and teachers for ten years.

The Doodle Art of Sergei and Vyacheslav Savelyv Sergei and Vyacheslav Savelyv are two twin brothers with an extraordinary talent for doodling. They uses colored pens and pencils to draw what seem like endless circular doodles and create incredibly detailed portraits of world famous icons. Sergei and Vyacheslav Savelyv have so far displayed their wonderful artworks only in their home town of Petrozavodsk, in Russia’s Karelia region, but I think you’ll agree their talent deserves worldwide recognition. The creative duo who works under the name “SaveL” have an impressive doodle portrait portfolio of famous celebrities like Johnny Depp, Robert De Niro or Antonio Banderas, all created with ordinary pens of pencils. Their technique looks a lot like what many of us used to do on the back of our notebooks in school to check is a pen still worked, only their loops form very detailed images.

15 Desktop & Online Wireframing Tools Like most things today, the world of interaction design moves quickly. Although a pen and notebook may suffice when it comes to simply jotting down ideas, planning a series of website screens can sometimes demand additional precision and cohesion. This is where today’s wireframing tools come in. Engineered to make the design process as intuitive as possible, these tools allow you to construct a visual representation of your interface. Some even allow designers to construct interactive prototypes in order to receive user feedback before a single line of code is written. The following list comprises 15 of the most prominent wireframing applications available today. The essential guide to using Instagram filters like a pro 22 November '12, 04:00am Follow With more than 100 million users worldwide on both iOS and Android, Instagram’s success as a mobile platform is clear to see and now with its expanded web presence, there are now more opportunities than ever to show off your photography skills. However, how many times do you take a photo and use a filter without really thinking about it?

How to Create Secret Codes and Ciphers: 14 steps Edit Article Sample Coded ParagraphsCodesCiphersSecret Languages Edited by General Jackson, Sarah Eliza, Teresa, Maluniu and 77 others Elcomeway otay yptographycray ithway ikihowway! Whether you're writing notes to your friends in class or trying to get into cryptography (the study of codes and ciphers) as a hobby, this article can help you learn some of the basics and get you on your way to encoding your own messages. Just see Step 1 below to get started! Free Brain Games Training Online - Improve Memory, Have Fun! Training your brain with free online brain games is a fun way to keep your mind active and potentially improve your memory, concentration, and other brain skills. There are now over 250 free brain training games on this site. Not sure where to start? Check out the most popular games. Also see the game categories in the sidebar at right and in the menu above. Examples of popular games include Scrabble Sprint, Butterfly Connect, and Basic Solitaire.