Abusive Relationships. The Work of Byron Katie. Recovering from Trauma. Not everyone who endures a traumatic experience is scarred by it; the human psyche has a tremendous capacity for recovery and even growth. 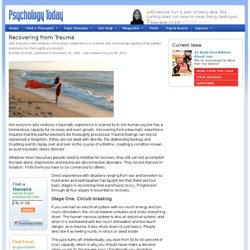 Recovering from a traumatic experience requires that the painful emotions be thoroughly processed. Trauma feelings can not be repressed or forgotten. If they are not dealt with directly, the distressing feelings and troubling events replay over and over in the course of a lifetime, creating a condition known as post-traumatic stress disorder . Whatever inner resources people need to mobilize for recovery, they still can not accomplish the task alone. Depression and trauma are disconnective disorders. Direct experience with disasters ranging from war and terrorism to hurricanes and earthquakes has taught me that there are four basic stages in recovering from a profound stress . Stage One: Circuit-breaking If you overload an electrical system with too much energy and too much stimulation, the circuit breaker activates and shuts everything down.

PTSD C-PTSD. Healing. Gasligjting. Am I in one? Healing emotional honesty. Gaslighting, is an abuser using this trap on you? One of the most diabolical emotional abuses is Gaslighting. 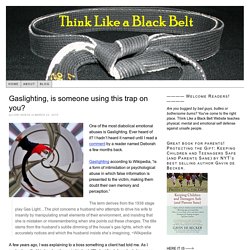 Ever heard of it? I hadn’t heard it named until I read a comment by a reader named Deborah a few months back. Gaslighting according to Wikipedia, “is a form of intimidation or psychological abuse in which false information is presented to the victim, making them doubt their own memory and perception.” The term derives from the 1938 stage play Gas Light…The plot concerns a husband who attempts to drive his wife to insanity by manipulating small elements of their environment, and insisting that she is mistaken or misremembering when she points out these changes.

The title stems from the husband’s subtle dimming of the house’s gas lights, which she accurately notices and which the husband insists she’s imagining. A few years ago, I was explaining to a boss something a client had told me. He insisted “You are just being too sensitive” and “You are being too defensive about all this.” Want to know more? Thank you for visiting! Color codes help build awareness and vigilance. Basic self defense articles explain the value of being more aware of your surroundings, but few teach how to develop awareness. 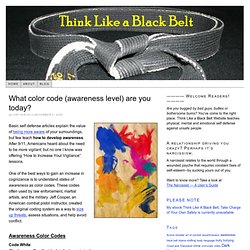 After 9/11, Americans heard about the need to be more vigilant, but no one I know was offering “How to Increase Your Vigilance” lessons. One of the best ways to gain an increase in cognizance is to understand states of awareness as color codes. These codes often used by law enforcement, martial artists, and the military. Jeff Cooper, an American combat pistol instructor, created the original coding system as a way to size up threats, assess situations, and help avoid conflict. Awareness Color Codes Code WhiteClueless –– offers the ideal victim to a criminal People in code white are oblivious to their surroundings: In each of these situations, the mind is directed at a specific activity so that no awareness is used to scan nearby surroundings and activities. Code Yellow Alert, but relaxed – a warrior’s default mindset.

Emotional abuse is Heart and Soul Mutilation. A Definition of Codependence "Codependence is a primary, progressive, chronic, fatal, and treatable disease which is caused by being raised in an emotionally dishonest, Spiritually hostile environment. 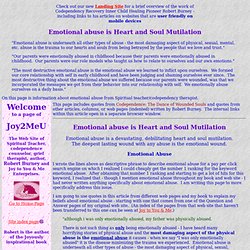 The primary environment is the family system which is part of the larger emotionally dishonest and dysfunctional society which is part of a civilization that is based on false beliefs about the nature and purpose of being human. Codependence is characterized by dependence on outer or external sources for self-worth and self-definition. This outer or external dependence, combined with unhealed childhood emotional wounds which get reactivated whenever an emotional "button" is pushed, cause the Codependent to live life in reaction to, give power over self-esteem to, outside sources. " - Codependence Defined We live in societies that are only a few generations removed from the belief that children and women were property.

Love is also not an addiction. Emotional Honesty and Emotional Responsibility Part 2 - codependence recovery. Gaslighting « Caught in the Cogs. According to Wikipedia, Gaslighting “is a form of intimidation or psychological abuse in which false information is presented to the victim, making them doubt their own memory and perception.” 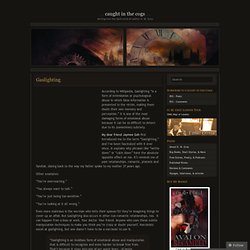 It is one of the most damaging forms of emotional abuse because it can be so difficult to detect due to its (sometimes) subtlety. My dear friend Jaymee Goh first introduced me to the term “Gaslighting,” and I’ve been fascinated with it ever since. It explains why phrases like “settle down” or “calm down” have the absolute opposite effect on me. It’s reminds me of past relationships, romantic, platonic and familial, dating back to the way my father spoke to my mother 37 years ago. Other examples: Loveisrespect.org. This Is A War - ABUSE. A definition of verbal abuse - You understand their feelings, but they never attempt to understand yours; - They dismiss your difficulties or issues as unimportant or an overreaction; 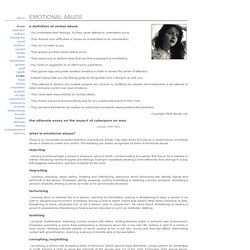