17 Psychological Tricks To Make People Like You Immediately. Most friendships develop so naturally that you don’t even realize how or when they started. 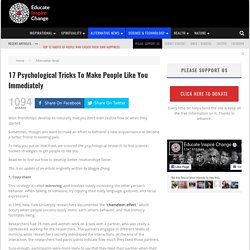 Sometimes, though, you want to make an effort to befriend a new acquaintance or become a better friend to existing pals. To help you out on that front, we scoured the psychological research to find science-backed strategies to get people to like you. Read on to find out how to develop better relationships faster. This is an update of an article originally written by Maggie Zhang. 1. This strategy is called mirroring, and involves subtly mimicking the other person’s behavior.

In 1999, New York University researchers documented the “chameleon effect,” which occurs when people unconsciously mimic each other’s behavior, and that mimicry facilitates liking. Researchers had 78 men and women work on a task with a partner, who was really a confederate working for the researchers. 7 Stages of Gaslighting in a Relationship. 15 Common Forms of Verbal Abuse in Relationships.

8 Things the Most Toxic People in Your Life Have in Common. How to Make Friends by Asking Questions. Why You and Your Mother-in-Law May Not Get Along. 11 Signs of Gaslighting in a Relationship. A Simple Lie Detection Technique You Can Actually Use. 5 Reasons Why Some People Will Never Say Sorry. 17 Psychological Tricks To Make People Like You Immediately. Most friendships develop so naturally that you don't even realize how or when they started. 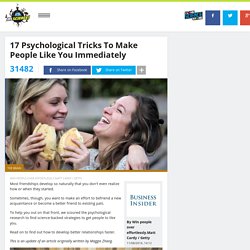 Sometimes, though, you want to make an effort to befriend a new acquaintance or become a better friend to existing pals. To help you out on that front, we scoured the psychological research to find science-backed strategies to get people to like you. Read on to find out how to develop better relationships faster. This is an update of an article originally written by Maggie Zhang. Flickr/Art Comments 1. This strategy is called mirroring, and involves subtly mimicking the other person's behavior.

In 1999, New York University researchers documented the "chameleon effect," which occurs when people unconsciously mimic each other's behavior, and that mimicry facilitates liking. Researchers had 78 men and women work on a task with a partner, who was really a confederate working for the researchers. Universal 2. 16 Essential Secrets of Body Language - Superhv. Up to 80% of the information we receive from a person in conversation is transmitted non-verbally. 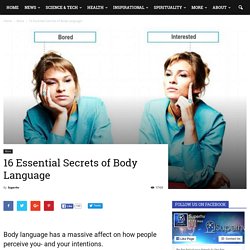 A lot of the time though, we don’t understand precisely what feelings they’re trying to express through their body. We decided that it was time to uncover the secrets of body language. Some of these can really help you understand what a person is thinking and feeling, even when they don’t say a word about it. 9 Important Reminders For A People Pleaser (and strategies on how to stop being one) People-pleasers “want everyone around them to be happy and they will do whatever is asked of them to” keep it that way, according to Susan Newman, Ph.D, a New Jersey-based social psychologist and author of The Book of No: 250 Ways to Say It—And Mean It and Stop People-Pleasing Forever. 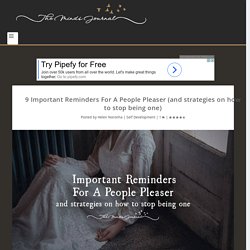 “They put everyone else before themselves,” she said. For some, saying “yes” is a habit; for others, “it’s almost an addiction that makes them feel like they need to be needed.” This makes them feel important and like they’re “contributing to someone else’s life.” People-pleasers yearn for outside validation. Their “personal feeling of security and self-confidence is based on getting the approval of others,” said Linda Tillman, Ph.D, a clinical psychologist in Atlanta, GA and assertiveness expert. They worry how others will view them when they say no.

The Caveman Rules of Survival: How to Overcome Subconscious Instincts That Don't Work in the Modern Day. What Great Listeners Actually Do. Executive Summary What makes a good listener? 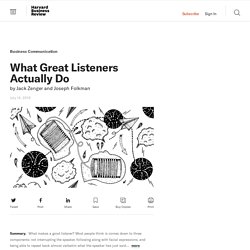 Most people think is comes down to three components: not interrupting the speaker, following along with facial expressions, and being able to repeat back almost verbatim what the speaker has just said. According to research from Zenger and Folkman, however, we’re doing it all wrong. 12 Things Truly Confident People Do Differently. True confidence—as opposed to the false confidence people project to mask their insecurities—has a look all its own. 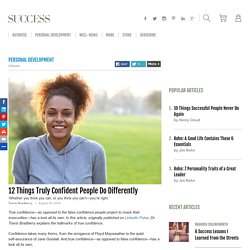 In this article, originally published on LinkedIn Pulse, Dr. Travis Bradberry explains the hallmarks of true confidence. Confidence takes many forms, from the arrogance of Floyd Mayweather to the quiet self-assurance of Jane Goodall. Women Need A Tribe- Here’s Why: – Mystical Raven. Female friendships are just a hop to our sisterhood, and sisterhood can be a very powerful force – Jane Fonda In ancient times women shared a lot more than they do today. 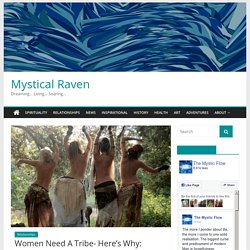 They shared care of their babies, gathered food and cooked together. The women and the children shared their lives intimately, and were a source of strength and comfort to each other on a daily basis. Traditions like the Red Tent, where women came together during menstruation to be together, often with synchronised cycles, were a beautiful time for nurturing, sharing women’s business and keeping each other resilient and happy. Today, women are a lot more isolated in their own homes and lives and more separate from each other. Study: Polite People More Likely to Betray Friends. Five Keys to Enhancing Your Emotional Intelligence. Motional Intelligence (EQ or EI ) can be defined as the ability to understand, manage, and effectively express one's own feelings, as well as engage and navigate successfully with those of others. 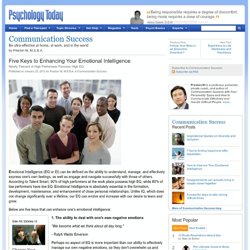 According to Talent Smart, 90% of high performers at the work place possess high EQ, while 80% of low performers have low EQ. Emotional Intelligence is absolutely essential in the formation, development, maintenance, and enhancement of close personal relationships. Unlike IQ, which does not change significantly over a lifetime, our EQ can evolve and increase with our desire to learn and grow. Below are five keys that can enhance one's emotional intelligence: - Ralph Waldo Emerson. 10 Toxic Relationships Mentally Strong People Avoid. “All failed relationships hurt, but letting go of a toxic relationship is actually a gain, not a loss.” 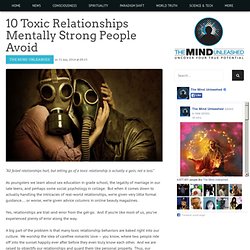 As youngsters we learn about sex education in grade school, the legality of marriage in our late teens, and perhaps some social psychology in college. But when it comes down to actually handling the intricacies of real-world relationships, we’re given very little formal guidance… or worse, we’re given advice columns in online beauty magazines. Yes, relationships are trial-and-error from the get-go. The Most Important Part of an Apology (and the Least) 7 Body Language Tricks to Make People Like You - Motto. 5 Reasons Why Some People Will Never Apologize. 5 Ways to Help a Loved One to Recover From Substance Abuse – American Times. Battling addiction is never easy, especially when the victim doesn’t have support. 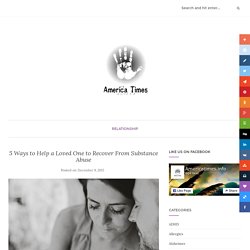 Does Narcissism Drive Your Urge to Compete? The Art of Fighting Without Fighting. “Supreme excellence consists in breaking the enemy’s resistance without fighting.” –Sun Tzu “It is useless to fight against people’s rigid ways, or to argue against their irrational concepts. You will only waste time and make yourself rigid in the process. Why Love Can Turn Into Rage. 9 Things Only Passive-Aggressive People Do. How to Attract Positive Relationships (& Drop the Negative Ones Too!) By Andrea Schulman,Guest writer, BodyMindSoulSpirit.com Do you know how to attract positive relationships into your life, or do you often feel surrounded and overwhelmed by negativity?

How to Love: Legendary Zen Buddhist Teacher Thich Nhat Hanh on Mastering the Art of “Interbeing” By Maria Popova “To love without knowing how to love wounds the person we love.” What does love mean, exactly? We have applied to it our finest definitions; we have examined its psychology and outlined it in philosophical frameworks; we have even devised a mathematical formula for attaining it. And yet anyone who has ever taken this wholehearted leap of faith knows that love remains a mystery — perhaps the mystery of the human experience.

I Heart Intelligence 9 behaviors that push people away from you. Social Science Says Lasting Relationships Come Down To 2 Basic Traits. In her article, “Master of Love” author Emily Smith states that of all the couples that get married, only 3 in 10 remain in healthy, happy marriages, as psychologist Ty Tashiro points out in his book “The Science of Happily Ever After.” Every day in June, the most popular wedding month of the year, about 13,000 American couples will say “I do,” committing to a lifelong relationship that will be full of friendship, joy and love that will carry them forward to their final days on this earth.

The Study Of Marriage. 9 Ways to Increase Your Charisma. Why Relationships Can Never Be 50-50 Propositions. The Four Qualities of Love, by Thich Nhat Hanh. “The teachings on love given by the Buddha are clear, scientific, and applicable… Love, compassion, joy, and equanimity are the very nature of an enlightened person. They are the four aspects of true love within ourselves and within everyone and everything.” ~Thich Nhat Hanh The following is a description of the Buddha’s teachings on the four qualities of love, from the first chapter of Teachings on Love, written by Thich Nhat Hanh… “Happiness is only possible with true love. Eight Traits of the Perfect Workout Partner. New Study Links Social Anxiety To Being An Empath. Written by Amateo Ra| Have you ever felt anxious being around other people?

Habits Of Exceptionally Likable People. 7 THINGS THE MOST INTERESTING PEOPLE ALL HAVE IN COMMONThe OODAThe OODA. 8 Emotional Patterns That Can Disturb Our Inner Peace. 11 Secrets to Ending Fights in Your Relationships. Whether you like someone or not there are going to be times when you have disagreements with your friends, family, partners, spouse, co-workers, or neighbors. 9 Ways to Increase Your Charisma. Northfoto / Shutterstock.com When Prince finished a showcase performance in a small Minneapolis movie theater on January 7, 1979, the Warner Records representatives walked out shaking their heads. Prince couldn’t believe it. How to Grow Close By Asking the Right Questions.

5 Lessons from Ending a Friendship. Friendship: The Laws of Attraction.