Liza Donnelly: Drawing on humor for change. Do Toy Companies Need More Women at the Top? Lego has two women on its senior leadership team; Mattel has one. 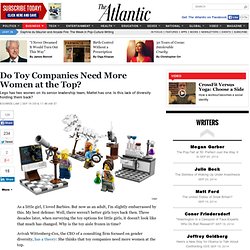 Is this lack of diversity holding them back? Lego As a little girl, I loved Barbies. But now as an adult, I'm slightly embarrassed by this. My best defense: Well, there weren't better girls toys back then. Avivah Wittenberg-Cox, the CEO of a consulting firm focused on gender diversity, has a theory: She thinks that toy companies need more women at the top. Wittenberg-Cox makes her case based on her observations of Lego, which has long been criticized for the gender imbalance in its product offerings.

So would having more women at the top produce more girl-friendly Legos and Barbies? Debbie Sterling, founder of GoldieBlox, an engineering toy for girls, agrees with Wittenberg-Cox: The toy industry needs more women, or the toys will continue to be stuck in the past. Sterling remembers her first visit to the American International Toy Fair in New York: "I was shocked at how male dominated the toy world is ... Do pink toys stop women from becoming scientists? Chai - the drink India can't live without. In India, chai is more than just a cup of tea to start the day - the thick sweet drink is an integral part of the rhythm of life. 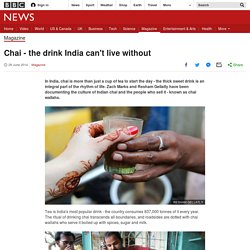 Zach Marks and Resham Gellatly have been documenting the culture of Indian chai and the people who sell it - known as chai wallahs. Image copyright Resham Gellatly Tea is India's most popular drink - the country consumes 837,000 tonnes of it every year. The ritual of drinking chai transcends all boundaries, and roadsides are dotted with chai wallahs who serve it boiled up with spices, sugar and milk. High Court rules against federal government funding of school chaplains. High Court says federal funding for school chaplains is unlawful Despite ruling Scripture Union (SU) Qld is confident that program will continue Abbott Government is considering its options Labor will continue to support school chaplains program PM Tony Abbott says the government will closely study the High Court's decision to declare the chaplaincy program invalid. 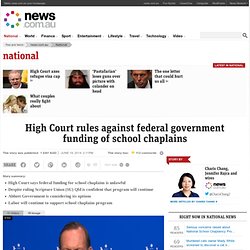 Serious concerns raised about National School Chaplaincy Program as government reaffirms commitment to initiative. The High Court has ruled in favour of a challenge to government funding of the school chaplaincy program. 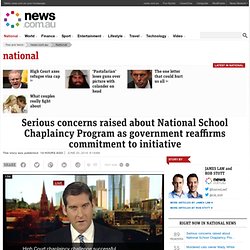 To access our premium content,please subscribe or log in. It's quick and easy. Your video will begin in 5 seconds THE Federal Government has reaffirmed its commitment to funding chaplains in Australian schools, despite serious concerns that the system is failing our most vulnerable youth. The High Court found yesterday that the funding model for the National School Chaplaincy Program was unconstitutional, but Prime Minister Tony Abbott said he wanted the initiative to continue. Reading Comprehension: Online Dating. Multilingualism: Johnson: Do different languages confer different personalities? Mixed marriages in China a labour of love. 24 October 2013Last updated at 00:23 GMT By Zoe Murphy BBC News Jocelyn and Jun have been married for nine years "From the first time I started to love a Chinese man, hiding became part of my life," says American Jocelyn Eikenburg. 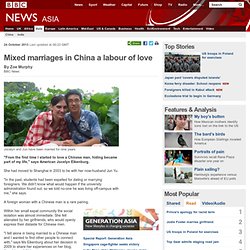 She had moved to Shanghai in 2003 to be with her now-husband Jun Yu. "In the past, students had been expelled for dating or marrying foreigners. We didn't know what would happen if the university administration found out, so we told no-one he was living off-campus with me," she says. A foreign woman with a Chinese man is a rare pairing. Within her small expat community the social isolation was almost immediate. "I felt alone in being married to a Chinese man and I wanted to find other people to connect with," says Ms Eikenburg about her decision in 2009 to share her experiences on her blog, Speaking of China.

Andrew McAfee: What will future jobs look like? The Most Beautiful Thing (Short Film) Five of the worst public marriage proposals. When we were on holiday in Australia, my boyfriend thought up an elaborate ruse to get me to a romantic clifftop location. LOOK: Kawaii: The Latest Japanese Craze To Sweep Britain. The look may resemble a doll that has met an unfortunate accident with a vat of LSD, but the current craze sweeping over from Japan is Kawaii. 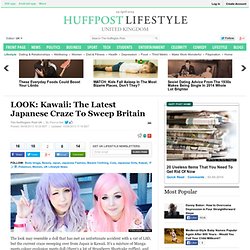 It's a mixture of Manga meets colour explosion meets doll (there's a lot of Strawberry Shortcake ruffles), and The Sun reported: Followers are flocking to conventions, pageant-style competitions and clubs across the UK to show off their style and gain inspiration from other fans. In Britain, there is an annual UK Kawaii Star of the Year competition, which takes place every July at the Hyper Japan exhibition in Earls Court, London. This year's winner is Scarlett Young who also adores "cute food". According to Wikipedia and the Urban Dictionary, "Kawaii means pretty, cute, adorable and lovable.

" Kawaii requires a strong constitution for all things frilly and cute, and Grace St John, 21, a kawaii lover said in The Independent that it's a reaction to the low-cut tops and short skirts prevalent in UK fashion at the moment.