8 Important Reasons To Let Go Of People Who No Longer Play An Important Part ... There comes a point in every person's life when he or she parts ways with someone: ex, friend and anyone in between. 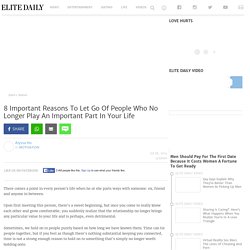 24 Real-Life Habits Of Actual Couples. When it comes to relationship advice, sometimes it’s more effective to see what’s working for others than seek out so called ‘relationship experts’. 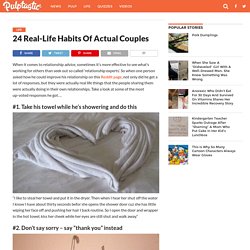 So when one person asked how he could improve his relationship on this Reddit page, not only did he get a lot of responses, but they were actually real life things that the people sharing them were actually doing in their own relationships. Take a look at some of the most up-voted responses he got… #1.

Love is Not Enough. In 1967, John Lennon wrote a song called, “All You Need is Love.” He also beat both of his wives, abandoned one of his children, verbally abused his gay Jewish manager with homophobic and anti-semitic slurs, and once had a camera crew film him lying naked in his bed for an entire day. Thirty-five years later, Trent Reznor from Nine Inch Nails wrote a song called “Love is Not Enough.” Reznor, despite being famous for his shocking stage performances and his grotesque and disturbing videos, got clean from all drugs and alcohol, married one woman, had two children with her, and then cancelled entire albums and tours so that he could stay home and be a good husband and father.

One of these two men had a clear and realistic understanding of love. One of them did not. Is Social Media Killing Your Marriage? Your wife comes to bed late — again — after spending hours on Facebook. 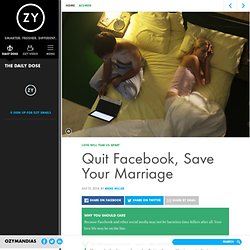 Maybe you feel like your husband is more focused on Twitter than you. Here’s a pro tip: You’re not imagining it. An Open Letter To My Future Wife: How I Plan To Make You Happy Every Day Of Y... Hello, my future wife. 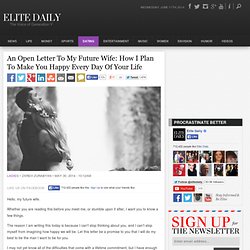 Whether you are reading this before you meet me, or stumble upon it after, I want you to know a few things. The reason I am writing this today is because I can’t stop thinking about you, and I can’t stop myself from imagining how happy we will be. When You Find The Right Person, She'll Be The Most Beautiful Girl You KnowEli... I believe guys should only date the most beautiful girls they know. 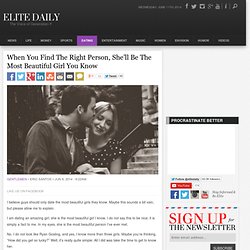 Maybe this sounds a bit vain, but please allow me to explain. I am dating an amazing girl; she is the most beautiful girl I know. 15 Ways We Can Put An End To The Dishonest Dating Culture We've CreatedElite ... What is the dating game, you ask? 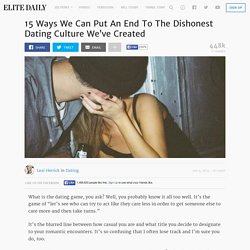 Well, you probably know it all too well. It’s the game of “let’s see who can try to act like they care less in order to get someone else to care more and then take turns.” 5 Things I'm Going To Tell My Son On His Wedding Day. By Sophie Rosen for DivorcedMoms.com My son is nine years old. 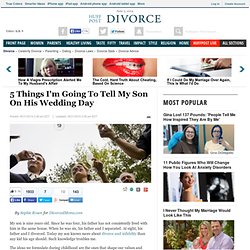 Since he was four, his father has not consistently lived with him in the same house. When he was six, his father and I separated. At eight, his father and I divorced. Today my son knows more about divorce and infidelity than any kid his age should. 5 Telltale Signs You're Settling For Less In Life & Love. 20 Signs It's Time To Let Go & Move On We find out how strong we are in the moments of uncertainty life inevitably gives us. 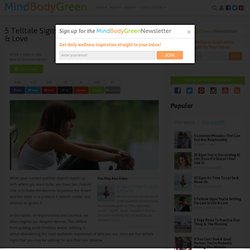 The unplanned events – layoffs, death, disease or divorce – can come crashing into our world at any moment. Read. 7 Habits Happy People Have (But Never Talk About) This post is just the tip of the iceberg! 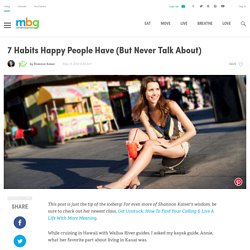 For even more of Shannon Kaiser's wisdom, be sure to check out her newest class, Get Unstuck: How To Find Your Calling & Live A Life With More Meaning. While cruising in Hawaii with Wailua River guides, I asked my kayak guide, Annie, what her favorite part about living in Kauai was. She smiled brightly and beamed, "I'm so rich here. If You Can't Find A Good Partner, You're Probably Making This Mistake. There's a huge mistake that many people make when it comes to finding love. 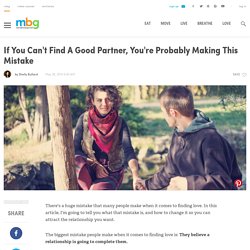 5 Common Mistakes That Can End Any Relationship. It's a sad truth that our culture provides very little accurate education that would help people navigate the tricky road of relationships. Like sex, we're expected to jump into this arena of intimate love, the place that calls up all of our shadows, demons, and fears more than anything else, and know what we're doing.

Nobody knows what they're doing. How to Tell if You Are Self Absorbed: 5 Steps. Edit Article. The Guide to Strong Boundaries. This post is long overdue. Since I wrote Models: Attract Women Through Honesty and mentioned the importance of maintaining strong personal boundaries, people have been asking me what boundaries actually are, what they look like, how to build them and maintain them, do they help that much, are they that important, do they stop your girlfriend from farting too much in her sleep, where are my keys, have you seen my keys, where are my damn keys? PSA: Setting strong personal boundaries are not a cure-all for your relationship woes (or your lost keys). In fact, they’re more of a side effect of having a healthy self-esteem and a general low level of neediness with people around you. Boundaries work both ways: they create emotional health and are created by people with emotional health. Coping with Unreliable People. Whether in the workplace or in day-to-day life, you are bound to run across people who will promise to keep a commitment but falter in the end.

Quite simply, these people are "unreliable. " They are the staff without drive to follow through on complex projects and the friends or relatives who do not show up when you have nicely asked them to. Effectively coping with unreliable people comprises three steps: indentifying, accepting, and moving on.

Identifying Unreliable People First, it must be understood that being unreliable is an act of defiance. This first step to coping with unreliable people is often the most difficult one, because it means that the victim of the unreliable acts must evaluate circumstances for what they really are. The reasons for why unreliable people commit these acts of defiance are varied and great, and they range from someone powerless wanting to get revenge to someone afraid of a new level of responsibility that awaits should he succeed at a task.

Is my girlfriend cheating or is she just selfish? - relationship advice. Reader Letters #1, Part 1. Last year, a reader named Bill wrote me asking for help with an ex-girlfriend who was making his life hell by spreading false rape rumors about him around their community. We spoke back and forth, and I determined she suffered from Cluster B personality disorders, particularly Narcissistic Personality Disorder, Borderline Personality Disorder and Histrionic Personality Disorder. Smear campaigns are a big part of a narcissist’s M.O. I gave him some advice, he took it and reported back that it helped him greatly. He thanked me, and I didn’t hear from him in a while. Last week, I got another email from Bill: 8 Signs You're In The Right Relationship. A New Solution That Stops Snoring and Lets You Sleep.

Last Updated: 4/13/2014 22:22 PST If you constantly feel exhausted, experience headaches for no obvious reason or have high blood pressure, it could be the result of snoring. More than a simple annoyance, snoring is also the most common symptom of a potentially serious health problem—obstructive sleep apnea (OSA). Over 18 million Americans snore, and it’s related to OSA. Stress is a choice. Nearly eight in 10 Canadians experience excessive or uncomfortable levels of stress from various sources and this number increases to nine in 10 among Canadians 18 to 24, according to the 2013 Sun Life Canadian Health Index Report. In the grand scheme of things though, Canada is still ranked as one of the least stressed countries in the world according to Bloomberg's Most Stressed-Out: Countries ranking based on parameters such as homicide, corruption, and unemployment. Gasping Through Marriage: Are We Asking Too Much? (Katsunojiri/flickr) Marriage — as anyone who has watched “House of Cards,” or actually experienced the giddy highs and devastating lows of a real, ’til-death-part-us union, knows — is complicated.

And, with the divorce rate hovering around 50 percent, it’s reasonable to once again ask the question: What’s the secret to a successful marriage?