19 Things Married People Want Single People To Know Before They Commit. 45 Things I Want My Future Daughters To Know. I have no way of knowing if I will ever have children. 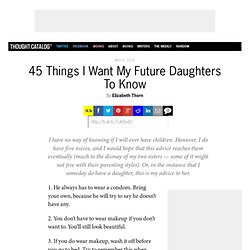 However, I do have five nieces, and I would hope that this advice reaches them eventually (much to the dismay of my two sisters — some of it might not jive with their parenting styles). Or, in the instance that I someday do have a daughter, this is my advice to her. 1. He always has to wear a condom. Bring your own, because he will try to say he doesn’t have any. 2. 3. 4. 5. 16 Signs The Person You’re Dating Is A Catch. 1. 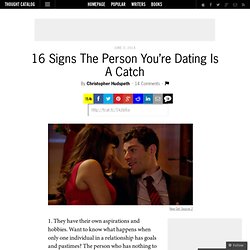 They have their own aspirations and hobbies. Want to know what happens when only one individual in a relationship has goals and pastimes? The person who has nothing to do gets upset at the one who wants to spend a portion of their day enjoying beloved activities or focusing on passion projects, and it’s a recipe for disaster. 2. 11 Hilariously Dumb Fights All Healthy Couples Have. My parents always say that they didn’t really love each other until they argued for the first time; “it was love at first fight.” 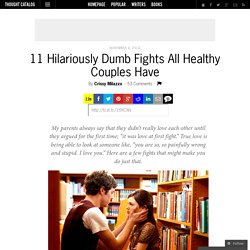 True love is being able to look at someone like, “you are so, so painfully wrong and stupid. I love you.” Here are a few fights that might make you do just that. 1. The music in the car During the honeymoon period of your relationship, both of you got equal play with the iPod cord. 7 Awesome Ways Sex Benefits Men. Feel like he’s always thinking about sex? 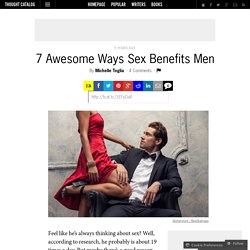 Well, according to research, he probably is about 19 times a day. But maybe there’s a good reason for it: His life could depend on it. Orgasms can work wonders for your health, from easing your menstrual cramps to lowering your risk of diabetes, but what about your guy? In honor of Men’s Health Month, we count down the ways your lovin’ is lending him a helping hand. Make sure he thanks you for keeping him in tip-top shape. To The Girl Whose Boyfriend I’m Sleeping With. Sorry, but I’m not sorry. 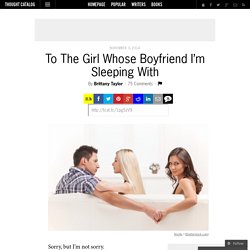 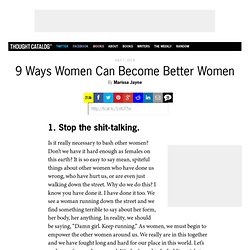 Stop the shit-talking. Is it really necessary to bash other women? Don’t we have it hard enough as females on this earth? It is so easy to say mean, spiteful things about other women who have done us wrong, who have hurt us, or are even just walking down the street. Why do we do this? 5 Reasons Why Today’s Idea Of Marriage No Longer Works. I was 28 when I decided to leave my husband and start a new life. 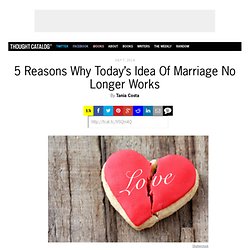 Marriage just wasn’t for me. At one point I was in love with him but how our marriage was set up, how society told us our marriage should be, just did not work. So what is it that has us all messed up? 1. Spending too much money on the wedding day. I spent 40k on my wedding and that was after “haggling” and searching for ‘bargains’. 2. 5 Ways To Be More Attractive To Whomever You Want To Sleep With. Recently Thought Catalog published this article detailing 13 things a woman can do to be more attractive to men. 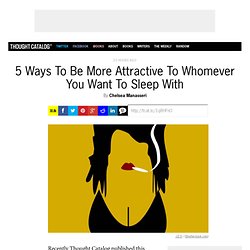 I’m a hairy-legged, granola-eating, card-carrying feminist, and I’m not going to accuse this article or its writer of being misogynistic. What the article is, however, is myopic. According to the standards set forth by this article, a woman like me should never get attention from men. Keeping It Casual: 9 Ways To Ensure Things Don’t Get Too Serious. The 20-something narrative seems to be increasingly obsessed with figuring things out and self-exploration. 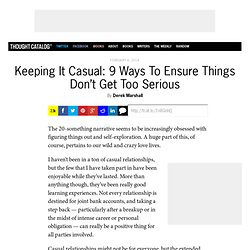 A huge part of this, of course, pertains to our wild and crazy love lives. I haven’t been in a ton of casual relationships, but the few that I have taken part in have been enjoyable while they’ve lasted. More than anything though, they’ve been really good learning experiences. Not every relationship is destined for joint bank accounts, and taking a step back — particularly after a breakup or in the midst of intense career or personal obligation — can really be a positive thing for all parties involved. Casual relationships might not be for everyone, but the extended fling can really be a boon to one’s everyday existence if done in a responsible and mature manner. 1.

Probably the most important rule by far. What It’s Like When You’re Afraid Of Losing The Love You Have. You want to think you’re the person that will know what they have when they have it. 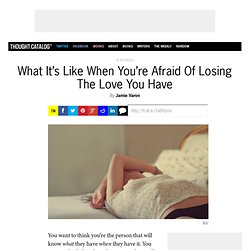 You want to think that the only way your love will break apart will be for typical reasons like they changed or you changed or there’s some glaring incompatibility you only noticed with time. You never want to think that perhaps the love you’ve been given is less than the love you think you deserve. You tell yourself that love is infinite, that nobody deserves more or less love, that you don’t have to earn or prove yourself to contain the love you have been given. Yet, these beliefs about love are beautiful in theory, but they become nearly impossible in practice, when you’re scared and up against the kind of love you’ve secretly wanted – yet feared – your entire life. 9 Qualities You Suddenly Find Attractive In Your Mid 20s. I’m not saying these things weren’t attractive to you before, but they’ve definitely been bumped to the top of your list now that you’re becoming a more fully formed adult human being. 1.

Focus They know what they want and they go after it — and nothing is sexier than someone with goals and the drive to make those things happen. Maybe they’re not exactly where they want to be in their career yet, but they know what a career actually is and they’re actively pursuing it. Yes please. 2. Do Girls Really Hate Each Other — Or Is That A Myth Invented To Divide Us? There is this longstanding assumption that girls secretly hate other girls.

That we are competitive, catty, and cruel to one another – and this is an exclusively feminine thing. Even my daughter’s hippy Waldorf educator, who wears felt overalls unironically, explained female behavior as “girls are just mean sometimes.” It seems like this has become a dynamic that is not only assumed, but accepted. Yet jealousy is not just a feminine phenomenon, so why is there the belief that women are the only ones who feel this way? Girls don’t hate girls any more than people sometimes hate people because so many of us struggle with feelings of insecurity – regardless if your genitals are flappy or pointy. Of course envy manifests itself differently between the genders. We exhibit vindictive behavior towards our same-sex peers because we feel threatened by those we believe to be most like ourselves.

To achieve self-aware communal support, people have to feel genuine confidence. 10 Signs You’re In A Healthy, Mature Relationship. We’ve all been in that childish relationship where we stay on the phone for hours, text each other back within minutes, fall asleep with the phone barely clinging to the pillow and getting a fit of anxiety if your significant other doesn’t respond within the nanosecond.

Here’s how you know you’ve grown out of the childish phase: 1. RESPECT: Respect comes first in a two way relationship. You both respect each other enough to grow as two beautiful individuals together and not one single person attached at the hip. You don’t harp on each other’s decisions, choices, lifestyle and personal space. 2. 3. 4. 11 Types Of Friends You Need To Have In Your 20s. 1. The friend who’s in medical school.

It’s impossible to know how much you need a friend who’s also a doctor-in-the-making until you have one and she asks you things like this: “Yo, what kind of doctor should I be? What do you think you’re going to want when you’re older? Plastic surgeon?” God bless her sweet soul. How To Be Loved. Force yourself to remember every morning, during every tedious car ride, in the little moments of your blurry daily routine — you are so lucky. The fact that someone has chosen, despite the limitless options out there in the world, to be with you even in your less flattering moments, is nothing short of magical. The day in and day out of love often serves to numb you to how great it is, but it is that very daily renewal of your unspoken vows that makes it impressive.

It’s so easy when you are infatuated — when everything is new, when you haven’t been faced with any real problems — but when you could draw their naked body with your eyes closed and they know every part of every favorite song you’ll sing along with, aways finding something new and exciting is as much something you decide as something that happens. Think about all of the things you could do better if you were being honest with yourself. At least once a day, focus all of your attention on them.

Feel it, every ounce of it. 5 Reasons Why You Shouldn’t Stay With A Cheater. When an ex-boyfriend of mine cheated on me, I ended up staying with him for a few months after I found out. I know every situation is unique and believe some relationships can survive infidelity; however, I personally do not condone staying in a relationship with someone unfaithful. 12 Bad Reasons to Break Up. 50 Fun, Cheap Dates (That Aren’t Netflix) 1. Cheer on an amateur sports team in your city. It’s just as fun as supporting a Real Team but tickets are dirt cheap. My city’s non-pro baseball team has a few dates during the summer where tickets are $5 and they have $1 beers all night.