10 Signs Your Partner Has an Avoidant Attachment Style and How to Deal with Them. Does your partner’s avoidant attachment style rattle your nerves? 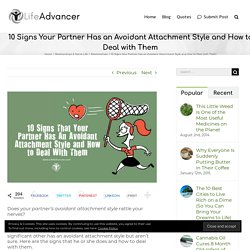 It’s frustrating when someone is unresponsive to your attempts at bonding or kindness. You may suspect that your significant other has an avoidant attachment style but aren’t sure. Here are the signs that he or she does and how to deal with them. Avoidant Attachment sounds like an oxymoron, but we should understand the words in the literal sense. They mean, as suggested, to avoid becoming attached emotionally. People with Avoidant Attachment styles struggle with intimacy issues.

People who have such emotional styles tend to disregard the feelings of others. Avoidant Attachment Style: The Types People who have an avoidant attachment approach to relationships are either fearful of intimacy or dismissive of their partners’ feelings. Those who are Dismissive-Avoidant tend to distance themselves emotionally from their partners. People with Fearful-Avoidant Attachment patterns are ambivalent and afraid of commitment.

A dissection of John Gottman's love lab. "My goal is to be like the guy who invented Velcro," marriage researcher John Gottman once told an interviewer. 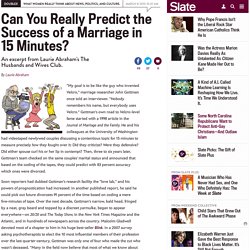 "Nobody remembers his name, but everybody uses Velcro. " Gottman's own road to Velcro-level fame started with a 1998 article in the Journal of Marriage and the Family. He and his colleagues at the University of Washington had videotaped newlywed couples discussing a contentious topic for 15 minutes to measure precisely how they fought over it: Did they criticize? Were they defensive? Did either spouse curl his or her lip in contempt? Soon reporters had dubbed Gottman's research facility the "love lab," and his powers of prognostication had increased: In another published report, he said he could pick out future divorcees 91 percent of the time based on coding a mere five-minutes of tape. As Gottman's acclaim has grown, I've many times thought that if we were brave enough, all of us marrieds and, most importantly, would-be marrieds, would take a trip to the love lab.

Watching Movies Cuts Divorce Rate In Half, Teaches Couples How To Be Compassionate And Listen. Life is beginning to imitate art, lament a select few. 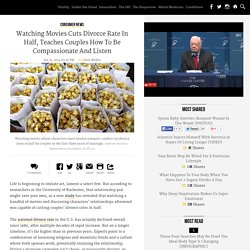 But according to researchers at the University of Rochester, that relationship just might save your own, as a new study has revealed that watching a handful of movies and discussing characters’ relationships afterward was capable of cutting couples’ divorce rates in half. The national divorce rate in the U.S. has actually declined overall since 1980, after multiple decades of rapid increase. About The Research -The Gottman Institute. The Gottman Institute, The Relationship Research Institute, Gottman Method Couples Therapy, and Dr. 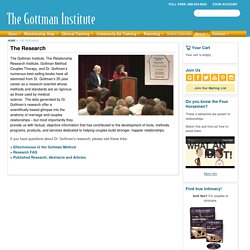 Gottman’s numerous best-selling books have all stemmed from Dr. Gottman’s 35-year career as a research scientist whose methods and standards are as rigorous as those used by medical science. The data generated by Dr. Masters of Love. Gottman wanted to know more about how the masters created that culture of love and intimacy, and how the disasters squashed it.

In a follow-up study in 1990, he designed a lab on the University of Washington campus to look like a beautiful bed-and-breakfast retreat. He invited 130 newlywed couples to spend the day at this retreat and watched them as they did what couples normally do on vacation: cook, clean, listen to music, eat, chat, and hang out. And Gottman made a crucial discovery in this study—one that gets at the heart of why some relationships thrive while others languish. Lasting Relationships Rely On 2 Traits. Ciência mostra as principais características para o sucesso do casamento. Para cada três casamentos, um divórcio. 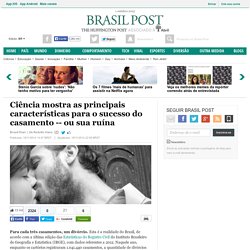 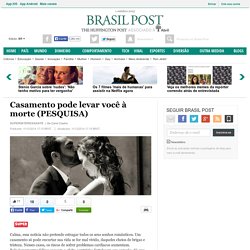