Emotional Manipulation. This Infographic Reveals the Secrets of the Happiest Couples. “One Abuse Script with Many Faces” We’ve been discussing gaslighting as an abuse tactic in two previous posts in response to this article by Yashar Ali who reassures us that we ladies are not crazy (thanks). 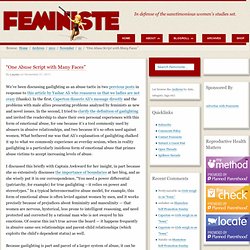 In the first, Caperton dissects Ali’s message directly and the problems with male allies presenting problems analyzed by feminists as new and novel issues. In the second, I tried to clarify the definition of gaslighting and invited the readership to share their own personal experiences with this form of emotional abuse, for one because it’s a tool commonly used by abusers in abusive relationships, and two because it’s so often used against women.

What bothered me was that Ali’s explanation of gaslighting chalked it up to what we commonly experience as everday sexism, when in reality gaslighting is a particularly insidious form of emotional abuse that primes abuse victims to accept increasing levels of abuse. Gaslighting can be physical or emotional. Ending the Toxic Relationship and Giving Yourself Time and Space to Find Yourself. Photo credit: AmyJanelle Some relationships are deeply damaging and unhealthy for the people within the relationship. 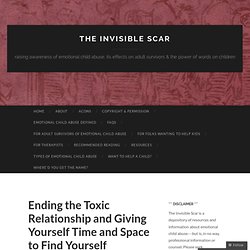 SociopathLife.Com. “That is not what I said” “Your crazy, that never happened” “are you sure? 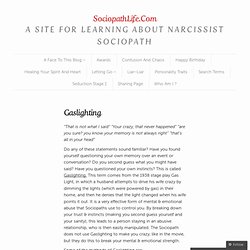 You know your memory is not always right” “that’s all in your head” Do any of these statements sound familiar? Have you found yourself questioning your own memory over an event or conversation? 6 Toxic Relationship Habits Most People Think Are Normal. There’s no class in high school on how to not be a shitty boyfriend or girlfriend. Sure, they teach us the biology of sex, the legality of marriage, and maybe we read a few obscure love stories from the 19th century on how not to be. But when it comes down to actually handling the nitty-gritty of relationships, we’re given no pointers… or worse, we’re given advice columns in women’s magazines. Yes, it’s trial-and-error from the get-go. And if you’re like most people, it’s been mostly error.

But part of the problem is that many unhealthy relationship habits are baked into our culture. A lot of the self-help literature out there isn’t helpful either (no, men and women are not from different planets, you over-generalizing prick). Toxic Relationships. Codependency: Loss of Self In Others. As a recovering codependent, one of my passions is working with other codependents because they are usually well-intentioned men and women who care deeply about others while never learning to care deeply about themselves, which is my history, too. 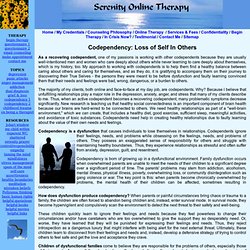 My approach to working with codependents is to help them find a healthy balance between caring about others and caring for themselves, and as they do, it is gratifying to accompany them on their journey to discovering their True Selves - the persons they were meant to be before dysfunction and faulty learning convinced them that their needs and feelings were bad, wrong, dangerous, or a burden to others. The majority of my clients, both online and face-to-face at my day job, are codependents. Why? Because I believe that unfulfilling relationships play a major role in the depression, anxiety, anger, and stress that many of my clients describe to me. Codependency is a dysfunction that causes individuals to lose themselves in relationships.

13 Signs Your Wife or Girlfriend is a Borderline or a Narcissist. My girlfriend / wife doesn’t have a personality disorder. 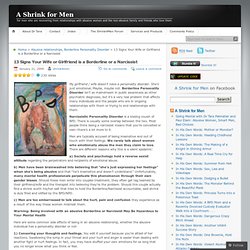 She’s just emotional. Maybe, maybe not. Borderline Personality Disorder isn’t as mainstream in public awareness as other psychiatric diagnoses, but it’s a very real problem that affects many individuals and the people who are in ongoing relationships with them or trying to end relationships with them. Narcissistic Personality Disorder is a kissing cousin of BPD. There is usually some overlap between the two. Men are typically accused of being insensitive and out of touch with their feelings. Coping With A Narcissist - Information Guide to Narcissism. What It Means To Be With a Narcissist and One Way of Coping About You It isn’t easy being you. 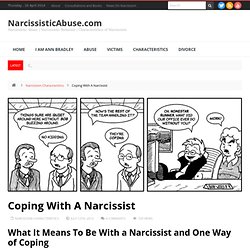 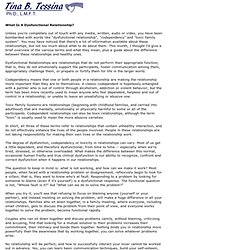 Unless you're completely out of touch with any media, written, audio or video, you have been bombarded with words like "dysfunctional relationship", "codependency" and "toxic family system". You may have noticed that there's a lot of information available about these relationships, but not too much about what to do about them. This month, I thought I'd give a brief overview of the various terms and what they mean, plus a guide about the difference between these relationships and healthy ones. 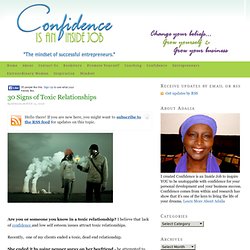 I believe that lack of confidence and low self esteem issues attract toxic relationships. Recently, one of my clients ended a toxic, dead end relationship. She ended it by using pepper spray on her boyfriend - he attempted to hold her hostage by grabbing her cell phone and blocking the exist from his room. This was not the first time he did this – the first time, she had her cell phone and called someone for help. For almost a year she refused to see the toxicity of this relationship and made excuses for her boyfriend’s unpredictable, possessive, infantile, aggressive, controlling behavior. She swears that she stayed because she loved him. Toxic Relationships and Navigating Them  Do you want to overcome shyness or anxiety and be confident and charismatic? 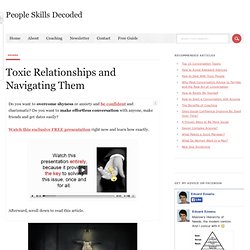 Do you want to make effortless conversation with anyone, make friends and get dates easily? Watch this exclusive FREE presentation right now and learn how exactly. Afterward, scroll down to read this article. Warning Signs of a Toxic Relationship - Yahoo! Voices Mobile. We may watch the foods that we consume in order to manage our weight and prevent disease and illness, but the health of our relationships impact our overall health as well. 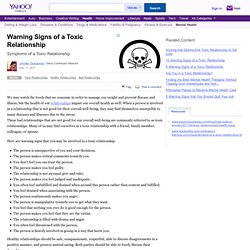 *TOXIC RELATIONSHIP* 11 Signs that YOU'RE in one and how to get OUT! Are you in an unhealthy toxic relationship and don’t know it? A toxic relationship is a unhealthy relationship characterized by negative behaviors on the part of the toxic partner that are emotionally, mentally and physically damaging to their partner. This is a very dysfunctional, poisonous and dangerous relationship to be in, it damages your self-esteem and drains your energy.

We risk our very being by staying in such a relationship there is no need for you to jeopardize your life or health for being in a toxic relationship. Many of us desire love and intimacy but find our way blocked by the fear of getting hurt, the worry of. Spousal or Partner Abuse - 15 Red Flags to Watch For - Yahoo! Voices Mobile. Introduction: As you enter a relationship with a new boyfriend, what are the red flags to alert you that you might be entering an abusive relationship? Here are 15 red flags to watch for. After my divorce was final, I felt bruised and hurt by my first husband's rejection after nearly eight years of marriage. Even though I had grown all I was capable of growing within the confines of the marriage two years prior, I was determined to make my marriage to him work.

After all, I did not believe in divorce. Sadly, he did not agree. I moved to a new city, but I could not shake the feeling that I needed to find his replacement rather quickly. Red Flag #1 or Warning #1 - Think twice before beginning a relationship when either of you, or both, are on the rebound. On New Year's Eve, I met the man I will call Mr. 25 Ways to Tell if Your Relationship is Toxic - Yahoo! Voices Mobile. Many people are in relationships that are unhealthy. However, when a person is in the middle of this relationship, it is often difficult to see how detrimental the relationship is to his or her self-esteem. Others may tell you that your partner is not "good for you" or that they can't understand "why you don't leave. " Your partner may be a good provider, a good father, and at times, loving and kind to you.

However, there are other times when you are left feeling alone, afraid, or upset and don't understand what is going on. Dr.