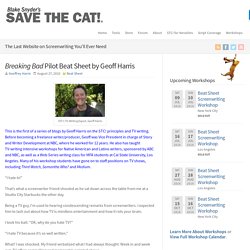 Principles and TV writing. Before becoming a freelance writer/producer, Geoff was Vice President in charge of Story and Writer Development at NBC, where he worked for 12 years. He also has taught TV-writing intensive workshops for Native American and Latino writers, sponsored by ABC and NBC, as well as a Web Series writing class for MFA students at Cal State University, Los Angeles.

Many of his workshop students have gone on to staff positions on TV shows, including Third Watch, Samantha Who? “I hate tv!” How to Build a Video Budget. If you’re doing video production because it’s a wonderful hobby and you’re okay with spending your own money to make your video creations, you probably don’t need to read any further. 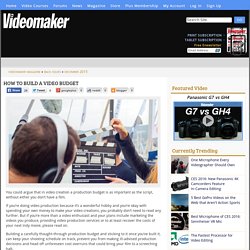 But if you’re more than a video enthusiast and your plans include marketing the videos you produce, providing video production services or to at least recover the costs of your next indy movie, please read on. Building a carefully thought-through production budget and sticking to it once you’ve built it, can keep your shooting schedule on track, prevent you from making ill-advised production decisions and head off unforeseen cost overruns that could bring your film to a screeching halt. Hitched for the Holidays’ Gary Goldstein. Faced with a changing industry landscape, TV vet Gary Goldstein remade his career in an unexpected way. 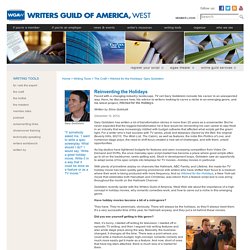 Here, he discusses how, his advice to writers looking to carve a niche in an emerging genre, and his latest project, Hitched for the Holidays. Written by Shira Gotshalk (December 14, 2012) Maximizing Your Success at the American Film Market by tanyakersey. Films For Action. Film offers us a powerful tool to raise awareness of important issues not covered by the mainstream news. 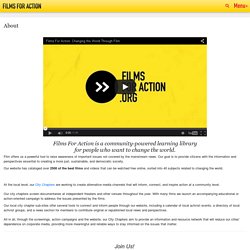 Our goal is to provide citizens with the information and perspectives essential to creating a more just, sustainable, and democratic society. Our website has cataloged over 2500 of the best films and videos that can be watched free online, sorted into 40 subjects related to changing the world. At the local level, our City Chapters are working to create alternative media channels that will inform, connect, and inspire action at a community level. Our city chapters screen documentaries at independent theaters and other venues throughout the year.

With many films we launch an accompanying educational or action-oriented campaign to address the issues presented by the films. Create an account on Films For Action and join our growing community of people who want to change the world! 10,000+ Site Members | 245,000+ Facebook Friends | 7,000 Twitter Friends As a member of the website you can: How it works. Project Spitfire Official Rules. Project Spitfire (the "Project") presents Members (as defined below) with the opportunity to have their documentary film “green lit” and to work with Tongal, Inc., the sponsor of the Project (“Tongal”), and Spitfire Pictures, LLC (“Spitfire”), the production company responsible for the documentaries "No Direction Home" and Oscar-winning "Undefeated," to create it. 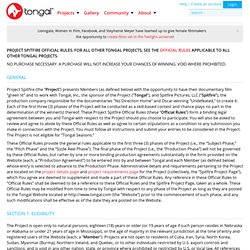 If You Missed It, Doc 'Kehinde Wiley: An Economy of Grace. By Tambay A. 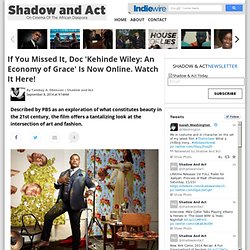 Obenson | Shadow and Act September 8, 2014 at 9:14AM Described by PBS as an exploration of what constitutes beauty in the 21st century, the film offers a tantalizing look at the intersection of art and fashion. It premiered on the evening of September 5 - last week Friday - on PBS, and now the intimate documentary portrait of one of this generation’s most accomplished artists - Kehinde Wiley - is now available to watch online. Known for his vibrant, larger-than-life reinterpretations of classical portraits featuring young African American men, the New York-based visual artist has turned the practice of portraiture on its head, and in the process, has taken the art world by storm.

5 Tips for Producing a Web Series on a Micro Budget. A more effective tactic would be to offer your cast and crew something they desire in exchange for a chance to work on your project. 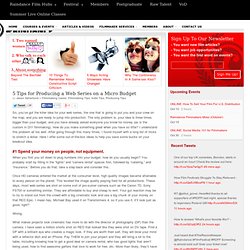 I recently shot Splinter Cell Extraction, a fan film based on the video game Splinter Cell. We needed a warehouse that we could control for several days. We didn’t have the budget to rent a space like this, and it was tempting to beg the owner (who I didn’t know) for a big favor. I ended up hearing about a model whose father owned a warehouse right by my office. By The Numbers: Budget Analysis of a Web Series. 1Executive Summary Web video may have started out with user-generated content at its core, but in today’s world there’s a new cast of players creating web videos, from the funny guy with a web cam to the big-budget studio. 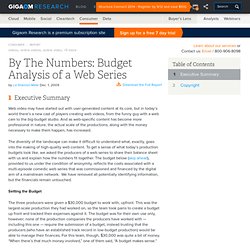 And as web-specific content has become more professional in nature, the actual scale of the productions, along with the money necessary to make them happen, has increased. Learn How to Make a Web Series in 10 Weeks. What does it really take to make a web series? 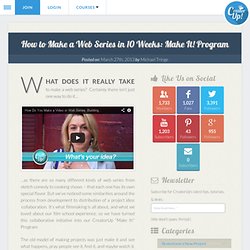 Certainly there isn’t just one way to do it… Leimert Park a Documentary Film. The Gentrification of Black Film. I refuse to see a film on the life of James Brown that is directed by the man who directed ‘The Help’. 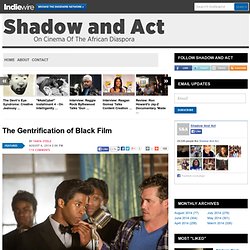 Yes, it is my loss. I accept that loss. I am sure Chadwick Boseman and the rest of the cast did an outstanding job. But, at some point, I have to register my disgust with the need for “Hollywood” to situate itself in the lives of Black Americans without giving a Black Director the opportunity to tell the story. MANENBERG - excerpt 2. Haitian Filmmakers. Last Poet In Harlem.

JLOVE - Join The Cause. Harlem International Film Festival » Submissions. Tales from the Kraka Tower: A hilarious new Web series that's like Awkward Black Girl for academics. Still from YouTube. A Massive List of Upcoming Grants All Filmmakers Should Know About. Oakley Anderson-Moore 02.11.14 @ 9:00AM Tags : britdoc, creativecapital, documentary, features, filmindependent, financing, grants, ifp, itvs, macarthurfoundation, narrative, screenwriting, sundanceinstitute. American Film Market. 10 Tips for Writing Loglines. Loglines are tricky things – distilling 120 pages of script into one sentence and imbuing it with the power to summarise, titillate and intrigue is a surprisingly difficult task. As a writer it can be hard to develop a good logline because you are invested equally in each part of your work – identifying the crucial story elements and leaving everything else out feels like you aren’t doing your script justice. Watch The Serpent and the Rainbow Online Free Putlocker.

100 Must-See African-American Films. The Cheap Investor. The Magazine of Independent Film. Steve Connell watch close. Hollywood Career Strategist. How I Built My Camera System: Duy Linh Tu. It can be very beneficial to utilize a camera support system when shooting video with a DSLR; however, it can be challenging to figure out what equipment to buy, and how elaborate of a rig you need.

We spoke to Duy Linh Tu about the compact rig that he uses for shooting documentaries with his Canon 5D Mark III, how his rig has gotten smaller as it has evolved, and his approach of recording audio directly into the camera. Does your role as a Professor and the Director of Digital Media at the Columbia University Graduate School of Journalism give you access to a lot of gear, and if so, how did this influence your rig? Besides being a professor and director of digital media, I'm also a full-time DP. Color Me Beautiful: A Dark Girl Reflects on "Dark Girls" The highly anticipated documentary, Dark Girls, made its debut on OWN Network last night. Coming Soon - A Breakout for Black Filmmakers. No Budget Film School. 8 Gadgets For Low-Budget Filmmaking at the National Association of Broadcasters. Blackmagicdesign Cinema Pocket Camera. The Decline Of Spike Lee: A Prisoner Of The Middle Class. Having seen Spike Lee’s RED HOOK SUMMER (2012) in its entirety I can finally identify three major flaws that comment upon the general decline in the dramatic quality and commercial impact of Spike Lee’s narrative films in recent years.

With Growing Resentment Of Oscar Campaigns, A Look Back At Mo'Nique's Controversial Choice. Suddenly, even though she was practically crucified in the mainstream press for not playing the Oscar campaign game (an Oscar she eventually won anyway), Mo'Nique's public decision may not seem so ridiculous as many felt it was at the time. As GoldDerby.com reports, there's a growing resentment of the Oscar campaign process by more and more Hollywood artists, who are "fed up with the parade of glad-handing that has come to define the fall-to-winter awards season" - the countless events, appearances, interviews, and receptions that are apparently expected from those who hope to make the nominations short lists, as well as win the coveted statue.

To wit, most recently, during the current awards season: Don Cheadle On The Five Stages of An Actor's Life + Prepping For Miles Davis Project. Dear Filmmakers... Invest In A Good First Trailer!