3-Iron. Plot[edit] Tae-suk (Jae Hee) is a loner who drives around on his motorbike, taping takeout menus over the keyholes of front doors and breaking into apartments where the menus have not been removed. 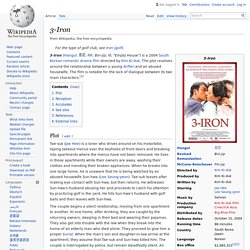 He lives in those apartments while their owners are away, washing their clothes and mending their broken appliances. When he breaks into one large home, he is unaware that he is being watched by an abused housewife Sun-hwa (Lee Seung-yeon). Tae-suk leaves after making eye contact with Sun-hwa, but then returns. He witnesses Sun-hwa's husband abusing her and proceeds to catch his attention by practicing golf in the yard. The couple begins a silent relationship, moving from one apartment to another. 21 TERRIFYING FILMS FROM THE 1920S THAT SHAPED THE HORROR GENRE. Horror has always been on the cutting edge of cinema—sometimes in more ways that one. 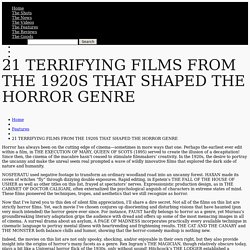 Perhaps the earliest ever edit within a film, in THE EXECUTION OF MARY, QUEEN OF SCOTS (1895) served to create the illusion of a decapitation! Since then, the cinema of the macabre hasn’t ceased to stimulate filmmakers’ creativity. In the 1920s, the desire to portray the uncanny and make the unreal seem real prompted a wave of wildly innovative films that explored the dark side of nature and humanity.

NOSFERATU used negative footage to transform an ordinary woodland road into an uncanny forest. HAXAN made its coven of witches “fly” through dizzying double exposures. Now that I’ve lured you to this den of silent film appreciation, I’ll share a dire secret. ROME-2033-RT-932x676.jpg (JPEG Image, 932 × 676 pixels) Twenty-Four by Thirty-Six - Teaser Trailer #2. Straw Dogs (1971 film) David Sumner, a timid American mathematician and basketball player, leaves the chaos of college anti-war protests to live with his young wife, Amy, in her hometown of Wakely, a fictional village in Cornwall, England. 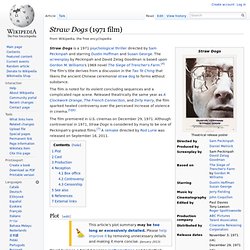 Almost immediately, there is tension between the couple as David becomes immersed in his academic work and differing ideas regarding the nature of their relationship come to light: David wants the traditional division of tasks, with the man earning wages, and the wife satisfying his needs in the kitchen and bed. Amy wants greater participation from David if she is going to accept such a role: she wants him to perform all the traditionally male tasks, like fixing the toaster, but also to involve himself in her community. Worth a look: Independent films 2014. Duck, You Sucker, Or You Will Blow Up by Edward A. Grainger. Rod Steiger, left, as Juan Miranda and James Coburn, right, as John H. 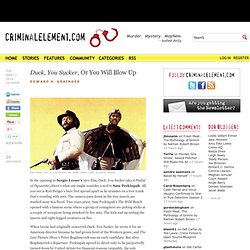 Mallory In the opening to Sergio Leone’s 1971 film, Duck, You Sucker (aka A Fistful of Dynamite),there’s what one might consider a nod to Sam Peckinpah. All you see is Rod Steiger’s bare feet spread apart as he urinates on a tree trunk that’s crawling with ants. The camera pans down as the tiny insects are washed away in a flood. Two years prior, Sam Peckinpah’s The Wild Bunch opened with a famous scene where a group of youngsters are poking sticks at a couple of scorpions being attacked by fire ants.

When Leone had originally conceived Duck, You Sucker, he wrote it for an American director because he had grown tired of the Western genre, and The Last Picture Show’s Peter Bogdanovich was an early candidate. In 1913 Mexico at the time of the revolution, Rod Steiger plays Juan Miranda who is chief bandit of a ragtag group that includes several of his sons. An overlooked movie but I hope for not too much longer. Hardware (film) A nomad scavenger treks through an irradiated wasteland and discovers a buried robot. 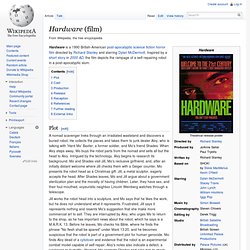 The Fall (2006 film) The Fall is a 2006 adventure fantasy film directed by Tarsem Singh, starring Lee Pace, Catinca Untaru, and Justine Waddell.[1] It is based on the screenplay of the 1981 Bulgarian film Yo Ho Ho by Valeri Petrov.[2] The film earned $3.2 million worldwide. 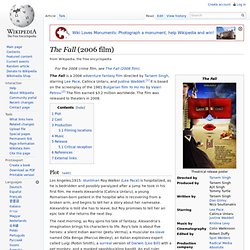 The film was released to theaters in 2008. Los Angeles,1915: stuntman Roy Walker (Lee Pace) is hospitalized, as he is bedridden and possibly paralyzed after a jump he took in his first film. He meets Alexandria (Catinca Untaru), a young Romanian-born patient in the hospital who is recovering from a broken arm, and begins to tell her a story about her namesake. Alexandria is told she has to leave, but Roy promises to tell her an epic tale if she returns the next day. The next morning, as Roy spins his tale of fantasy, Alexandria's imagination brings his characters to life. Alexandria vividly imagines her friends and people around her appearing as the characters in Roy's story.

Death Rides a Horse. Death Rides a Horse (aka Da uomo a uomo, or As Man to Man) is a 1967 spaghetti western directed by Giulio Petroni, written by Luciano Vincenzoni, and starring Lee Van Cleef and John Phillip Law.[1] Plot summary[edit] Bill (John Phillip Law), a boy whose father was killed and mother and sister were raped and murdered in front of him by a gang, sets out 15 years later to exact revenge, having used the time to become an expert marksman with a gun. 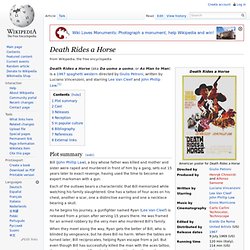 Each of the outlaws bears a characteristic that Bill memorized while watching his family slaughtered. The Devil's Backbone. The Devil's Backbone (Spanish: El espinazo del diablo) is a 2001 Spanish-Mexican gothic horror film directed by Guillermo del Toro, and written by del Toro, Antonio Trashorras and David Muñoz. 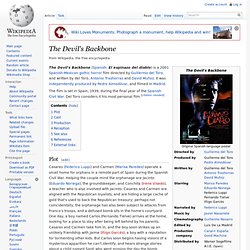 It was independently produced by Pedro Almodóvar, and filmed in Madrid. The film is set in Spain, 1939, during the final year of the Spanish Civil War. Del Toro considers it his most personal film. [citation needed] Plot[edit] Cast[edit] Thunderheart. The film was a co-production between the motion picture studios of TriStar Pictures, Tribeca Productions, and Waterhorse Productions. 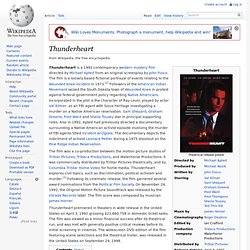 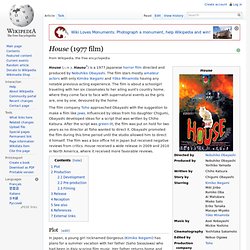 Is a 1977 Japanese horror film directed and produced by Nobuhiko Obayashi. The film stars mostly amateur actors with only Kimiko Ikegami and Yōko Minamida having any notable previous acting experience. See How An Anime Master Manipulated Space And Time. The 25 Oldest Looking Teenagers in Movie History. Our picks for the most unbelievable cinematic adolescents of all time. Beauty may be in the eye of the beholder, but in Hollywood, age is in the eye of the casting director. In the movies, playing a high schooler is less a matter of the actors’ real age than the filmmakers’ state of mind.

Who cares if you’re pushing 30 and married and you’ve got a couple kids? How do you look in trendy clothes? How are your sideburns? True, movies are fantasies. To catalogue the worst offenders, we decided to put together this list of the oldest looking teenagers in movie history. We were careful to disqualify anyone who wasn’t definitely playing a teenager. With those rules in mind, here’s our list. 25. Last year’s remake by the Coen Brothers really threw into relief just how old Kim Darby looks in the original “True Grit.” 24.

Come and See. Come and See (Russian: Иди и смотри, Idi i smotri; Belarusian: Ідзі і глядзі, Idzi i hlyadzi) is a 1985 Soviet war drama film directed by Elem Klimov about and occurring during the Nazi German occupation of the Byelorussian SSR. Aleksei Kravchenko and Olga Mironova star as the protagonists Flyora and Glasha.[2] The screenplay by Klimov and Ales Adamovich had to wait eight years for approval; the film was finally produced to commemorate the 40th anniversary of the Soviet victory in World War II, and was a large box-office hit, with 28,900,000 admissions in the Soviet Union alone. The film was selected as the Soviet entry for the Best Foreign Language Film at the 58th Academy Awards, but was not accepted as a nominee.[3] §Plot[edit] In 1943 two Belarusian boys are digging in a sand field looking for abandoned rifles in order to join the Soviet partisan forces.

Dödsmatchen (1989. The use of Light in Movies. Psychological thriller. Definition[edit] Literary devices and techniques[edit] Themes[edit] Many psychological thrillers have emerged over the past years, all in various media (film, literature, radio, etc.). Despite these very different forms of representation, general trends have appeared throughout the narratives. Some of these consistent themes include:[4] Examples[edit] Screenwriters and directors[edit] Video games[edit] 15 Over-Used Movie Poster Clichés. Stalker (1979 film) Stalker (Russian: Сталкер; IPA: [ˈstɑlkʲɪr]) is a 1979 art film directed by Andrei Tarkovsky, with a screenplay written by Boris and Arkady Strugatsky, loosely based on their novel Roadside Picnic. Solaris (1972 film) Psychologist Kris Kelvin (Donatas Banionis) spends his last day on Earth reflecting on his life while walking by a lake near his childhood home where his elderly father still resides.

Kelvin is about to embark on an interstellar journey to a space station orbiting the remote oceanic planet Solaris. After decades of study, the scientific mission at the space station has barely progressed and the original crew have been reduced to three members, Dr. Gibarian (Sos Sargsyan), a friend of Kelvin, Dr. Sartorius (Anatoli Solonitsyn) and Dr. Snaut (Jüri Järvet).