Review. The Hobbit: the Desolation of Smaug. 302 Found. LearnEnglishTeens. How to write E-mail. 3D or not 3D? That is the question. In the 20th century everything changed for cinema. 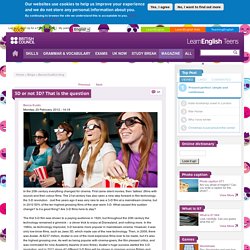 First came silent movies, then ‘talkies’ (films with sound) and then colour films. The 21st century has also seen a new step forward in film technology: the 3-D revolution. Just five years ago it was very rare to see a 3-D film at a mainstream cinema, but in 2010 50% of the ten highest grossing films of the year were 3-D. What caused this sudden change? Is it a good thing? The first 3-D film was shown to a paying audience in 1920, but throughout the 20th century the technology remained a gimmick – a clever trick to enjoy at Disneyland, and nothing more. 3-D films are obviously very popular.

However, what’s good for film studios isn’t always good for audiences. 3-D film tickets do cost more than normal cinema tickets, and you must decide if seeing a film in 3-D is worth the extra money. Film review: A Better Life. A Better Life, directed by Chris Weitz, is a powerful film set in East Los Angeles which depicts the lives of Carlos, a Mexican illegal immigrant, and Luis, his teenage son. 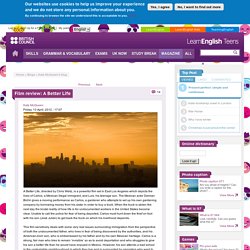 The Mexican actor Demian Bichir gives a moving performance as Carlos, a gardener who attempts to set up his own gardening company by borrowing money from his sister in order to buy a truck. When the truck is stolen the next day the brutal reality of how life is for undocumented workers in the United States become clear. Unable to call the police for fear of being deported, Carlos must hunt down the thief on foot with his son (José Julián) to get back the truck on which his livelihood depends. The Intouchables. During the last fortnight, Intouchables has taken France by storm – and by surprise! 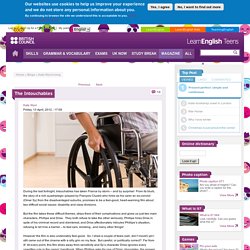 From its blurb, the story of a rich quadriplegic (played by François Cluzet) who hires as his carer an ex-convict (Omar Sy) from the disadvantaged suburbs, promises to be a feel-good, heart-warming film about two difficult social issues: disability and class divisions. But the film takes these difficult themes, strips them of their complications and gives us just two main characters, Phillipe and Driss. They both refuse to take the other seriously; Phillipe hires Driss in spite of his criminal record and disinterest, and Driss affectionately ridicules Phillipe’s situation, refusing to let it be a barrier – to fast cars, smoking...and many other things! The Woman in Black - Film review. The first thing you will notice when you watch the film (which is out in the cinemas at the moment) is the guy with dark hair and blue eyes that will probably seem quite familiar. 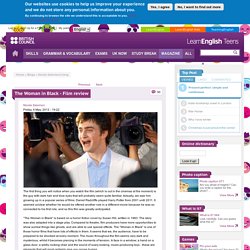 Actually, we saw him growing up in a popular series of films: Daniel Radcliffe played Harry Potter from 2001 until 2011. It seemed unclear whether he would be offered another role in a different movie because he was so connected to his first role, and so this film was greatly anticipated. “The Woman in Black” is based on a horror fiction novel by Susan Hill, written in 1983. The story was also adapted into a stage play. Compared to theatre, film producers have more opportunities to show surreal things like ghosts, and are able to use special effects. The plot of the film is a rather classic horror story: Arthur Kipps, a young lawyer and widowed father from London (Daniel Radcliffe), is sent to a little town where nobody, apart from one family, will accept him. The Impossible - a Film Review.

Don’t worry – I’m not about to reveal the ending! 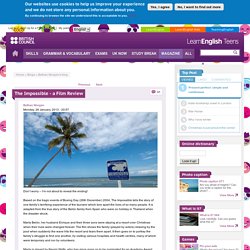 Based on the tragic events of Boxing Day (26th December) 2004, The Impossible tells the story of one family’s terrifying experience of the tsunami which tore apart the lives of so many people. It is adapted from the true story of the Belón family from Spain who were on holiday in Thailand when the disaster struck. María Belón, her husband Enrique and their three sons were staying at a resort over Christmas when their lives were changed forever. The film shows the family (played by actors) relaxing by the pool when suddenly the wave hits the resort and tears them apart. It then goes on to portray the family’s struggle to find one another, by visiting various hospitals and health centres, many of which were temporary and run by volunteers.

María is played by Naomi Watts, who has since gone on to be nominated for an Academy Award based on her performance. From book to film. Like many people, I get an initial feeling of dread when I hear that a book I like has been turned into a film. 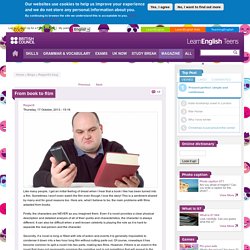 Sometimes I won't even watch the film even though I love the story! This is a sentiment shared by many and for good reasons too. Here are, what I believe to be, the main problems with films adapted from books. Firstly, the characters are NEVER as you imagined them. Even if a novel provides a clear physical description and detailed analysis of all of their quirks and characteristics, the character is always different. Secondly, if a novel is long or filled with lots of action and events it is generally impossible to condense it down into a two hour long film without cutting parts out. Thirdly, filmmakers like to use a bit of artistic license, and can sometimes change a storyline completely. Film review. Write a Book Review With Rodman Philbrick.