Artists' Moving Image. Kinet. "A Love of UIQ": Félix Gutattari's Unfilmed Script on Notebook. “There will soon be nothing more than self-communicating zombies, whose lone umbilical relay will be their own feedback image – electronic avatars of dead shadows perpetually retelling their own story.” 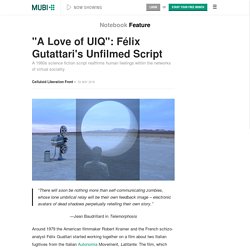 —Jean Baudrillard in Telemorphosis Around 1979 the American filmmaker Robert Kramer and the French schizo-analyst Félix Guattari started working together on a film about two Italian fugitives from the Italian Autonomia Movement, Latitante. The film, which was to star Pier Paolo Pasolini's regular actress Laura Betti, was meant to be a sort of first person collective reflection on the finitude and fragility of the body, “opposing the enormous weight of things-as-they-are, systematically defined by vast power.” A film about the intimacy of resistance. Guattari's narrative somehow bridges these two currents, borrowing the resolve from the former and the conceptual tools from the latter. Curzon Cinemas. Outsidefilm.org. Senses of Cinema film journal. MENTAL IMAGE. DIAMOND VARIATIONS. London's Screen Archives. Moon In The Gutter: A Moon in the Gutter Q&A with Writer and Director Daniel Bird.

Happy New Year! I hope everyone reading here had a great 2010 and I hope 2011 turns out even better. Thanks so much for all the support here and I am going to try my best to keep rocking throughout this new year. I am thrilled to kick-start 2011 with this new Q&A with one of my favorite writers and film historians on the planet, Mr. Daniel Bird. Fans of Andrzej Zulawski will, no doubt, hold Daniel in the same high-esteem I do, due to his tireless and inspired work with the great Polish director. ***Just one of the amazing Mondo Vision Zulawski DVDs that Daniel has been actively involved with*** I first discovered Daniel's great writing in the pages of Eyeball and Necronomicon back in the mid-nineties and I have followed his work since. Moon in the Gutter: First up, can you tell us a bit about your background and where you are from? 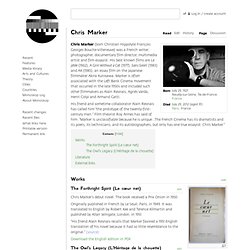 His best known films are La jetée (1962), A Grin Without a Cat (1977), Sans Soleil (1983) and AK (1985), an essay film on the Japanese filmmaker Akira Kurosawa. Marker is often associated with the Left Bank Cinema movement that occurred in the late 1950s and included such other filmmakers as Alain Resnais, Agnès Varda, Henri Colpi and Armand Gatti. His friend and sometime collaborator Alain Resnais has called him "the prototype of the twenty-first-century man. " Film theorist Roy Armes has said of him: "Marker is unclassifiable because he is unique...The French Cinema has its dramatists and its poets, its technicians, and its autobiographers, but only has one true essayist: Chris Marker. 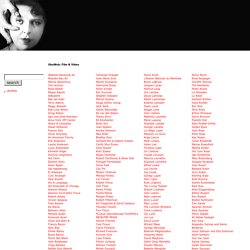 All copyrights belong to the artists. About UbuWeb Film & Video UbuWeb is pleased to present thousands of avant-garde films & videos for your viewing pleasure. However, it is important to us that you realize that what you will see is in no way comparable to the experience of seeing these gems as they were intended to be seen: in a dark room, on a large screen, with a good sound system and, most importantly, with a roomful of warm, like-minded bodies. However, we realize that the real thing isn't very easy to get to. We realize that the films we are presenting are of poor quality. HATE. Amanita (1974) Film by Vic Atkinson, who has proven that to make a dope movie, all you need is a damp forest of fungi and Chappell’s TVMusic 101-104 on wax. 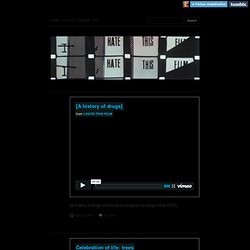 Throw in a few bugs and dead leaves for added ambience, and you’ve got yourself an instant classic. We were able to identify some of the music used in the film, first thanks to a fortuitous discovery on the now defunct Fourth Wave youtube channel of library music uploads and more recently while browsing the virtual stacks over at (Ad Lib).

After several months of fruitless research, however, we’ve concluded that trying to identify library music is kind of like trying to identify mushrooms—at a certain point you’re better off asking an expert. Now is your time to fill in the blanks. 0:36 [sounds a bit like Cosmic sounds no. 6 by Georges Teperino, mixed with something else, but we suspect it may be a different track entirely]