Unaoil bribery scandal: The oil, the powerful and the multinationals. Last updated 02:42, March 31 2016. 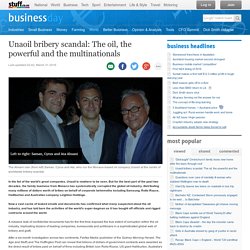 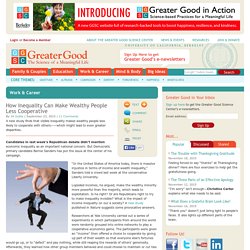 But Democratic primary candidate Bernie Sanders has put the issue at the center of his campaign. “In the United States of America today, there is massive injustice in terms of income and wealth inequality,” Sanders told a crowd last week at the conservative Liberty University. Lopsided incomes, he argued, make the wealthy minority more powerful than the majority, which leads to exploitation. Is he right? Or are Republicans right to try to make inequality invisible? Researchers at Yale University carried out a series of experiments in which participants from around the world were randomly grouped into online networks to play a cooperative economics game. Wealth Inequality Proves Rich Exploit "Broken" US System. New academic research published this summer offers empirical proof that the growing wealth inequality problem in the United States is serious, and, most importantly, could not have happened if financial markets were truly fair. 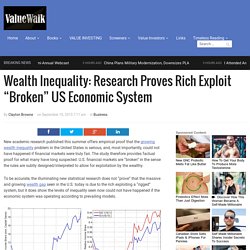 The study therefore provides factual proof for what many have long suspected: U.S. financial markets are “broken” in the sense the rules are subtly designed/interpreted to allow for exploitation by the wealthy. Inequality Gets Worse When Poverty Is Visible. Many commentators have pointed to disturbances in Ferguson and elsewhere over the past year as proof that economic inequality leads to tensions and even violence. 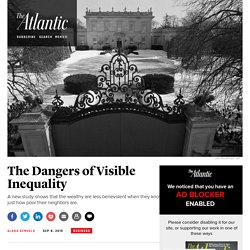 But new research out from Yale University suggests that it’s not the presence of inequality that causes problems, but rather the visibility of that inequality. “Making wealth visible was a very corrosive force. It resulted in the rich exploiting the poor,” said Nicholas A. Christakis, the co-director of Yale Institute for Network Science and one of the senior authors of the study. When wealthy people find out that their neighbors don’t have the resources they do, researchers find, they’re less likely to help them, or anyone else. The study provided a deep dive into human behavior and wealth via software that allowed researchers to create virtual temporary societies over which they had “God-like” control, Christakis told me. In this instance, researchers grouped together subjects and assigned them arbitrary units of wealth. 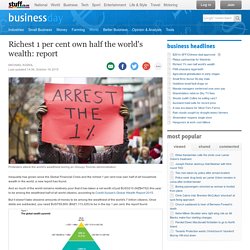 Inequality has grown since the Global Financial Crisis and the richest 1 per cent now own half of all household wealth in the world, a new report has found. And so much of the world remains relatively poor that it has taken a net worth of just $US3210 (NZ$4702) this year to be among the wealthiest half of all world citizens, according to Credit Suisse's Global Wealth Report 2015. But it doesn't take obscene amounts of money to be among the wealthiest of the world's 7 billion citizens. Once debts are subtracted, you need $US759,900 ($NZ1,113,325) to be in the top 1 per cent, the report found. How McDonalds and Burger King Targeted Black Consumers in the 1970s.

In the 1970s, something special began happening in American advertising. 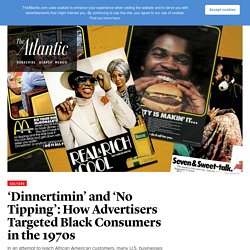 At the tail end of the civil-rights movement, the industry began to move away from its decades-long habit of portraying African Americans almost exclusively in positions of servitude or inferiority, as props in ads aimed at white audiences. By the 1970s, companies such as McDonald’s and Coca-Cola began increasing the racial diversity depicted in their campaigns. In 1974, Jello became one of the first big companies to hire an African American spokesperson—Bill Cosby. The Pope on Capitalism. Pfizer to pay &#163;50m after deaths of Nigerian children in drug trial experiment - Africa - World - The Independent. Mr Etigwe had chosen Mr Altschuler because, back in 1979, the Connecticut lawyer had successfully defended a friend of the Nigerian. 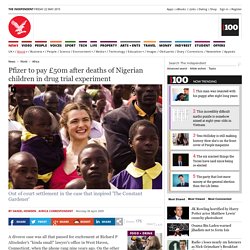 The unlikely pair were about to embark on a marathon journey into the world of "big pharma". Nine years on and their efforts have finally been rewarded with a reported $75m (£50m) settlement, the terms of which are likely to be released this week. Thank You for Smoking Learning Politics. Consumer Ethics in Thank you for smoking. Tobacco and Drugs. Cigarette smoking naturally turns many of us into frothing moralists. 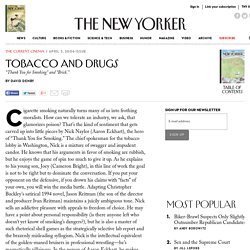 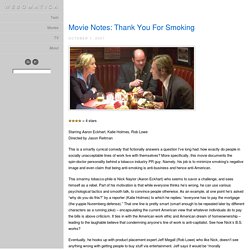 What The Dallas Buyer's Club Tells Us About Crony Capitalism. Waiting to Inhale: 'Thank You for Smoking' Few industries are more demonized than Big Tobacco. 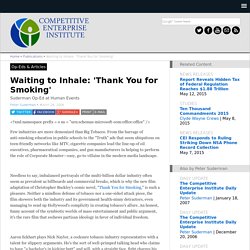 From the barrage of anti-smoking education in public schools to the "Truth" ads that seem ubiquitous on teen-friendly networks like MTV, cigarette companies lead the line-up of oil executives, pharmaceutical companies, and gun manufacturers in helping to perform the role of Corporate Monster—easy, go-to villains in the modern media landscape. Needless to say, imbalanced portrayals of the multi-billion dollar industry often seem as prevalent as billboards and commercial breaks, which is why the new film adaptation of Christopher Buckley's comic novel, "Thank You for Smoking," is such a pleasure. Neither a mindless defense of tobacco nor a one-sided attack piece, the film skewers both the industry and its government health-ninny detractors, even managing to send up Hollywood's complicity in creating tobacco's allure.

Thank You For Smoking – Good talking, bad ethics. The film Thank You for Smoking illuminates the issues of disassociating business and ethics with more than a hint of dark comedy. Nick Naylor (Aaron Eckhart) is a man with a job that requires, as he puts it, “moral flexibility.” The rise of the conscious consumer - Element magazine. The dizzying choices we face whenever we stand in front of a supermarket shelf or a rack of clothing in a retail store represent an opportunity to do some good. For there, perhaps down at the end of the row, is the Fairtrade section, or the organic section which, respectively, mean the grower in the developing world gets a decent deal for their produce, and the land on which the organic plant is grown is not doused in toxic pesticides.

Almost every conceivable product category and service now has a 'green' alternative. Eleanor Catton on Literature and Elitism. Conscious Consumerism is Catching On in New Zealand. Is it coincidence or might there be a trend emerging here? In the space of 24 hours, I’ve discovered two mainstream media that are highlighting “conscious consumers” in New Zealand. 1. The bi-monthly money magazine Good which boasts a circulation of 9,341; over 15,900 unique users per month; and 2057 active monthly Facebook users describes itself as follows: Good inspires women to create a wholesome, healthy life for themselves, their children and future generations.

Talks to watch instead of shopping. Michael Norton: How to buy happiness. Ethical consumerism. Marque. Branding and design agency. Auckland New Zealand. “Oh my god that top looks amazing on you! Where did you get it?” “I know! Isn’t it amazing. A lesson in consumerism from a German. Last updated 11:26 06/03/2012. Shelley Bridgeman: Help! I'm trapped by consumerism. If it sometimes feels as if we spend our entire lives in the pursuit of either earning money or spending money, there's a good reason: it's very close to the truth. Our addiction to possessions means we have little time to just be. Paul Piff: Does money make you mean? The true story of how multinational drug companies took liberties with African lives - Science - News - The Independent. Nobody knows what caused Anas' pain but suspicion has fallen on Big Pharma. The Horrific Truths Behind the Film "Puncture", Pt. I.

‘Injustice’ Blu-ray Review. ‘Injustice’ Blu-ray Review Occasionally, films are delayed not because they are poorly made or don’t have broad appeal…but because they are almost impossible to market. Frequently, you will see films which have sat on the shelves for years, finally see the light of day when a writer, director, or actor hits it big, suddenly providing a new commercial angle. If you are in stores this week and stumble upon a film titled in Injustice, and wonder why a film starring Captain America slipped past you in theaters, turns out…it didn’t. Mises Institute. “Dallas Buyers Club’s” narrow view of the AIDS crisis. Pills, Politics, and Movie Magic. Dallas Buyers Club-inspired “right to try” laws: Good movies don’t make good policy. How the Oscar-Winning Libertarian Favorite 'Dallas Buyers Club' Exposes the FDA. A drug expert on Dallas Buyers Club. Hollywood and critique of American materialism. As Consumerism Spreads The Earth Suffers.