Highest Rated Feature Films Released 1930 to 1980 With User Rating Between 8.0 And 10 and At Least 1,500 Votes. Video Junkie Strikes Back from Beyond the Grave. Stomp Tokyo - Illuminating The Dark Heart Of Video. Spoilers! Home Page. Anyclip - Any Moment, from Any Film. Top 250 directors by IMDB rating - a list by komutanucantekme. Directors with multiple movies in IMDB top 250 (as directors) - a list by catojune-1. YourOscars.com. Documentaries to see before you die. MOVIECLIPS: Movie Trailers, Previews, Clips of Old, New & Upcoming Films. 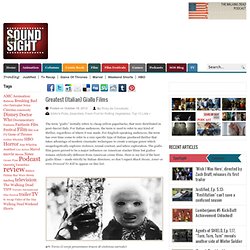 For Italian audiences, the term is used to refer to any kind of thriller, regardless of where it was made. For English-speaking audiences, the term has over time come to refer to a very specific type of Italian-produced thriller that takes advantage of modern cinematic techniques to create a unique genre which unapologetically explores violence, sexual content, and taboo exploration. The giallo film genre proved to be a major influence on American slasher films but giallos remain stylistically different from American crime films.

Here is my list of the best giallo films – made strictly by Italian directors; so don’t expect Black Swan, Amer or even Dressed To Kill to appear on this list. Movie Deaths Database, the best and worst Hollywood Homicides *:-) - Movie Deaths Database. Cult Movies, Movie Reviews, Downloads. The List Thus Far – 366 Weird Movies. Here is an alphabetical listing of all the movies (so far) that have been certified as among the 366 weirdest ever made, along with links to films reviewed in capsule form only. 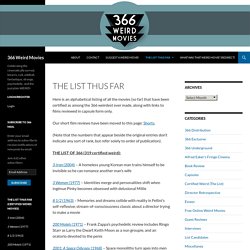 Our short film reviews have been moved to this page: Shorts. (Note that the numbers that appear beside the original entries don’t indicate any sort of rank, but refer solely to order of publication). THE LIST OF 366 (319 certified weird): 3-Iron (2004) – A homeless young Korean man trains himself to be invisible so he can romance another man’s wife 3 Women (1977) – Identities merge and personalities shift when ingénue Pinky becomes obsessed with delusional Millie 8 1/2 (1963) – Memories and dreams collide with reality in Fellini’s self-reflexive, stream-of-consciousness classic about a director trying to make a movie 200 Motels (1971) – Frank Zappa’s psychedelic review includes Ringo Starr as Larry the Dwarf, Keith Moon as a nun groupie, and an oratorio devoted to the penis The 5,000 Fingers of Dr. The Abominable Dr. Cool Ass Cinema: Reel Bad Cinema. THE CYCLOPS 1957James Craig (Russ Bradford), Gloria Talbott (Susan Winter), Lon Chaney (Martin Melville), Tom Drake (Lee Brand), Duncan Parkin (Bruce Barton/The Cyclops) Directed by Bert I. 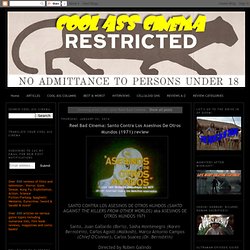 Gordon The Short Version: B.I.G.'s bad, bland 'B' flick is a slight step up from his first gig in 1955 directing giant lizards attacking uninterested humans sharing the screen via bad matte jobs. At least here, there's a snarling, rabid Chaney Jr. to keep your eye on with his despicable performance that's more monstrous than the galley of giggle-worthy monstrosities trotted out in the film. The special effects (and they are certainly "special") are the usual melange of "ghost" critters that crop up in Gordon's flicks. Susan Winter charts a plane and hires a few guides to fly into forbidden territory in Central Mexico to find her missing fiancee who disappeared there three years earlier. Jockeying for screen stupidity, the dialog contains a few valuable gem stones as well. THE CY-WHOOPS! They Shoot Pictures, Don't They? 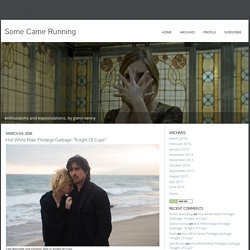 A couple of months, or weeks, or something, ago—my sense of time grows simultaneously more compressed and expanded as I grow older—someone on social media asked me where I ranked Bond movie X, and it reminded me that a few years back I labored somewhat mightily for my then-freelance-client, an entity called MSN Movies, on a lengthy piece in which I ranked the Bond pictures. That piece, published in annoying multi-click "gallery" form, has been purged from what is left of the MSN website, along with pretty much everything else I did for it.

Fortunately, or unfortunately, I've been keeping my original submitted versions of much if not all of my work for my freelance clients backed up. So I thought, well, now that Spectre's coming out, everybody else is ranking the Bond films, why shouldn't I get some of that Secret Agent Traffic? It’s the 50th anniversary…not of James Bond himself, who was invented by author Ian Fleming in 1953. 26) "Octopussy" (1983) Trailers From Hell.