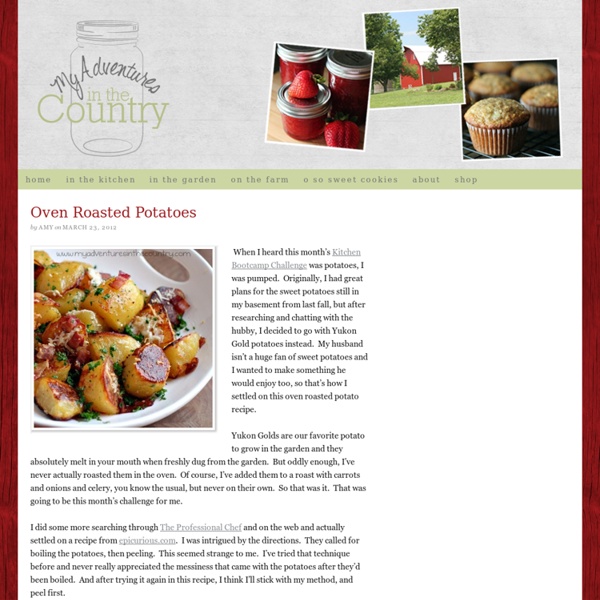 When I heard this month’s Kitchen Bootcamp Challenge was potatoes, I was pumped. Originally, I had great plans for the sweet potatoes still in my basement from last fall, but after researching and chatting with the hubby, I decided to go with Yukon Gold potatoes instead. My husband isn’t a huge fan of sweet potatoes and I wanted to make something he would enjoy too, so that’s how I settled on this oven roasted potato recipe. Yukon Golds are our favorite potato to grow in the garden and they absolutely melt in your mouth when freshly dug from the garden. But oddly enough, I’ve never actually roasted them in the oven. Of course, I’ve added them to a roast with carrots and onions and celery, you know the usual, but never on their own. I did some more searching through The Professional Chef and on the web and actually settled on a recipe from epicurious.com. Notes:The above link to The Professional Chef is an amazon affiliate link. You Might Also Like:

gooseberry mooseberry: Shrimp and Noodle Salad It's been hot. We've had an almost unbearable heatwave last week. And once again cold dishes and salads are my friends. Truth is, I don't remember much of the last month and a half of summer. Roasted Garlic Fingerling Potatoes in Thyme and Butter Fingerling potatoes are a small (probably the smallest) variety of potatoes. They have a very cute, narrow shape. The flesh is firm and yellow. Make the Tamales (III) Make the Tamales Hot Tamale Ingredients | Cook Tamale Meat | Make Tamales OK, you gathered the equipment, you went shopping with the My Hot Tamale shopping list, you cooked the meat, and you saved the broth. You are now ready to become part of an elite group of cooks who have the knowledge, the tools, and the talent to make tamales. Now, for those of you who did not follow the part II instructions which clearly said to save the meat broth (you know who you are). . . your tamales are not going to taste as good as the people who did follow the instructions, and did save the broth. You will see that the instructions were clearly marked In Color to help you remember.

{Food Dish} Cookie Recipe Contest Winner + Recipe Introducing the winner of our first ever best cookie recipe contest: Lemon Crinkle Cookies. They're probably the best cookie we've ever tasted - absolutely delicious. If you're coming to us from Pinterest, welcome! Make sure to check out some of our other contest-winning recipes: Best Dessert Bar: Super Yummy Raspberry Cheesecake Bars Chicken Enchiladas aka the best enchiladas ever! Thank you so much to Laura, at Tide and Thyme, for introducing me to this recipe. Seriously - they were so so good I can't even tell you. ** Roasted Potatoes with Red Peppers, Garlic, and Bacon Roasting potatoes and veggies is one of my favorite ways to cook them, aside from grilling. The flavors gets concentrated and the outside gets crispy, just the thought of it makes my mouth water! I am so happy that I finally learned to love vegetables.

Perfect Pulled Pork - Slow Roasted, Seasoned & Sa-vor-y!!! Remember last week when we were talking about company recipes? This is one of those recipes. I’ll never forget the first time I had this *perfect* pulled pork. Pepper & Corn Pies I really should do something about this puff pastry addiction of mine. But it’s so tasty! And easy! Salsa roja (roasted red salsa) « One Particular Kitchen I eat a lot of salsa. A LOT. I am rather notorious for this, in fact. My friend’s boyfriend once innocently asked if I had anything he could snack on — maybe some chips and salsa? Rosemary-Roasted New Potatoes Recipe Yunhee Kim Ingredients 1 (1-pound, 4-ounce) package refrigerated red potato wedges (such as Simply Potatoes) 2 tablespoons chopped fresh rosemary 3 garlic cloves, crushed 1 tablespoon olive oil 1/2 teaspoon onion powder 1/4 teaspoon salt 1/4 teaspoon pepper

Naan Recipe: If You Can Make Pancakes, You Can Make Naan Naan is one of my favorite components of an Indian meal. Sometimes when I go to an Indian buffet, I’ll hit the buffet one last time for naan only so that it is the last flavor in my mouth when I walk out the door. What is Naan? Naan is an Indian bread that is similar to pita, but so much better (don’t even try to debate it with me)! It is traditionally made in a tandoor (a clay oven), but I made this naan recipe in a cast iron skillet. Why Did I Make a Naan Recipe?

Fast & Easy Cinnamon Rolls {gluten free} + Giveaway! Random thoughts about me and my life part II: 1. Remember my first random thoughts list? Well, turns out those cold sores weren’t cold sores at all. No, sir. Parmesan Roasted Potatoes Recipe Ok fine. I’m officially ready to make the transition to fall. And I thought, what better way to do it than with my all time favorite Parmesan Roasted Potatoes! Cinnamon Toast Rolls - Circle B Kitchen The USDA released its new food pyramid the other day (which is actually a plate now instead of a pyramid), and I am sorely disappointed to report that cinnamon rolls did not appear anywhere on that plate. I think by now most of us know what should be on our dinner plate in terms of healthy, well-rounded nutrient-laden meals, but it is my considered opinion that our breakfast plate should include cinnamon rolls now and then. And not just any cinnamon roll, mind you, but how ‘bout a homemade cinnamon roll hybrid that is a cross between a cinnamon roll and cinnamon toast, is super easy to make and gosh darn delicious.

NTS: 40 minutes was too long for baby russet potatoes. Probably better to cook for 20 minutes then add the bacon and other ingredients. by sayanee Jun 21