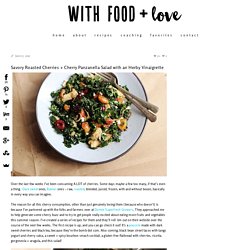 Some days maybe a few too many, if that’s even a thing. Dark sweet ones, Rainier ones – raw, roasted, blended, juiced, frozen, with and without booze, basically in every way you can imagine. Baked Plantain Fries with Garlic Avocado Dipping Sauce. I previously eluded to the fact that I was starting an Autoimmune / Leaky Gut Protocol on Monday of last week and that I would a some point fill you all in on more details. 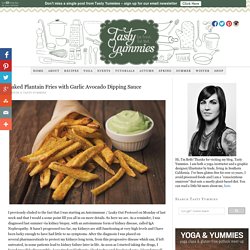 So here we are. As a reminder, I was diagnosed last summer via kidney biopsy, with an autoimmune form of kidney disease, called IgA Nephropathy. It hasn’t progressed too far, my kidneys are still functioning at very high levels and I have been lucky enough to have had little to no symptoms. After the diagnosis I was placed on several pharmaceuticals to protect my kidneys long term, from this progressive disease which can, if left untreated, in some patients lead to kidney failure later in life. As soon as I started taking the drugs, I found myself feeling terrible. My plan is to follow this Autoimmune Protocol (AIP) for a minimum of 30 days. For me, after just the first 7 days I have already noticed marked improvement. Buttered Spinach from at 1840s Farmwife's Journal — Nourished Kitchen. Yotam Ottolenghi & Sami Tamimi's Basic Hummus recipe on Food52.com. 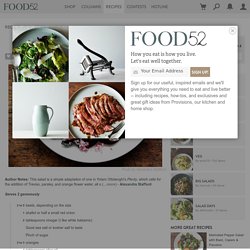 Find your friends who are already on Food52, and invite others who aren't to join. Let's GoLearn more Join Our Community Follow amazing home cooks. Collect recipes and articles. Sign Up ♥ 69  Save ▴ If you like it, save it! Save and organize all of the stuff you love in one place. Got it! If you like something… Click the heart, it's called favoriting. Roasted Onion Salad with Arugula and Walnut Salsa recipe on Food52.com. Roasted Butternut Squash with Sweet Spices, Lime, and Green Chile recipe on Food52.com. Portobello Mushrooms with Pearled Barley and Preserved Lemon recipe on Food52.com. Sweet Potatoes with Orange Bitters recipe on Food52.com. Hasselback Garlic and Herb Baby Potatoes - taste love and nourish. I spent some time visiting with my Mom a few weeks ago. 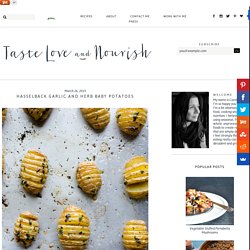 We only get to see each other a few times a year, so when we do, it’s really special. I miss her dearly. She’s had some serious health issues over the years, but no matter what, she never complains. Somehow, she still manages to maintain her independence and be the rock that makes all of us stronger. My Mom lost use of her hands several years ago and has worked diligently to regain her strength. Light artichoke stew. Simple Roasted Spaghetti Squash Recipe Recipe. Advertisement No Thanks Keep In Touch With MarthaStewart.com Sign up and we'll send inspiration straight to you. 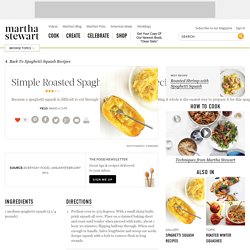 Martha Stewart takes your privacy seriously. To learn more, please read our Privacy Policy. Chicken tortillas lintel & spinach soup. Food - Recipes : Globe artichoke with Dijon mustard. Pizza Stuffed Portobello Mushrooms to Feed a Child and Nourish a Mind - foodi... There are so many reasons to eat well in this world. 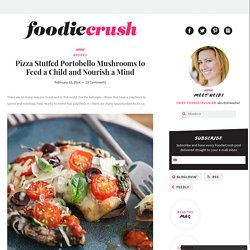 For the fortunate—those that have a paycheck to spend and nutritious food nearby to invest that paycheck in—there are many opportunities to do so. But for some life doesn’t work that way. There isn’t a paycheck. Sometimes there isn’t even a store. And others to provide for you? For adults in this situation it can become a circular battle that just keeps spinning out of control. But what about the children? Today I’m asking that you join me in making a change in the lives of those that go hungry. Two-potato latkes with smoky eggplant relish, spiced persimmon-apple sauce + sour cream. My mom has always said that we, the Chinese people, have an unspoken kinship with Jewish folks — insofar as “where Jewish people have guilt, Chinese people have shame.” 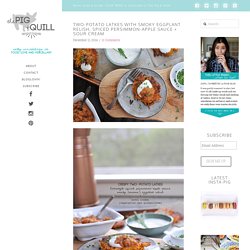 That, and we both love to eat. Thirty seconds ago, I shared this theory with my Jewish friend, Randi (we’re sitting on her sofa, re-watching the latest episode of Parenthood — because apparently we gluttons for punishment also share a passion for fug-faced sobbing) and she laughed. And then she agreed. Stuffed squash - calivintage. The weather is finally cooling off around these parts, bringing with it the opportunity to warm up the kitchen with all sorts of autumnal delights. my sister came over earlier in the week with a big butternut squash all ready to bake, so we whipped up a tasty stuffing to go with it. even though it’s a pretty simple recipe, it certainly isn’t short on flavor. butternut squash stuffed with wild rice and brussels sprouts 1 large butternut squash1/2 an onion2 cups uncooked chard1 cup cooked wild rice2 cup of cooked brussel sprouts (cut in half)2 tbsp roughly cut craisins1 tbsp slivered almontssalt and pepper to tasteenough olive oil to coat squash/ sprouts/ pan to saute onions. 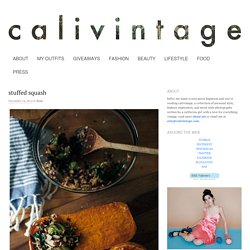 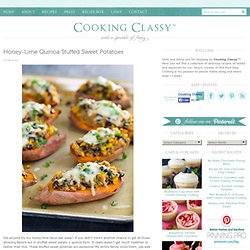 If you didn’t here’s another chance to get all those amazing flavors but in stuffed sweet potato + quinoa form. It really doesn’t get much healthier or tastier than this. These stuffed sweet potatoes are awesome! My entire family loved them, yes kids and meat loving husband included. Chargrilled Rosemary Endive Salad recipe on Food52.com. Food - Recipes : Braised fennel with butter and parmesan. 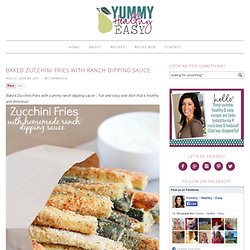 So I apologize for being sort of a lazy blogger lately…but things blew UP this weekend. Friday night, my hubby called me and said his stomach had been hurting all day. Not sure if you remember, but a few months ago, I ended up taking him to the ER due to severe stomach pains. That time the pains lasted a good 8+ hours and then disappeared. But when my guy says it hurts, he’s not messing around. Anyway, the pain escalated from about 5pm to 11pm and he started vomiting this green bile stuff (all Exorcist-like) and I knew I had to take him in to see someone. I couldn’t believe the pain he was in. Luckily the hospital was able to get him in to get an IV pretty quick (fyi, found out he has a heart rate of 41.

They wheeled him into an exam room (where he threw up again) and then covered him in blankets. I was relieved to know what it was but freaked out too! Basically, he’s crazy. Smashed Lemon Potatoes. Side dishes can make a good meal great. They are the supporting actors to a well-prepared piece of meat, which, if performing well, can hog the spotlight. But paying attention to what best supports the star can turn a meal from B-grade to award winning. It’s that time of year when side dishes become more than an after thought. Thanksgiving and Christmas provide a great excuse to focus on all parts of the meal. If you’ve already started thinking about your festive menus, I highly recommend including a plate of Smashed Lemon Potatoes. Food - Recipes : Pancakes with Parma ham and asparagus. Roast sweet potatoes & mustard mayonnaise.

Stuffed Mushrooms crumble. Food - Recipes : Fiery red rice salad. Healthy Green Kitchen Baked Endive with Anchovies and Thyme. Portobello Mushroom + Avocado Winter Rolls with Thai Peanut Sauce. Believe it or not, for my whole life, up until a couple years ago, I loathed mushrooms. Food - Recipes : Cauliflower as couscous with kale and feta spiced fritters and a tomato and ginger chutney.