Top Iron-Rich Foods List. Why do I need to register or sign in for WebMD to save? 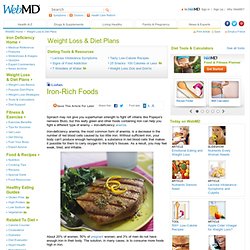 We will provide you with a dropdown of all your saved articles when you are registered and signed in. Spinach may not give you superhuman strength to fight off villains like Popeye's nemesis Bluto, but this leafy green and other foods containing iron can help you fight a different type of enemy -- iron-deficiency anemia. Iron-deficiency anemia, the most common form of anemia, is a decrease in the number of red blood cells caused by too little iron. Without sufficient iron, your body can't produce enough hemoglobin, a substance in red blood cells that makes it possible for them to carry oxygen to the body's tissues. As a result, you may feel weak, tired, and irritable. Vegetarian Society - Factsheet - Iron. Iron: How Much is Enough. Q: How can I tell if I’m getting enough iron? 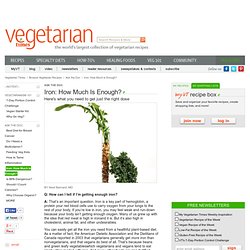 A: That’s an important question. Iron is a key part of hemoglobin, a protein your red blood cells use to carry oxygen from your lungs to the rest of your body. Iron: Dark Chocolate Contains More than Beef? According to the website, Nutritiondata.com, a one ounce serving of dark chocolate contains 19 percent of the US RDA for iron. 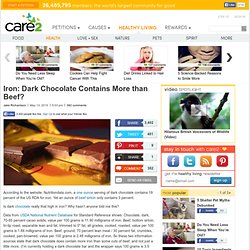 Yet an ounce of beef sirloin only contains 3 percent. Is dark chocolate really that high in iron? Why hasn’t anyone told me this? Data from USDA National Nutrient Database for Standard Reference shows: Chocolate, dark, 70-85 percent cacao solids, value per 100 grams is 11.90 milligrams of iron. 12 Top Vegan Iron Sources. If you are a vegan, what is the first argument you hear from meat-eating advocates? 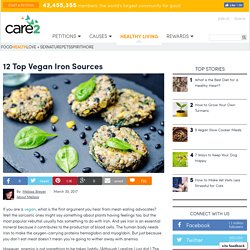 Well the sarcastic ones might say something about plants having feelings too, but the most popular rebuttal usually has something to do with iron. And yes iron is an essential mineral because it contributes to the production of blood cells. The human body needs iron to make the oxygen-carrying proteins hemoglobin and myoglobin. But just because you don’t eat meat doesn’t mean you’re going to wither away with anemia. However, anemia is not something to be taken lightly. Love This? Thanks for subscribing! Iron Requirements The Food and Nutrition Board at the Institute of Medicine recommends the following: Infants and children • Younger than 6 months: 0.27 milligrams per day (mg/day) • 7 months to 1 year: 11 mg/day • 1 to 3 years: 7 mg/day • 4 to 8 years: 10 mg/day. Iron for Vegetarians. Iron intake for vegetarians - myDr.com.au. Email to a friend Close Window Iron deficiency can be a nutritional problem and vegetarians, especially women, may need to take special care to avoid it. 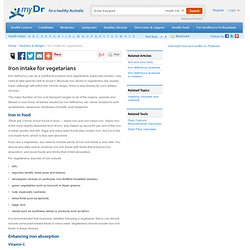 Because iron stores in vegetarians are usually lower (although still within the normal range), there is less leeway for poor dietary choices. The major function of iron is to transport oxygen to all of the organs, muscles and tissues in your body. Anaemia caused by iron deficiency can cause symptoms such as tiredness, weakness, shortness of breath, and headache. Viva! Health. Why Plant Iron is Best By Dr Justine Butler, Senior Health Campaigner One of the commonest food myths is that vegetarians and vegans have a higher risk of iron deficiency anaemia because they don't eat meat. 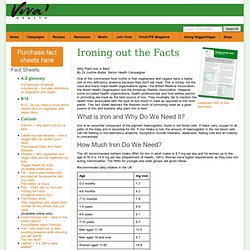 This is simply not the case and many major health organisations agree - the British Medical Association, the World Health Organisation and the American Dietetic Association. However, some so-called 'health' organisations, health professionals and food writers persist in promoting red meat as the best source of iron. Viva! Health. By Dr Justine Butler The association of vitamin B12 with animal foods such as fish, meat, poultry, eggs, milk and dairy products has helped create the myth that this vitamin can only be obtained from these foods and that a vegetarian or vegan diet provides a substandard amount. 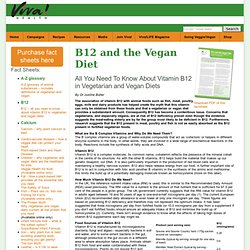 Consequently B12 has become a contentious issue. Concerns that vegetarians, and especially vegans, are at risk of B12 deficiency prevail even though the evidence suggests the meat-eating elderly are by far the group most likely to be deficient in B12. Furthermore, research suggests that the B12 present in meat, poultry and fish is not as easily absorbed as the B12 present in fortified vegetarian foods.

What are the B Complex Vitamins and Why Do We Need Them? Vitamin B12 Vitamin B12 is a complex molecule; its common name, cobalamin reflects the presence of the mineral cobalt in the centre of its structure. How Much Vitamin B12 Do We Need? Vitamin B12 Deficiency B12 deficiency can be divided into four stages. Dietary Sources of Iron for Vegetarians. Vegetarians need more iron in their diets than nonvegetarians because the iron in plant foods is not absorbed as efficiently as the iron in meat. 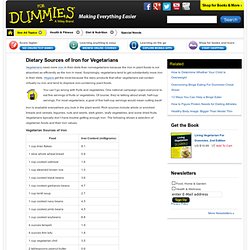 Surprisingly, vegetarians tend to get substantially more iron in their diets. Vegans get the most because the dairy products that other vegetarians eat contain virtually no iron and tend to displace iron-containing plant foods. You can’t go wrong with fruits and vegetables. One national campaign urges everyone to eat five servings of fruits or vegetables. Of course, they’re talking about small, half-cup servings. Foods High in Iron for Pescatarians. Iron in the Vegan Diet. By Reed Mangels, PhD, RD From Simply Vegan 5th Edition Summary. 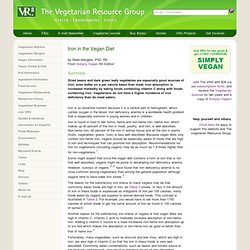 Vegetarian Recipes for Athletes. If you like plant-based recipes you’ll love our plant-based fitness guide. 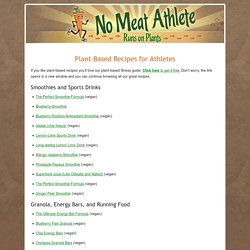 Click here to get it free. Don’t worry, the link opens in a new window and you can continue browsing all our great recipes. Smoothies and Sports Drinks Granola, Energy Bars, and Running Food Pasta, Risotto and Polenta Pizza.