Image of the Week: Antarctic ice-shelf thickness. Clues to the Earth's ancient core. Old rocks hold on to their secrets. 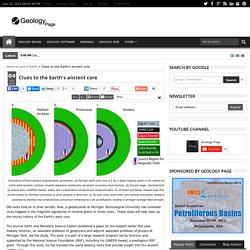 Now, a geophysicist at Michigan Technological University has unlocked clues trapped in the magnetic signatures of mineral grains in those rocks.. These clues will help clear up the murky history of the Earth's early core. The journal Earth and Planetary Science Letters published a paper on the subject earlier this year. Aleksey Smirnov, an associate professor of geophysics and adjunct associate professor of physics at Michigan Tech, led the study. The work is a part of a large research program led by Smirnov and supported by the National Science Foundation (NSF), including his CAREER Award, a prestigious NSF grant. Earth's Ancient Geodynamo The magnetic field comes from the earth's core: The solid inner core, made of iron, spins and powers convective currents in the liquid outer core.

Smirnov and his co-author, David Evans of Yale University, examined the paleointensity measurements of rocks more than two billion years old. Magnetic Records in Rocks. All of the world’s greenhouse gas emissions in one awesome interactive pie chart. The United Nations' Paris climate talks are less than six months away, and have been widely described as our best chance for an international agreement to curb the effects of global climate change. 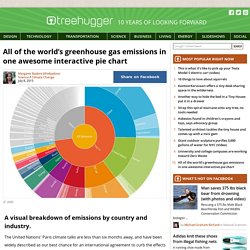 In order to reach that goal, we need to know who and where are the biggest emitters. The World Resources Institute (WRI) has built an open-source database to provide individuals, companies and governments with reliable data about climate change, called the CAIT Climate Data Explorer. If you’ve ever wished you could visualize all global emissions at once, WRI has just the tool, built from CAIT data. This interactive infographic takes a look at the world’s biggest emitters by country, along with the top emissions sources within each country, based on just-released information from 2012.

Maps Mania: The Geography of Everything. GroupLens from the University of Minnesota and the WebSAIL group at Northwestern University have just released a new map based search engine called Atlasify. 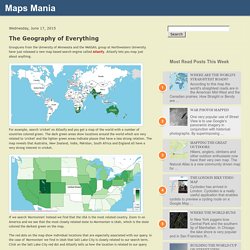 Atlasify lets you map just about anything. For example, search 'cricket' on Atlasify and you get a map of the world with a number of countries colored green. The dark green areas show locations around the world which are very related to 'cricket' and the lighter green areas indicate places that have a less strong relation. The map reveals that Australia, New Zealand, India, Pakistan, South Africa and England all have a very strong interest in cricket. If we search 'Mormonism' instead we find that the USA is the most related country. International Chronostratigraphic Chart "Version (v2015/01)" Arctic Ocean Seafloor Map: Depth, Shelves, Basins, Ridges.

Arctic Ocean: History and Now The Arctic Ocean has played a minor role in world history. 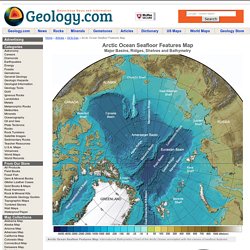 Ice cover severely hinders navigation; the area is remote; there is almost no infrastructure; winters are dark and very cold; summer days are short and foggy. These challenges make the Arctic Ocean a hostile and difficult area. Today, we are at a time when interest in the Arctic Ocean is growing steadily. A warming climate is thinning and shrinking the polar ice pack to allow increased navigation.

The new interest in the Arctic Ocean is not confined to its surface; it extends to the bottom where information about its structure is needed by geologists, oceanographers, biologists and other people who work there. This map will change how you see the world. Calling all geography nerds: The US Geological Survey has published a global ecosystems map which it says is the most detailed in the world. 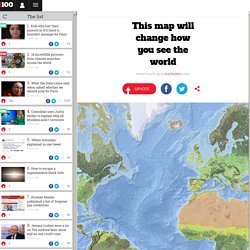 The map is an interactive mosaic of 3.5 billion cells, detailing more than 40,000 unique ecological areas based on four different factors that determine the make-up of an ecosystem – bioclimate, landforms, rock type and land cover. Cartography nuts can use the browser to click on any spot of the map to be given a description of the ecosystem in that exact location as well as scroll through a selection of places the USGS has picked out for special mention (see examples below). The Association of American Geographers, which developed the new map with the USGS, explains it was created to allow scientists, land managers, conservationists, developers, and the public "to improve regional, national, and global resource management, planning, and decision making". 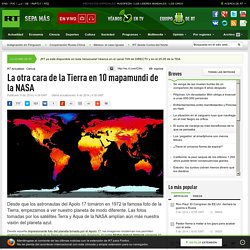 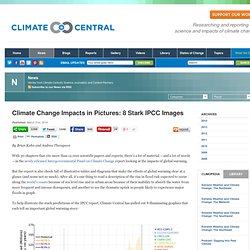