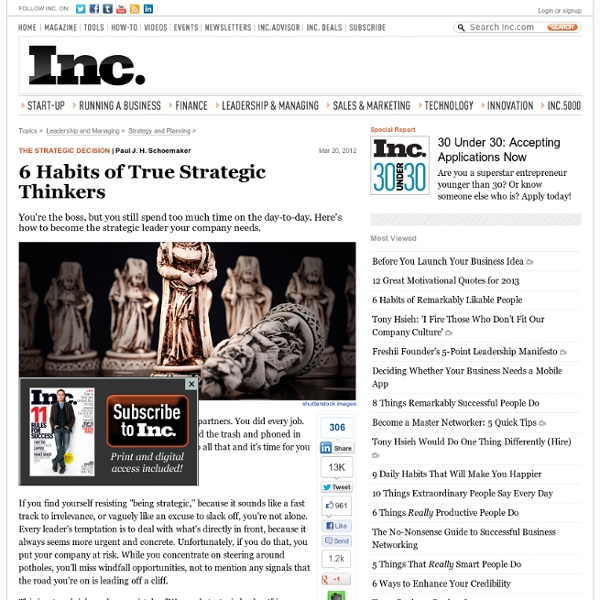 In the beginning, there was just you and your partners. You did every job. You coded, you met with investors, you emptied the trash and phoned in the midnight pizza. Now you have others to do all that and it's time for you to "be strategic." Whatever that means. If you find yourself resisting "being strategic," because it sounds like a fast track to irrelevance, or vaguely like an excuse to slack off, you're not alone. This is a tough job, make no mistake. After two decades of advising organizations large and small, my colleagues and I have formed a clear idea of what's required of you in this role. Anticipate Most of the focus at most companies is on what’s directly ahead. Look for game-changing information at the periphery of your industrySearch beyond the current boundaries of your businessBuild wide external networks to help you scan the horizon better Think Critically “Conventional wisdom” opens you to fewer raised eyebrows and second guessing. Interpret Ambiguity is unsettling. Decide

Going Solo: A Brief History of Living Alone and the Enduring Social Stigma Around Singletons by Maria Popova “Despite its prevalence, living alone is one of the least discussed and, consequently, most poorly understood issues of our time.” In the 4th century BC, Aristotle admonished: The man who is isolated, who is unable to share in the benefits of political association, or has no need to share because he is already self-sufficient, is no part of the polis, and must therefore be either a beast or a god. Indeed, the ancient world held exile as the most formidable form of punishment, second only to execution, though in Greek tragedies it was often regarded as a fate worse than death. For more than two millennia, this fear and loathing of solitary life endured and permeated the fabric of society.

Schafer: Kickstarter won't take business from traditional publishers, yet With its record-breaking Kickstarter campaign, San Francisco-based Psychonauts and Stacking developer Double Fine has drawn a lot of eyes to the role the crowdfunding service can play in the future of how games are developed and funded. Some have even suggested that it could threaten the traditional publishing model in a very serious way. Following his lecture Thursday night at the NYU Game Center, Double Fine's Tim Schafer talked about that Kickstarter adventure game project, and also shared his thoughts on how to address the needs of today's adventure gaming audience, as well as the scarcity of humor in the genre. Schafer said that while Kickstarter offers interesting opportunities in specific cases, it doesn't look to be an immediate threat to the publisher format.

Strategy: An Executive’s Definition This article was written with Kasturi Rangan and Evan Hirsh. The question “What is strategy?” has spurred numerous doctoral dissertations, countless hours of research, and hearty disagreement among serious management thinkers. Perhaps this is why many executives also struggle with it.

How to Create a Distribution Strategy ...That Banks by THOM HOLLAND How many times have you heard marketers talk about creating a distribution strategy? …You can probably count the numbers of times on one hand. The truth is, marketing “gurus” love to tell you how to promote your products. They get stuck on things like pay per click advertising and building a social media presence.

Eight Qualities of Remarkable Employees Great employees are reliable, dependable, proactive, diligent, great leaders and great followers... they possess a wide range of easily-defined—but hard to find—qualities. A few hit the next level. Some employees are remarkable, possessing qualities that may not appear on performance appraisals but nonetheless make a major impact on performance. Here are eight qualities of remarkable employees: 1. They ignore job descriptions. The Smiley Book of Colors By Maria Popova When Freud came to believe he was going to die between the ages of 61 and 62, and subsequently began seeing the two numbers everywhere he looked, which only intensifying the urgency of his superstition, he came to observe the value of selective attention in focusing the unconscious. But what if we engineered this selective attention purposefully and aligned it with our emotional and mental well-being?

CEO Social Mindset: 25 Tips for a Healthy Social Business Mindset Attitude and mindset are often the key to success in life. With the right mindset you can learn new things, take on mountains, lead teams to success and accomplish more than you ever dreamed possible. Becoming a social business is no easy task. It’s going to take smart thinking, dedication, teamwork, integration, getting real with the skeletons in the closet, and a “can do” attitude. The social ecosystem is still evolving. Acknowledging that change is the only real guarantee is a good first step. 4 Secrets of Great Critical Thinkers In 2009, J D Wetherspoon, a chain of more than 800 pubs in the UK, was facing declining sales. Demand for beer had been down for five years. In addition, pricing pressure from super market chains was intense, and higher alcohol taxes further squeezed its already tight margins. What would you say is the company's real business problem? Most people see it as a sales problem and recommend better marketing and promotion. But this reflex may be wrong.

How To Create A Brand With Values Brands That Are Born With Values The great stories of the oral tradition have always contained lessons encouraging people to pursue their higher values. In comparing myths across cultures and times to develop his "Hero’s Journey" model, Joseph Campbell found that higher values were the key ingredient to story success. Today, digital tools are spawning a new peer-to-peer oral tradition in communications. Why Flexible Hours Inspire Performance "What time do you want me to start work?" That's the question a new hire recently asked me. She looked a little startled by my reply. "I don't care." Why We Love: 5 Must-Read Books on the Psychology of Love It’s often said that every song, every poem, every novel, every painting ever created is in some way “about” love. What this really means is that love is a central theme, an underlying preoccupation, in humanity’s greatest works. But what exactly is love?

Your Game Is A Graph Player Graphs The AppData graph above is a summary of many individual graphs, two for each player. The first shows tolerance, or the increasing likelihood that the player will stop playing for reasons of boredom or annoyance. The tolerance graph is asymptotic, meaning that likelihood approaches but never reaches 100%, and is measured against time. Every player has a personal tipping point where they will put the controller down, forget to play or sell their copy of your game, and once they do they usually never come back. The One Skill All Leaders Should Work On - Scott Edinger by Scott Edinger | 11:30 AM March 29, 2012 If I had to pick one skill for the majority of leaders I work with to improve, it would be assertiveness. Not because being assertive is such a wonderful trait in and of itself.

The OODA Loop: Playing chess with half the pieces Nivi · November 20th, 2008 You might know John Boyd as the OODA Loop guy. I never really “got” the OODA Loop so, based on Eric Ries’ recommendation, I read this book. In a software startup, the OODA Loop looks like this: (1) Come up with an idea, (2) Code it, launch it, (3) Learn from usage data. Keep repeating the loop, each time using the Learnings to influence your next idea.