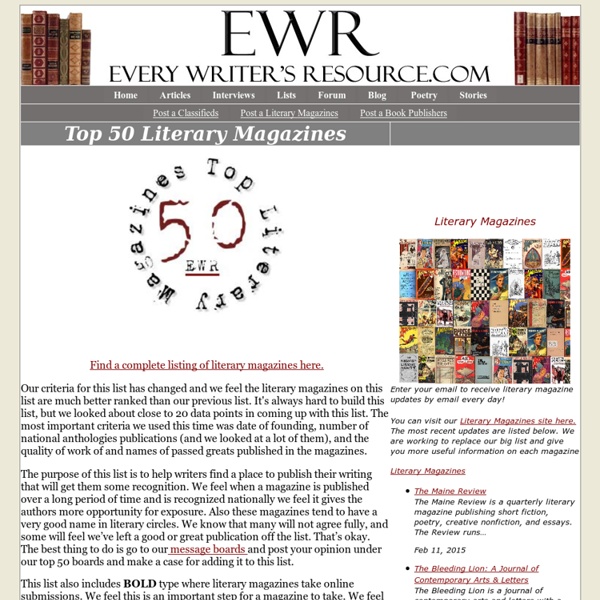 Find a complete listing of literary magazines here. Our criteria for this list has changed and we feel the literary magazines on this list are much better ranked than our previous list. It's always hard to build this list, but we looked about close to 20 data points in coming up with this list. The most important criteria we used this time was date of founding, number of national anthologies publications (and we looked at a lot of them), and the quality of work of and names of passed greats published in the magazines. The purpose of this list is to help writers find a place to publish their writing that will get them some recognition. This list also includes BOLD type where literary magazines take online submissions. Top 50 Literary Magazine New Yorker The best of the best. Ploughshares Founded in 1971 Ploughshares is our best and highest ranked university non-commercial literary magazine. The Atlantic Founded in 1857 and often honored by national anthologies. Harper's Magazine Tin House Epoch Related:  Submission Guidelines

Mark and Delia Owens, poachers, Zambia shooting In the early nineteen-seventies, Mark and Delia Owens, two graduate students in biology at the University of Georgia, were seized by the idea of resettling in remotest Africa. They organized an auction, sold their possessions, and used the modest proceeds to buy camping equipment and a pair of one-way air tickets to Johannesburg. When they arrived, in January, 1974, Delia, the daughter of a Georgia trucking executive, was twenty-four years old. Mark, who grew up on a farm west of Toledo, Ohio, was twenty-nine, the divorced father of a four-year-old boy named Christopher. Mark and Delia had scoured the map of Africa, searching for a site so isolated that its wildlife would have no knowledge, and no fear, of humans. In their book “Cry of the Kalahari,” which was published in 1984, the Owenses described their dreadful living conditions: “We rationed ourselves to seven gallons of water each per week, for bathing, cooking, and drinking.

Profiles: The Misfit The moving images on the camera monitor offered, I thought, a plausible depiction of one of the drawbacks of life in the Old West—an invasive urological procedure conducted without benefit of anesthesia. “A situation involving significant unpleasantness” was how David Milch, the creator of “Deadwood,” had described the scene being filmed on a soundstage at Melody Ranch Studios, in Santa Clarita, thirty miles northwest of Los Angeles. One of Milch’s inventions, Al Swearengen—or, rather, Milch’s conception of the real Al Swearengen, owner of the Gem Saloon, a tavern and bordello in the town of Deadwood, just outside the Dakota Territory, circa 1877—was about to have a metal probe called a Van Buren’s sound inserted into his urethra by Doc Cochran, a tormented physician on the verge of a breakdown. “You know, that one seemed to sail pretty goddam good,” Dourif said. “Go get ’em,” Milch said. “It isn’t just about witnessing a woman suffering,” he said. “When did you write this scene?”

John Steinbeck's bitter fruit I read The Grapes of Wrath in that fierce span of adolescence when reading was a frenzy. I was all but drowned in the pity and anger John Steinbeck evoked for these people, fleeing Oklahoma to seek work but finding nothing save cruelty, violence, the enmity of immoral banks and businesses, and the neglect by the state of its own people in the Land of the Free. The novel was published in 1939 and delivered a shock to the English reading world. But for years I did not read him. Earlier this year, when asked to make a film about Steinbeck for the BBC, I went back with apprehension. We started filming with a small crew in Oklahoma, near the spot where the novel begins. In Steinbeck's day, this was part of the American dust bowl. In the novel, the Joad family are driven off their farm by the banks. What happened to the Joad family was an attempt to keep them and everybody like them out of California. Undercover on the bread line Salinas was Steinbeck's home town. A liar and a communist

Contact the team at Aeon Magazine You can email us at contact@aeonmagazine.com for syndication requests, technical problems and any other general queries. Pitches should be sent to editorial@aeonmagazine.com following the guidelines below. Syndications If you would like to republish one of our articles online or in print, first read our syndication policy, which includes details of our fees. Please note we do not allow online/digital re-publication of either full-length or substantial excerpts of our essays in English under any circumstances. Contact a writer We cannot pass on your contact details to any of our writers unless this is in relation to an interview request or similar professional contact. Feedback on an essay The best way to let us know your opinion about one of our essays is via the comments section. Terms and conditions, word rates Aeon Magazine pays all of its contributors; see our freelance terms and conditions. Pitches Any pitches that do not meet our specifications below will not be considered.

Carol Ann Duffy: 'Poems are a form of texting' The poet laureate, Carol Ann Duffy, is launching a poetry competition for secondary school pupils. Photograph: Christopher Furlong/Getty Images Hardly a week goes by without a warning about how educationally detrimental it is for children to spend hours of every day screen-gazing and message-sending. "The poem is a form of texting ... it's the original text," says Carol Ann Duffy. Duffy, who became Britain's first female poet laureate in 2009, is passionate about the teaching of poetry in school. So, if texting is preparing children for a lifetime of poetry, are today's youngsters better at poetry than children in the past? Duffy says she owes her career as a poet to her exposure to poetry at school in the 1960s and early 70s, when she was growing up – and that's why she's determined to do all she can to further strengthen its place in the curriculum. Duffy says when she realised how much she loved poetry, she started to keep a notebook with her favourite poems in it.

CALL FOR SUBMISSIONS: ISSUE 4 | GUTS Canadian Feminist Magazine Image: J. Dyck Posted by guts on Monday, February 23, 2015 · Leave a Comment February 23, 2015 Our upcoming issue will take on the topic of Moms. Every single person on earth spent some time growing within the body of another human being. For many of us, thinking critically about the lives and decisions of our own mothers and grandmothers is an early introduction to feminist modes of thinking: Why are their lives the way they are? Motherhood was once seen as part and parcel of feminist visions of change; in Canada in particular, suffragist politics emphasized the distinct ability of mothers to care for and shape society. These days, questions of motherhood, parenting, reproduction, and work are often framed in terms of personal lifestyle preferences. At the same time, motherhood is a political and social identity that is at once revered and demeaned. Possible topics might include: GUTS accepts literary essays and reviews, long form journalism, interviews, letters, and fiction.

Ghosts of Gone Birds: exhibition enlists artists to save endangered species | Environment They are all, alas, bleeding demised, passed on, no more, ceased to be, bereft of life and resting in peace. Like Monty Python's dead parrot, the great auk that author Margaret Atwood is knitting probably shuffled off his mortal coil, ran down the curtain and joined the choir invisible 150 years ago. But the loss of species also including the Hawaiian crow and Jamaican red macaw may yet help currently endangered birds, hope the organisers of an ambitious multimedia art project. The project is called Ghosts of Gone Birds and is the brainchild of film-maker Ceri Levy and creative consultant Chris Aldhous. Levy, best known for his film Bananaz about the pop group Gorillaz, said he got into birds quite recently following a holiday on the Isles of Scilly with his wife. He got an idea of making a film on birdwatchers which then morphed in to the art project: "I became far more interested in what they were watching than watching them."

Top writers tackle climate change in short stories Novelists from Margaret Atwood to David Mitchell are hoping to bring the dangers posed by climate change to life, through a new collection of short stories tackling the climate crisis. I'm With the Bears, taking its title from environmentalist John Muir's comment that "when it comes to a war between the races, I'm with the bears", will also feature stories by TC Boyle, Helen Simpson, Toby Litt, Paolo Bacigalupi and Kim Stanley Robinson. Out this October from radical press Verso, it is a response, said the publisher, to the absence of creative fiction dealing with climate change, an issue raised by Ian McEwan in the Guardian last year. Mitchell, twice shortlisted for the Man Booker prize, has imagined a near future in which oil sells for $800 a barrel in his story The Siphoners. Acclaimed short story writer Boyle has written an account of early eco-activists in The Siskiyou, July 1989, while Nathaniel Rich's Hermie is a comic fantasy about a marine biologist haunted by his youth.

Submissions For information on submitting artwork and photography, please CLICK HERE. Submission enquiries BY EMAIL ONLY to the editor, Sharon Blackie, at info[at]earthlines[dot]org[dot]uk. We're sorry but we're unable to discuss submission ideas by telephone. Although we aim to read and respond to new submission enquiries within two weeks, it doesn't always work out that way, so please be patient. Please don’t attach artwork/photography files to your email enquiry without asking us first! You may send written work as an attachment, but we can accept files in Microsoft Word (any document types) or PDF format only. Please also note that we’re looking for new, previously unpublished work (published neither online nor in print). We're generally working at least a couple of issues in advance, especially for longer pieces. Although we will gladly consider and include writing from elsewhere in the world, our main focus where possible will be on writing from the UK, Ireland, and other parts of Europe.

Björk: 'Manchester is the prototype' Originally formulated by scientist Edward O Wilson, the biophilia hypothesis suggests that human beings have an innate affinity with the natural world – plants, animals or even the weather. Yet it's not biophilia but good old-fashioned fandom that has drawn a small band of Björk obsessives to queue outside Manchester's Campfield Market Hall since 10am this morning. Not that there's anything old-fashioned about the woman they are here to see. Biophilia is the Icelandic singer's new project – the word means "love of living things" – and promises to push the envelope so far you'll need the Hubble telescope to see it. A collection of journalists have already had a preview at a press conference in the Museum of Science and Industry over the road. Björk is absent, preparing for tonight's live show, her first in the UK for over three years, which will open the Manchester international festival. At the museum, Snibbe is demonstrating the apps.