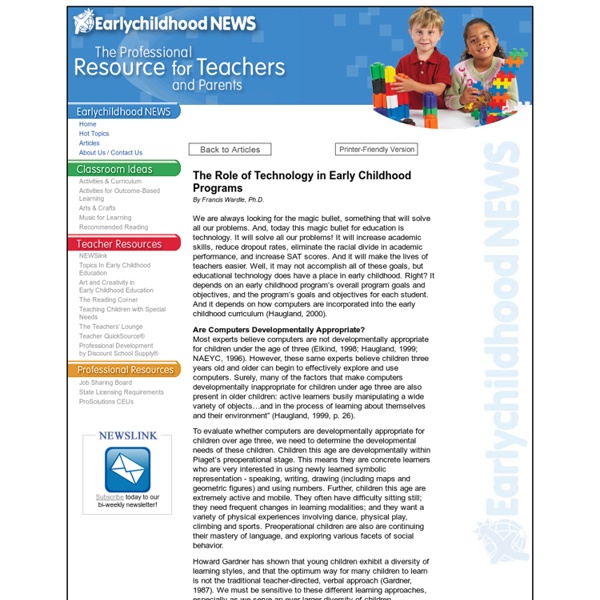 We are always looking for the magic bullet, something that will solve all our problems. And, today this magic bullet for education is technology. It will solve all our problems! It will increase academic skills, reduce dropout rates, eliminate the racial divide in academic performance, and increase SAT scores. And it will make the lives of teachers easier. Well, it may not accomplish all of these goals, but educational technology does have a place in early childhood. Are Computers Developmentally Appropriate? To evaluate whether computers are developmentally appropriate for children over age three, we need to determine the developmental needs of these children. Howard Gardner has shown that young children exhibit a diversity of learning styles, and that the optimum way for many children to learn is not the traditional teacher-directed, verbal approach (, 1987). 1. 2. 3. 4. 5. 6. This approach cannot be implemented with only one computer in the classroom. ReferencesElkind, D. (1998). Related:  gracepepicelli

Using Technology in the Early Childhood Classroom By Kimberly Moore Kneas, Ph.D. and Bruce D. Perry, M.D., Ph.D. Early Childhood Today: Are young children's brains (ages three through six) well suited to the use of technology? (We define technology as children using cameras, computers, tape recorders and video cameras in classroom projects.) If so, how? Are some forms of technology better than others for these specific age levels? Dr. I see technology doing the same things today. Modern technologies are very powerful because they rely on one of the most powerful genetic biases we do have — the preference for visually presented information. The problem with this is that many of the modern technologies are very passive. Sitting young children in front of a television for hours also prevents that child from having hours of other developmental experiences. On the other hand there are many positive qualities to modern technologies. Dr. Back to top Dr. I think that balance and timing are the keys to healthy development. Dr. Dr. Dr. Dr.

Australia: Average 6.4 screens per home March 29, 2017 The Q4 (October-December) 2016 Australian Multi-Screen Report – from Regional TAM, OzTAM and Nielsen – continues to document how growing content, platform and screen choices have caused a gradual shift in the way consumers apportion their viewing across devices. Australians are voracious consumers of broadcast TV and other video, and as of Q4 2016 had a dizzying array of options by which to do so. While there is much discussion about television’s place in today’s screen mix, several trends are clear: More screens. On average Australians watch 2 hours and 39 minutes (2:39) of broadcast TV each day, or 81:18 per month. The TV set is not just for TV any more. This means 28 per cent of the time people now spend with their TV sets goes to something other than watching live TV or playing back broadcast TV channel content within 28 days – and partially explains why Australians on average now watch 31 fewer minutes of live and playback TV per day than they did in Q4 2010.

www.project2061.org/publications/earlychild/online/perspect/johnson.htm Dialogue on Early Childhood Science, Mathematics, and Technology Education Perspectives Early Childhood Education in Science, Mathematics, and Technology: An NSTA Perspective Fred Johnson The National Science Teachers Association (NSTA) believes two issues must be considered regarding early childhood education. Current research on brain development emphasizes the importance of early stimulation in developing brain connections from birth. “Learning windows”—optimal times for learning at particular developmental stages—should be used to enhance understanding of science, mathematics, and technology in young children. Piaget’s theory of cognitive development was created in the 1920s, long before access to medical imaging technology and current brain research was available. Research on children’s motivation to learn and their underachievement reveals that young children are full of curiosity and a passion for learning (Raffini 1993). Financing issues are always a concern. References Clark, J.

Using technology in service delivery to families, children and young people - Technology use in Australia Internet connectivity has increased rapidly over recent years in Australia, particularly for young people. The Australian Bureau of Statistics (ABS; 2012) reported that in 2010–11, 79% of Australians aged 15 years and older (including 96% of 18–24 year olds) had accessed the Internet in the previous twelve months. A recent national survey by Sensis and Australian interactive Media Industry Association (2012) reported that 98% of respondents had Internet access and 52% of those who had access used the Internet daily. The same study reported that access was almost universal for both regional and metropolitan locations across Australia, apart from Tasmania, where access was only slightly lower (94%). A concurrent rapid increase in Internet access via mobile devices, such as smartphones and tablets, has increased users’ access to Internet services from any location at any time. Box 2: Just because we can use social networking sites, should we?

Nature, Nurture and Early Brain Development This guide is also available in Portable Document Format. Click the PDF button to the left to get it Sara Gable, State Extension Specialist, Human Development Melissa Hunting, Undergraduate Intern, Human Development For some time, we have known that development results from the dynamic interplay of nature and nurture. New research on early brain development provides a wonderful opportunity to examine how nature and nurture work together to shape human development. The nature of early brain development At birth, the human brain is still preparing for full operation. Figure 1. As a child develops, the synapses become more complex, like a tree with more branches and limbs growing. Between birth and age 3, the brain creates more synapses than it needs. How the social and physical environments respond to infants and toddlers plays a big part in the creation of synapses. The nurture of early brain development Do people respond to me? Learning with all five senses Thinking and feeling Lally, J.

Screen Time Still an Australian Pastime – Nielsen The latest figures from the Australian Video Viewing Report from Regional TAM, OzTAM and Nielsen show the average Australian home now has 6.6 screens in which to consume video content. These screens include multiple devices such as internet-capable TVs, tablets, smartphones, and high definition (HD) TV sets. More devices in homes and extensive content choice encourage the cross-screen ‘spreading’ and is changing viewing patterns. The ‘spreading’ that arises from cross-platform and multi-screen activity has impacted the amount of time people spend watching ‘traditional’ TV, which is particularly apparent in the evenings and in live viewing. However, broadcast TV watched on in-home TV sets still accounts for most video viewing. The report found 19.64 million Australians (82.6% of the population in people metered markets) watched broadcast TV (free-to-air and subscription channels) on in-home TV sets each week in Q4 2017. Furthermore, Australians in all age groups continue to watch TV.

A Summit on Early Childhood Cognitive Development (April 30, 2002)-- Pg 3 Susan Landry Today I will describe how researchers and educational training staff from the Center for Improving the Readiness of Children for Learning and Education (CIRCLE), University of Texas-Houston Health Science Center, have been involved in the implementation and evaluation of a model of professional development for Head Start teachers. CIRCLE's research and training efforts have been supported with over 15 years of federal, state, and private funding on issues related to understanding the factors that are most important for supporting young children's cognitive and social development. The problem. What educational research tells us. What developmental research tells us. In our own research there are six key essentials for optimal support of young children's cognitive development. An innovative professional development model. We began the training program with a 3-day workshop to inform and problem-solve with program administrators, coordinators, and mentor teachers.

Social Studies for Early Childhood and Elementary School Children: Preparing for the 21st Century A Report from NCSS Task Force on Early Childhood/Elementary Social Studies Approved by NCSS Board of Directors, June 1988 This position paper will discuss the definition, rationale, and goals for social studies in the early childhood/elementary years; the developmental characteristics that should be considered in planning a social studies program; an overview of the basic research for elementary social studies; a look at the current status of social studies in the elementary school; and a discussion of preservice and in-service education for teachers of early childhood/elementary social studies. Society is characterized by increasingly rapid social and technological change. When they leave the classroom, many children do not return immediately to the family setting but go to a day-care facility where they again interact with others from a variety of backgrounds. I. Consider a kindergarten class in any one of thousands of school systems in the United States. II. III. Knowledge. Skills. V.