I just want to be something, something real - sicklikewinter. He’s a delicate thing, fragile and tiny. 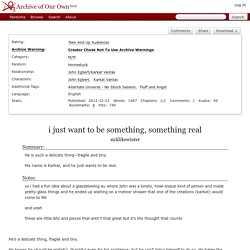 He knows he should be grateful, thankful even for his existence; but he can’t bring himself to do so. He hates the existence he’s been brought into. The world goes on without him, filled with excitement—thrilling and terrifying and beautiful even! —and he can’t even see it. One wrong move and he would shatter. Break. Crack. Playing It By Ear - Vellev. Index and ring fingers trilled final notes, slowly fading out. 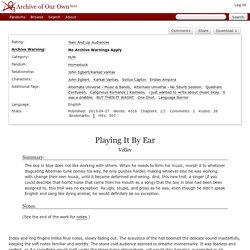 The acoustics of the hall boomed the delicate sound masterfully, keeping the soft notes familiar and worldly. The stone cold audience seemed to breathe momentarily. It was fearless and perfect, as if a snowflake would melt under the sheer living atmosphere, yet would stay hanging, suspended in air. The adolescent slid from behind the piano bench, not moving the sleek black piece of furniture at all. He rose and took a soundless bow, his movements awkward and wobbly, seeming to break the entire perfection he showed while on stage. There were other performances after his, a beautiful blonde human girl, wearing a deep long purple dress. This was exactly why the boy in blue was so surprised when approached by a troll preceding him in the show. The boy in blue is taken aback for a moment.

The Rom Com At The End Of The Universe

Ragged Jackets and No Traces - minamiren. Chapter Text Karkat had been your absolute, very best friend until you hit the age of sixteen. 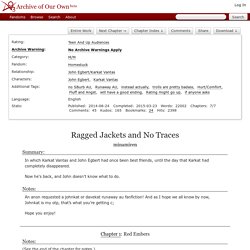 Reason being, that he had disappeared from his home (or hive, as he was prone to calling it) without so much as a trace. To be honest, your friendship with Karkat was pretty unusual in the first place. Humans and trolls tended to keep themselves as separated and secluded from each other as possible, despite the fact that it was perfectly legal for the two races to interact. 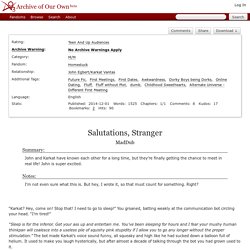 Hey, come on! Stop that! I need to go to sleep!” You groaned, batting weakly at the communication bot circling your head. “I’m tired!” “Sleep is for the inferior. Burnt Coffee and Redundant Tea - NoBrandHero. Opening shifts are the fucking worst at Starbucks. 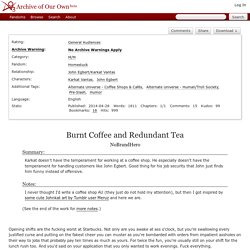 Not only are you awake at ass o'clock, but you're swallowing every justified curse and putting on the fakest cheer you can muster as you're bombarded with orders from impatient assholes on their way to jobs that probably pay ten times as much as yours. For twice the fun, you're usually still on your shift for the lunch rush too. And you'd said on your application that you only wanted to work evenings. Fuck everything. Sure you could quit, but in this crap economy and with your level of job experience (and your place on the hemospectrum), it's either the coffee serving business or McDonald's. At least there are those precious few quiet moments before the morning rush piles on you for their usual commute coffee.

Happy Accidents - eleutheria_has_won. Though it wouldn’t be until years later that they would really sit down and figure it all out from the start, the whole thing really, truly began the day that they went down to visit the girls in Fresno. 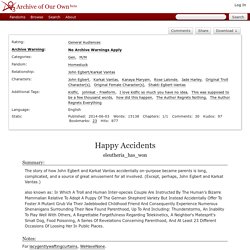 The girls, in this particular instance, consisted of one Jade Harley - John’s “rather” eccentric cousin with a passion for science that “bordered on fetishistic” (Karkat’s words, not John’s) - one Kanaya Maryam - Karkat’s jadeblooded ex-moirail, with whom he maintained a soap opera based bromance - and one Rose Lalonde - said jadeblood’s snarky psychoanalyst of a girlfriend, and childhood friend of both Jade and John. A few years ago, via the various shenanigans that tended to characterize their somewhat…odd group of compatriots, the three girls had come together, become friends, and decided to move to a new city as a group. Though the choosing process had been fraught with difficulty (and no small amount of alcohol), eventually, Fresno was decided upon. "Fuck, no, John. I was drunk. Listening At the Gate - shedreamsofstars. Grand Mediator Vantas: Orbit the Skymarshal's Bulge - jottingprosaist (jane_potter) A Million Miles Away; A Message Through The Stars - TheOrgasmicSeke. 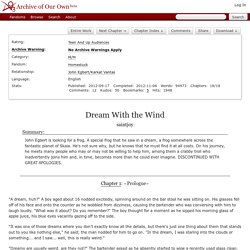 " A boy aged about 16 nodded excitedly, spinning around on the bar stool he was sitting on. His glasses fell off of his face and onto the counter as he wobbled from dizziness, causing the bartender who was conversing with him to laugh loudly. "What was it about? Do you remember? " "It was one of those dreams where you don't exactly know all the details, but there's just one thing about them that stands out to you like nothing else," he said; the man nodded for him to go on. "Dreams are usually weird, are they not? " "Of course, but... in this dream, I saw a frog. "A frog, you say?