Improving Decisions About Health, Wealth, and Happiness. DBpédia en français. Data Analysts: What You'll Make and Where You'll Make It - Udacity - Be in Demand. The Americas. 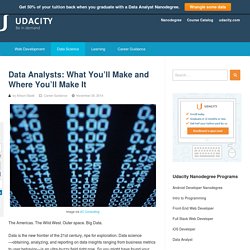 The Wild West. Outer space. Big Data. Data is the new frontier of the 21st century, ripe for exploration. Data science—obtaining, analyzing, and reporting on data insights ranging from business metrics to user behavior—is an ultra-buzzy field right now. You’ll be happy to know that all the buzz around data science isn’t a bunch of empty hype. Companies are buckling under a deluge of information newly available to them in an incredibly rich variety. As Harvard Professor Gary King told Harvard Magazine, “There is a big data revolution. That’s where you come in. High Demand for the Highly Skilled Data analysts are in extremely high demand, but the work itself is equally demanding. There’s an incredible potential, already being fulfilled in industries as varied as medicine and manufacturing, to capitalize on the deep data pool available to change the course of how products are made and marketed, how processes are executed and optimized, and how society at large advances.

Outcomes, Impacts, and Indicators. The Impact Survey was first used in 2009 to help gather data for the Opportunity for All study reports, conducted by the University of Washington’s iSchool with assistance from the Bill & Melinda Gates Foundation. 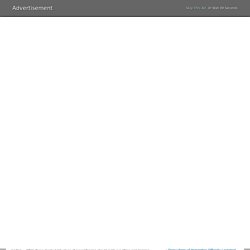 Libraries were enlisted to connect to a web survey, the results of which were used to augment responses gathered through a telephone-based poll. To our surprise and delight, we gathered more than 45,000 survey responses in just ten weeks, with about 400 libraries participating. Even more delightful was finding that libraries were using the data from Opportunity for All as well as the reports of Impact Survey results from their own ­communities. Now, six years and several versions later, the Impact Survey is still showing the value of public access technology in libraries, and more libraries than ever are taking advantage of having outcomes, impacts, and indicators ready to measure with just a little bit of copying and pasting. Demonstrating what we do The language of evaluation. Watson (intelligence artificielle) Un article de Wikipédia, l'encyclopédie libre. 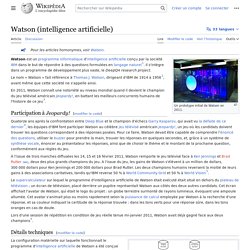 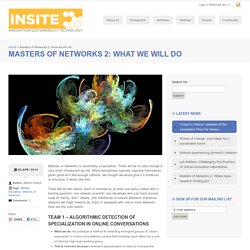 There will be no talks except a very short introduction by me. While hackathons typically organize themselves given good wi-fi and enough caffeine, we thought we would give it a modicum of structure. It works like this: There will be two teams. Each is manned by at least one policy maker with a burning question; one network scientist; one developer who can hack around code on the fly; and – ideally, one statistician to secure whatever statistical analysis we might need to do. Team 1 – Algorithmic detection of specialization in online conversations What we do: we prototype a method for detecting emergent groups of “citizen specialists” in online consultations; people that bootstrap each other into a sort of informal high-level working group.This is relevant because: emergent specialization is likely to increase the firepower of the citizens collective intelligence in online consultation. 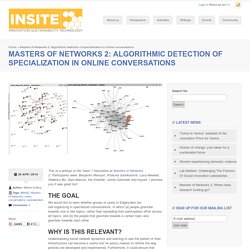 Participants were: Benjamin Renoust, Khatuna Sandroshvili, Luca Mearelli, Federico Bo, Gaia Marcus, Kei Kreutler, Jonne Catshoek and myself. I promise you it was great fun! The goal We would like to learn whether groups of users in Edgeryders are self-organizing in specialized conversations, in which (a) people gravitate towards one or two topics, rather than spreading their participation effort across all topics, and (b) the people that gravitate towards a certain topic also gravitate towards each other. Why is this relevant? Understanding social network dynamics and learning to see the pattern of their infrastructure can become a useful tool for policy makers to rethink the way policies are developed and implemented. Compared to traditional models of policy development, this method can allow for more effective and accountable policy interventions.