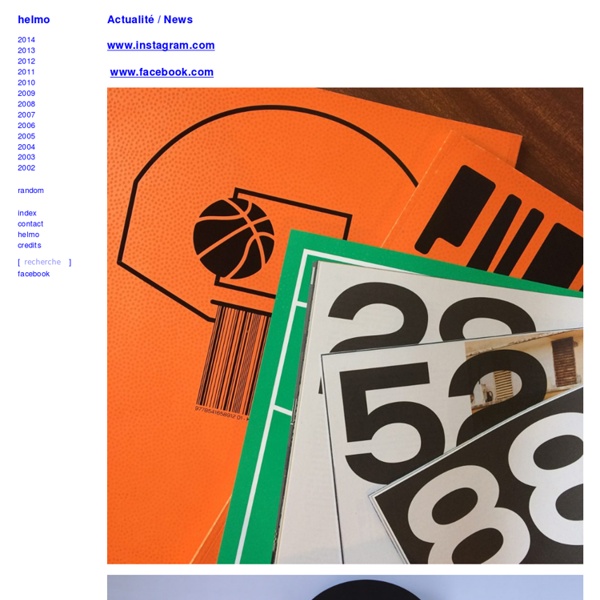 Comet Substance FeedIndex Following (109) Elmo Delmo Poster Show Elmo Delmo All Ship Shape - Dri#ter Odd Couple information is beautiful Been getting a ton of requests for ‘how to’s and guides for creating decent visualizations and information designs. Made me think: maybe I could do some workshops in this area. I like developing ideas and working with people. Could be fun! So if you think you’d like to attend a workshop on visualization or organize one for your organisation, please fill in this quick form (30 seconds). Adrian Frutiger Information about the typeface designer Adrian Frutiger and his fonts. Adrian Frutiger was born in 1928 at Unterseen near Interlaken, Switzerland. After an apprenticeship as a compositor, he continued his training in type and graphics at the Zurich School of Arts and Crafts (Kunstgewerbeschule) from 1949 to 1951, being taught by two renowned professors, Alfred Willimann and Walter Käch. Frutiger went to Paris in 1952 and worked as typeface designer and artistic manager at Deberny & Peignot. His first typeface creations were Phoebus (1953), Ondine (1954) and Meridien (1955), and through the foundry's connections with Photon/Lumitype Frutiger created some of the earliest typefaces for photocomposition.

Danny Haas Crafts Magnificent 'Star Wars' and Superhero Prints [Art Until the day comes when Shepard Fairey starts making Star Wars posters, Danny Haas’ Darth Vader and Boba Fett prints will have to tide you over. He’s got some pretty rad designs, though, and his Yoda, Luke and Han prints would all be transferable to t-shirts in a perfect world. Haas takes a handful of different approaches to his work, which he shares on his own website and sells through his Society6 page. A few of his other pieces are available on shirts and iPhone covers there, including a Fairey-ish series of secret identity hero works featuring Superman, Batman and Iron Man.

Lucian Bernhard The Priester Match poster is a watershed document of modern graphic design. Its composition is so stark and its colors so starling that it captures the viewer's eye in an instant. Before 1906, when the poster first appeared on the streets of Berlin, persuasive simplicity was a rare thing in most advertising: posters, especially tended to be wordy and ornate. Crazy4Cult Art Immortalizes Cult Movies inShare0 Billy Perkins' mushroom-cloud-layin' M.F. pays tribute to Pulp Fiction and makes an eye-grabbing cover for the Crazy4Cult: Cult Movie Art book. Shepard Fairey's Obey Billboard echoes sci-fi flick They Live's theme. Joe Faux's Citizens of Mongo poster pays tribute to Flash Gordon. Jeff McMillan's We're Going to Need a Bigger Bunny takes a bite out of Jaws.

Polimekanos: About Polimekanos is a graphic design practice based in London. It was founded in 2001 by Joseph Kohlmaier and Stefan Kraus and works across a variety of media, from visual identities and books to exhibition design, signage and websites. Our clients include individuals and small businesses, as well as institutions in the corporate, educational and cultural fields. People Joseph Kohlmaier was born in Vienna, Austria. Art of the Menu About Art of the Menu, is a division of UnderConsideration, cataloguing the underrated creativity of menus from around the world. Art of the Menu uses Typekit to render Proxima Nova by Mark Simonson and Adelle by Type Together. Art of the Menu is run with Six Apart’s MovableType 6.3.2 Syndicate / RSS Feed All comments, ideas and thoughts on Art of the Menu are property of their authors; reproduction without the author’s or Art of the Menu’s permission is strictly prohibited

Hello, World. The Idea: Making the move from a tech to a lifestyle brand. With this project, we set out to create a top-to-bottom transformation of the Airbnb brand to reflect the growing global audience.