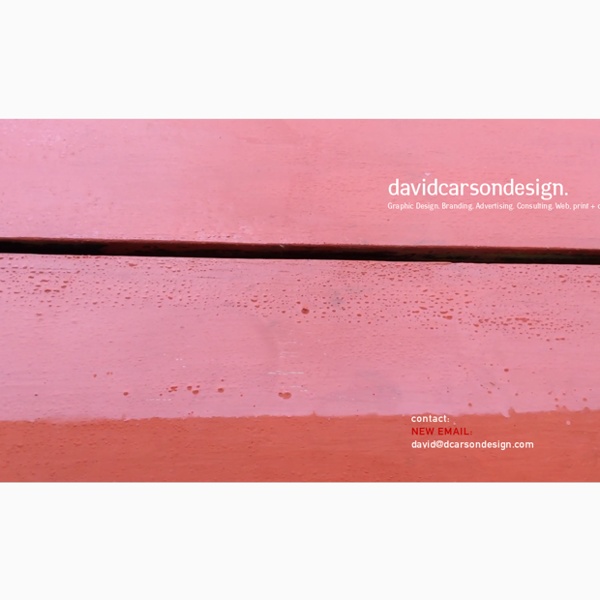 Neville Brody Neville Brody (born 23 April 1957 in London) is an English graphic designer, typographer and art director.[1] Early life and education[edit] Neville Brody was born in Southgate, London on 23 April 1957. He attended Minchenden Grammar school and studied A-Level Art, very much from a fine art viewpoint. In 1975 Brody went on to do a Fine Art foundation course at Hornsey College of Art, once renowned for its late sixties agitation, now part of Middlesex University.

Adrian Frutiger Information about the typeface designer Adrian Frutiger and his fonts. Adrian Frutiger was born in 1928 at Unterseen near Interlaken, Switzerland. After an apprenticeship as a compositor, he continued his training in type and graphics at the Zurich School of Arts and Crafts (Kunstgewerbeschule) from 1949 to 1951, being taught by two renowned professors, Alfred Willimann and Walter Käch. Frutiger went to Paris in 1952 and worked as typeface designer and artistic manager at Deberny & Peignot. His first typeface creations were Phoebus (1953), Ondine (1954) and Meridien (1955), and through the foundry's connections with Photon/Lumitype Frutiger created some of the earliest typefaces for photocomposition.

katherine mccoy Katherine McCoy was born in Decatur, Illinois, in 1945. She studied industrial design at Michigan State University before joining Unimark International in 1967. She went on to work at Chrysler Corporation and Omnigraphics, Inc. In 1971, McCoy became co-chair, with her husband Mike McCoy, of the design department at Cranbrook Academy of Art, which they continued to direct until 1995. By the 1980s, their sometimes controversial programme had established itself as one of the most innovative in American design education, producing a stream of graduates who have gone on to make their own mark in the profession. Their company, McCoy & McCoy, has worked in two- and three- dimensional projects for Formica, Xerox, Unisys, MIT Press, Philips, Tobu Stores Tokyo and other clients.

Lucian Bernhard The Priester Match poster is a watershed document of modern graphic design. Its composition is so stark and its colors so starling that it captures the viewer's eye in an instant. Before 1906, when the poster first appeared on the streets of Berlin, persuasive simplicity was a rare thing in most advertising: posters, especially tended to be wordy and ornate. jeff keedy An Interview with Mr. Keedy By Michael Dooley This interview was first published in 1994 in Emigre #30. André Baldinger André Baldinger 2000 The Newut family is a new Grotesque in which the capitals are designed to be the same height as the lowercases. You can chose from three variationes: Classic, Tip or Plain. Each variation has three weights, Light, Medium and Heavy. You can compaire the three variations strait away.

Armin Hofmann Armin Hofmann (HonRDI) (born June 29, 1920)[1] is a Swiss graphic designer. He began his career in 1947 as a teacher at the Allgemeine Gewerbeschule Basel School of Art and Crafts at the age of twenty-six. Hofmann followed Emil Ruder as head of the graphic design department at the Schule für Gestaltung Basel (Basel School of Design) and was instrumental in developing the graphic design style known as the Swiss Style. His teaching methods were unorthodox and broad based, setting new standards that became widely known in design education institutions throughout the world. His independent insights as an educator, married with his rich and innovative powers of visual expression, created a body of work enormously varied - books, exhibitions, stage sets, logotypes, symbols, typography, posters, sign systems, and environmental graphics. He was also an influential educator, retiring in 1987.

Hendrik Nicolaas Werkman Monument for the 10 executed by the Gestapo. Werkman was a member of the artists' group De Ploeg ("The Plough"), for which he printed posters, invitations and catalogues. From 1923 to 1926, he produced his own English-named avant-garde magazine The Next Call, which, like other works of the period, included collage-like experimentation with typefaces, printing blocks and other printers' materials. He also used stenciling and stamping to achieve unique effects. He would distribute the magazine by exchanging it for works by other avant-garde artists and designers throughout Europe. Piet Zwart Piet Zwart (Zaandijk, 28 May 1885 – Wassenaar, 24 September 1977) was a Dutch photographer, typographer, and industrial designer. Biography[edit] Early life[edit]