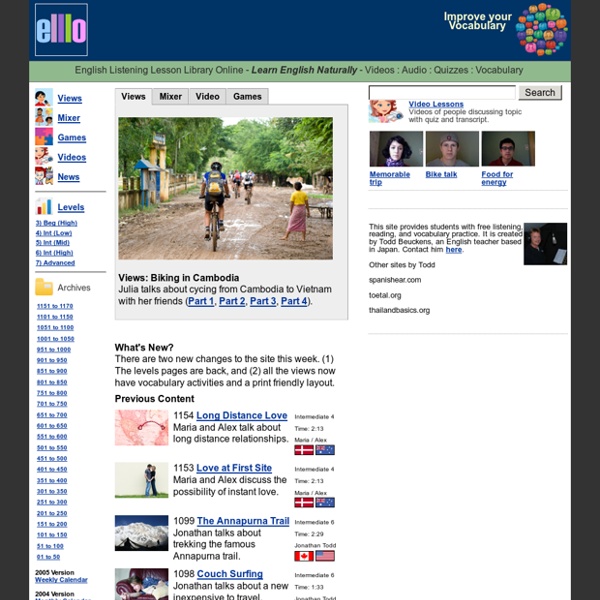 Views: Biking in Cambodia Julia talks about cycing from Cambodia to Vietnam with her friends (Part 1, Part 2, Part 3, Part 4). Mixers : Bad Hair Cut Six people talk about getting a bad haircut. Plus, be sure to check out all the re-edited mixers with new activities 1-25, 26-50, 51-75, 76-100. New Videos for Mixer Listen to over 20 new videos with new speakers from Chile, Argentina, Canada, the U.S. and more. Scenes: Erina in Vancouver Listen as the series ends with Erina starting her new job at Campus Pizza Scene #6 and Scene #7.

Listen to English around the World. Click on any of the flags below to hear accents from some of the main English-speaking countries. Hear more English accents. One of the best ways of improving your English is to listen to radio news and discussion in English on your computer. Using the links below you can get instant access to English language radio news programmes wherever you are in the world, without a radio. "ESL English as a Second Language Listening and Reading Audiobooks" The Girl from Everywhere by Heidi Heilig As the daughter of a time traveler, Nix has spent sixteen years sweeping across the globe and through the centuries aboard her father’s ship. Modern-day New York City, nineteenth-century Hawaii, other lands seen only in myth and legend—Nix has been to them all. But when her father gambles with her very existence. If there is a map, Nix’s father can sail his ship, The Temptation, to any place and any time. But now that he’s uncovered the one map he’s always sought—1868 Honolulu, the year before Nix’s mother died in childbirth—Nix’s life, her entire existence, is at stake.

PodCaz audio 1 50. Catherine from London physical appearance, likes and dislikes 49. Clio from Boston physical appearance, personality, tastes, family language learning theory Age Effects in Second Language Acquisition : OverviewRieko Matsuoka, Ian Smith Abstract Age has been regarded as an important factor in acquiring second languages successfully as well as in acquiring first languages. In this review article, previous studies regarding age and language acquisition are examined, and the ways in which age may affect the process of acquiring a second language are discussed. For instance, some previous research（ e.g., Johnson & Newport, 1989） evidenced the strong negative correlation（r > |－.7|） between age of acquisition/arrival and accuracy or native-like proficiency, which means the younger learners are, the more native-like they become. This correlation supports the critical period hypothesis. The focus of this study is on examining whether the critical period hypothesisin first language acquisition is valid in second language acquisition.

Learning English with Michelle: Listening Welcome to the Listening Page If you want to improve your listening, you must listen to English as much and as often as you can. You need to surround yourself with the MUSIC of the English language. You need to do this without subtitles or captions or reading, just to get the feel of the English language. A 14 year old convalescent cat in the winter by Gavin Ewart - Children's Poetry Archive We're sorry but, for copyright reasons, you cannot print poem texts from this site. Copyright from 'Gavin Ewart Collected Poems 1980-1990' (Hutchinson, 1991)

All Japanese All The Time Dot Com: How to learn Japanese. On you From the Mouths of Babes: A High School Girl Shares Her AJATT Success Story Hey Khatz, I just thought I’d send you an (almost done) success story. My name is Mariah, and I’m a junior in high school; I’ve been doing the AJATT method on-and-off since the summer of 8th grade, but more on that in a bit.

Advanced Level Listening: How to Spot a Liar I noticed that some of you would like more realistic listening practice, so here's another Ted lecture for you to test your listening skills! How are your listening skills? Listening to long English lecture style listenings are an important ability. Students on our university preparation programmes practise listening to lectures, because in American universities, lectures are the main way of teaching. It's a difficult task to listen and take notes for future reference at the same time. This skill is also important if you need to listen to business presentations in English.