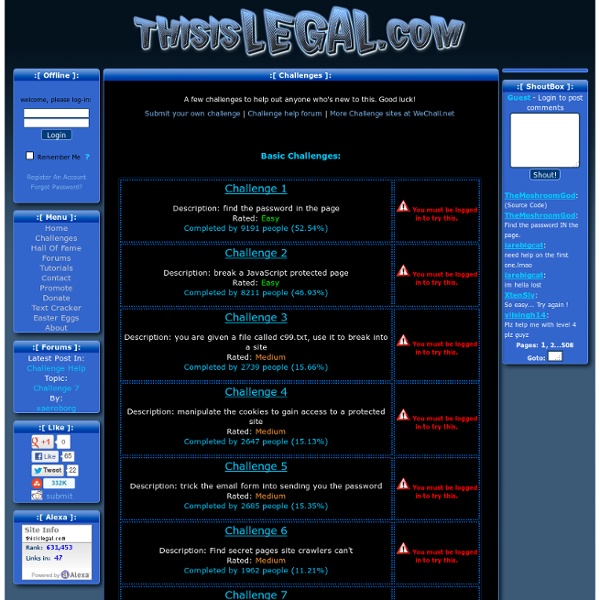 Top 5 Websites To Learn How To Hack Like A Pro You might be surprised to learn just how many people want to learn how to hack. The stereotype is that of the young college guy – a computer science major for sure – who spends his evenings and weekends writing up intricate hacking scripts to break into whatever computer system he can get his hands on. The truth is that what was once a male-dominated community is fast changing into one that includes folks – men and women – from many walks of life, from many countries and with many backgrounds. A recent CNET article about DEFCON makes note of the fact that claims of sexual harassment and unwanted advances are increasing. This isn’t because hackers are getting more obnoxious or offensive, but because more female hackers are entering into the community and trying to find a home there, only to find insulting behavior, and other actions unbecoming of a gentleman.

Wireless network hacking From OLPC English | español These instructions describe how to test wireless networks for security holes and how to use the various security softwares with the XO OLPC. However, great care should be taken in using these tools and software as they may brick your XO in the worst case or considerably bloat your configuration. robot adapts to injury Lindsay France/University Photography Graduate student Viktor Zykov, former student Josh Bongard, now a professor at the University of Vermont, and Hod Lipson, Cornell assistant professor of mechanical and aerospace engineering, watch as a starfish-like robot pulls itself forward, using a gait it developed for itself. the robot's ability to figure out how it is put together, and from that to learn to walk, enables it to adapt and find a new gait when it is damaged. Nothing can possibly go wrong ... go wrong ... go wrong ... The truth behind the old joke is that most robots are programmed with a fairly rigid "model" of what they and the world around them are like. If a robot is damaged or its environment changes unexpectedly, it can't adapt.

The microhydro plant My little paradise has a stream that provides enough water flow and head to run a small turbine, to provide electricity to my home. While writing this, the microhydro plant is being implemented, and here are some photos of the process. Since I usually like to start at the end, the first thing I built is the controller: It is an implementation of Jan Portegijs' "Humming Bird", with some changes and adaptations. The largest cost of the plant, by far, is in the piping for the rather long penstock.

14 Concept Appliances That Need To Be Made Concept appliances give us a peek into the future. They are often aesthetically pleasing and offer interesting and unique features; however, it is a rare concept appliance that makes it off of the drawing board and into the showroom. Unrealistic designs, high production costs and lack of consumer demand are often the reason for many ideas to be scrapped. Yet, here are 14 interesting concept appliances that have made it to the model stage and look so good that we hope they go into development soon.

& Overclock Your Reading Speed This is a guest post from Kim Roach of The Optimized Life. In today’s Information Age, reading is now a prerequisite for success in life. In fact, many presidents, including Kennedy, have required their staff to take speed reading lessons. Brian Tracy, a best-selling author, points out that just 1 hour per day of reading will make you an international expert in your chosen field within 7 years. If you’re looking to increase your learning rate while decreasing your effort, speed reading is a method you should consider studying.

How to use Google for Hacking. Google serves almost 80 percent of all search queries on the Internet, proving itself as the most popular search engine. However Google makes it possible to reach not only the publicly available information resources, but also gives access to some of the most confidential information that should never have been revealed. In this post I will show how to use Google for exploiting security vulnerabilities within websites. The following are some of the hacks that can be accomplished using Google. 1. Hacking Security Cameras Wasting Hackers' Time to Keep Websites Safe Most security software defends PCs and websites by acting like a locked door to shut hackers out. A new security company, Mykonos Software, instead invites hackers in through a fake entrance and plays tricks on them until they give up. “If you break in, I want to have fun with you,” says David Koretz, CEO of Mykonos. Koretz claims that the computer security industry is too timid—he advocates making hackers’ lives tedious and difficult instead.