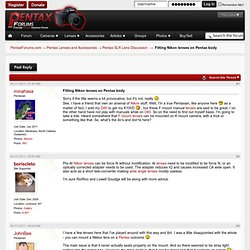 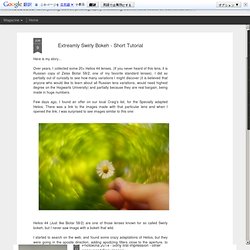 Over years, I collected some 20+ Helios 44 lenses. (If you never heard of this lens, it is Russian copy of Zeiss Biotar 58/2, one of my favorite standard lenses). I did so partially out of curiosity to see how many variations I might discover (it is believed that anyone who would like to learn about all Russian lens variations, would need highest degree on the Hogwarts University) and partially because they are real bargain, being made in huge numbers. Few days ago, I found an offer on our local Craig's list, for the Specially adapted Helios. There was a link to the images made with that particular lens and when I opened the link, I was surprised to see images similar to this one: Modifying Helios 44-2 for extra bokeh? Oh I'm well aware of the size of the task ahead! 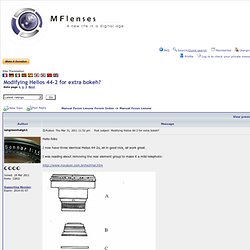 Using Nikon F Lenses On Pentax K Bodies (LBA Post): Pentax SLR Talk Forum. Okay, I guess I'm the only one crazy enough to try this, but I helped a friend sell some camera equipment. 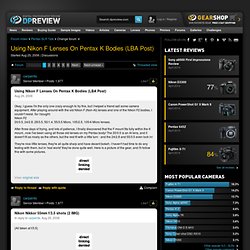 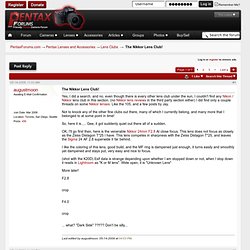 Sure does look sharp Hey.. No adjustments necessary to mount the lens, just stuck it in and rotated it a small amount, and it fits in snugly, but the rotation isn't that much, so not really stable for hardcore use. Then I focus at F2.8, and then set the aperture to the desired one (with camera in AV mode) fire away. Konica AR Mount & Nikon F Mount. Here is the detailed look at both mounts; the Nikon F and the Konica AR. 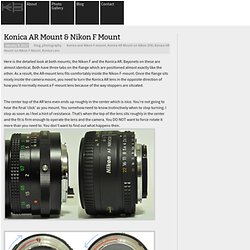 Bayonets on these are almost identical. Both have three tabs on the flange which are positioned almost exactly like the other. As a result, the AR-mount lens fits comfortably inside the Nikon F-mount. Once the flange sits nicely inside the camera mount, you need to turn the Konica AR lens in the opposite direction of how you’d normally mount a F-mount lens because of the way stoppers are situated. The center top of the AR lens even ends up roughly in the center which is nice. Konica AR Mount Lens on Nikon F-Mount. Interestingly, Konica AR mount bayonet is almost identical to the Nikon F-mount. 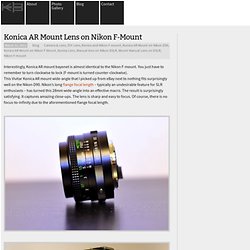 You just have to remember to turn clockwise to lock (F-mount is turned counter-clockwise). This Vivitar Konica AR mount wide-angle that I picked up from eBay next to nothing fits surprisingly well on the Nikon D90. Nikon’s long flange focal length – typically an undesirable feature for SLR enthusiasts – has turned this 28mm wide-angle into an effective macro. The result is surprisingly satisfying. Zenza Bronica Zyxanon 50mm f/2.8 MC DIY-T/S. Zenza Bronica Zyxanon 50mm f/2.8 MC DIY-T/S. It's my Canon EOS 7D with a second variant of a DIY tilt/shift lens affixed to it. The lens is a Zenza Bronica Zenzanon 50mm f/2.8 MC medium format lens. It is mounted via a universal XL CV joint boot (Womi part number 5511006) on a T2 to EF lens mount adapter and it is secured with ABA S20 pipe clamps. The name of the lens is a pun on the original name and the fact that is it now flexible on its X, Y and Z axis. 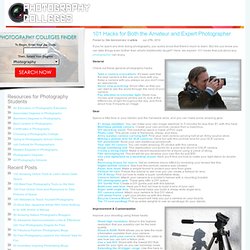 But did you know you can take things even further than what's traditionally taught? Here, we explain 101 hacks that just about any photographer can enjoy. General Check out these general photography hacks. Take a camera everywhere: It's been said that the best camera is the one you have with you. Gear Spend a little time in your kitchen and the hardware store, and you can make some amazing gear. Improvement & Customization Improve your shooting using these hacks. Techniques These hacks offer interesting photography techniques. Lighting. EF 35-80mm for macro. Photography: Technic. Markus Keinaths Photohomepage - Tilt and Shift lens homemmade. A little free time on a weekend results in my third tilt lens for (D)SLR cameras. 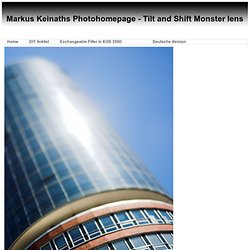 My first Tilt&Shift lens was build ~ 2002 out of a lens back cap and a camera front cap. Both of them were drilled ans rasped to get big holes in the centre. A black balloon (they are hard to find in Germany) was cut and used as the bellow, glued between the caps. This kind of T/S was usabel for macro, if you use a lens with larger flange back distance than the camera, you could use that for infinity too. Build a Tilt-Shift Camera Lens for Peanuts. One of the fancier lenses in the world of SLR and digital SLR (DSLR) photography is the tilt-shift lens. 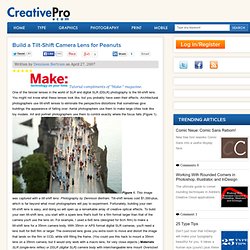