12 cool ideas to tie SHOE LACES । Different Style । Men's Footwear Style Tip. Hyperventilation: Causes, Symptoms and Diagnosis. How To Power Your Home With Your Car. They Say Microwaves Are Bad For You But THIS Is What They Don’t Tell You. According to The Southwest Museum of Engineering, Communication and Computation (SMECC), more than 95 percent of American homes own a microwave oven because it is seen as “almost impossible/pretty difficult” to do without. 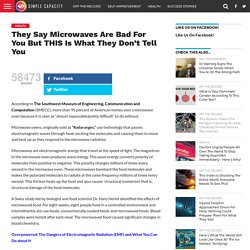 Microwave ovens, originally sold as “Radaranges,” use technology that passes electromagnetic waves through food, exciting the molecules and causing them to move and heat up as they respond to the microwave radiation. Microwaves are electromagnetic energy that travel at the speed of light. The magnetron in the microwave oven produces wave energy. This wave energy converts polarity of molecules from positive to negative. This polarity changes millions of times every second in the microwave oven. A Swiss study led by biologist and food scientist Dr. Overpowered: The Dangers of Electromagnetic Radiation (EMF) and What You Can Do about It “They bounce around the inside of your [microwave] oven and are absorbed by the food you put in it,” writes Dr.

Aggressive Tendencies May Be Revealed By Asymmetry In Body Parts, Study Finds. COLUMBUS, Ohio – Researchers may get some indication of how aggressively an angry person will react by measuring the size relationship between a person’s ears and other body parts, according to a new study. 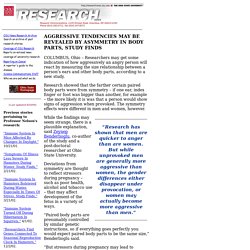 Research showed that the farther certain paired body parts were from symmetry – if one ear, index finger or foot was bigger than another, for example – the more likely it is was that a person would show signs of aggression when provoked. The symmetry effects were different in men and women, however. While the findings may seem strange, there is a plausible explanation, said Zeynep Benderlioglu, co-author of the study and a post-doctoral researcher at Ohio State University. Deviations from symmetry are thought to reflect stressors during pregnancy – such as poor health, alcohol and tobacco use – that may affect development of the fetus in a variety of ways. “But stressors during pregnancy may lead to asymmetrical body parts. The study involved 100 college students (51 men and 49 women).

Biologists Are Figuring Out How Cells Tell Left From Right. In 2009, after she was diagnosed with stage 3 breast cancer, Ann Ramsdell began to search the scientific literature to see if someone with her diagnosis could make a full recovery. 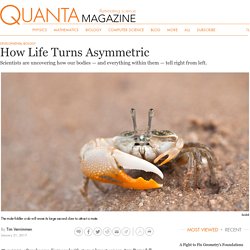 Ramsdell, a developmental biologist at the University of South Carolina, soon found something strange: The odds of recovery differed for women who had cancer in the left breast versus the right. Even more surprisingly, she found research suggesting that women with asymmetric breast tissue are more likely to develop cancer. Asymmetry is not readily apparent. Yet below the skin, asymmetric structures are common. Consider how our gut winds its way through the abdominal cavity, sprouting unpaired organs as it goes. In her early years as a scientist, Ramsdell never gave asymmetry much thought. Years later, after her recovery, Ramsdell decided to leave the heart behind and to start looking for asymmetry in the mammary glands of mammals. Steve Atwood A Left Turn Yet cilia cannot be the whole story. How To Overcome Social Anxiety: Five Powerful Tips Backed By Research.

And the old saying is true: often the fear itself is much worse than whatever you’re afraid of. 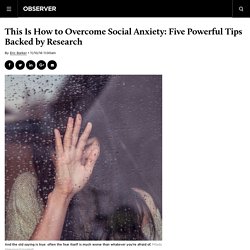 Milada Vigerova/Unsplash Your mind races. Your palms sweat. The words don’t come out of your mouth right, if they come at all. We’ve all been there at one time or another. Nobody wants to look stupid or be embarrassed. While it’s hard to remember what a broken arm feels like, it’s quite easy to remember all the times you felt mortified in public. Individuals can relive and re-experience social pain more easily and more intensely than physical pain.

And the old saying is true: often the fear itself is much worse than whatever you’re afraid of. …perceived job insecurity ranks as one of the most important factors in employees’ well-being and can be even more harmful than actual job loss with subsequent unemployment. And the advice you usually get on how to deal with fear is dead wrong. Your ability to experience positive feelings goes down—but not negative feelings. How To Make Fear Less Scary. 49758.pdf. 10 House Cleaning Hacks That Will Change Your Life.